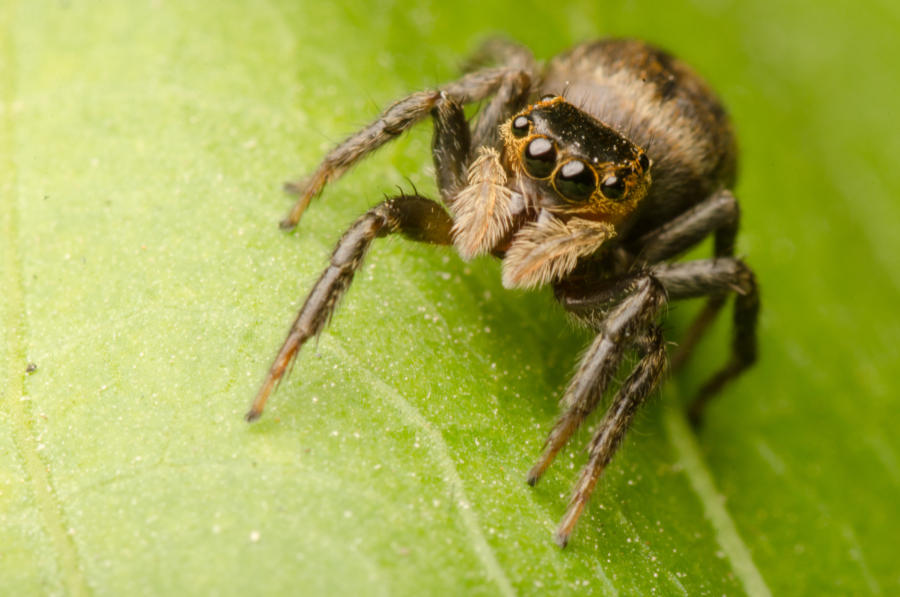 When you are asked what a spider looks like then you will most likely describe it as having 8 legs, spinning webs, and having 8 eyes. While it is obvious that the 8 legs are for better movement and spinning a web helps the spider to catch its prey, it may not be as obvious why a spider needs eight eyes.

As a whole, spiders have 8 eyes to better hunt their prey and to see potential predators. The two eyes in the front can see color, estimate the distance to and recognize the shape and size of objects. The rest of the eyes, usually located on the side of the spider’s face, are usually just for detecting movement.

So if a predator is moving towards the spider from the side the spider will be able to detect the movement with one of its eyes. It will then turn its head in the direction where it detected the movement to identify the potential threat.

The spider does the same when it is hunting. If it detects movement with one of its eyes then it will look directly in that direction with its front eyes to identify the prey. Jumping spiders are an excellent example of that.

Jumping spiders don´t spin webs for hunting they hunt their prey more like a cat or a dog would. By running their prey down.

Not all spiders have 8 eyes though. Some only have two, some have no eyes, and even though I heard of spider with more than 8 eyes I could not find any species or reliable source to veryfi that.

Are There Spiders With More Than 8 Eyes?

This may come as a surprise to you but about 1% of spiders less than 8 eyes.

I found a couple of source mentioning that there are spiders that can have 10 or even 12 eyes but non of these sources mentioned any specific species of spider that has more than 8 eyes.

For example, National Geographics mentioned that there are spiders with more than 12 eyes but they don´t mentione any specific kind of spider that has 12 or even 10 eyes.

And “Reconnect with nature” did the same thing. They mention that there are spiders with more than 12 eyes but don´t give any examples.

I also searched several sites that hold information about different spider species and I could only find spiders with 8 eyes or less listed.

So if you know of a specific type of spider that has more than 8 eyes then please contact us so that I can update this article.

Are There Spiders With Less Than 8 Eyes?

This question, however, I can answer definetivly.

The Caponiidae is a family of spiders that usually have 2 eyes. Some membors of this can have four, six, or eight eyes but most members of these family only have two eyes.

Interestingly, some members of the Caponiidae can develop more eyes as they mature. So they can start out with two eyes and have six eyes when they are mature, for example.

The Deinopidae or net casting spider only has two eyes that can see in the dark. They use their net to catch prey but they use it a little differently than you might think.

They spin small webs between their front legs and then they wait hanging upside down for insects to fly by. Then they catch the insect from midair with the web.

They only have two prominent eyes on the front center of their head.

The most well known spider from this family is the ogre-faced spider. So called because of its looks.