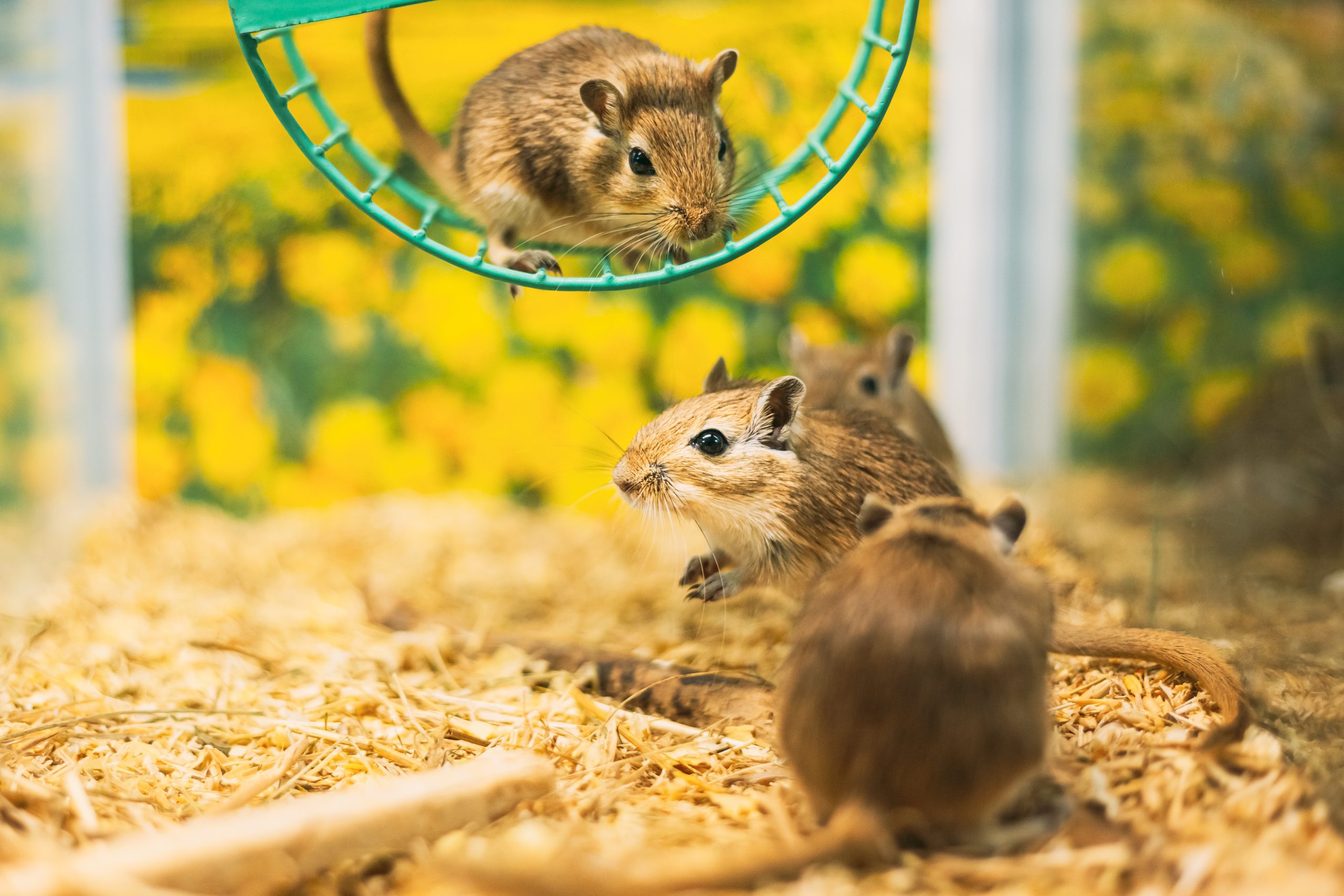 Gerbils are very cute rodents that can make great pets. They live in groups of at least two individuals in the wild and should be kept in pairs or groups of three as pets. They are social animals and they communicate with each other and also with humans if they are kept as pets. Gerbils communicate via various sounds such as speaking, chirping, purring, thumbing and sounds that are too high for humans to hear.

As a whole, squeaking can have different meanings. Loud squeaks can mean that the gerbil is frightened, in pain, or fighting. If the squeaking continues, it is necessary to check if the gerbils are doing ok.

In the following, you will find examples of situations in which gerbils squeak.

What Does it Mean When a Gerbil Squeaks?

Squeaking is one of the noises a gerbil can make to communicate. The sound is very high-pitched and will alarm you when you hear it.

Squeaking can have different causes and all of them are associated with either fear, pain, unease, panic, anger, or aggression.

Here are some situations, in which a gerbil might squeak.

Gerbils are social animals and live together in groups of at least two individuals. They care for their family members and protect them. But gerbils that do not belong to their family will be fought.

When gerbils that do not know each other are being put together in an enclosure, it is very likely that they start fighting. This is why it is important to follow a certain protocol if you are planning to introduce new gerbils to an existing group.

You can find a step-by-step plan on how to introduce a new gerbil in the article “Can my gerbil live alone”. If you follow the steps, you can prevent fighting and injuries.

Young gerbils that tend to question the social hierarchy are also often tempted to fight the highest-ranking gerbil.

During a fight, gerbils often squeak because they don’t hold back. If you notice that the fight is getting out of control, and a gerbil might get injured, you have to intervene and separate the fighting parties. Do never grab a gerbil during a fight without some gloves that protect your hands. The gerbils will bite your hand which can lead to serious injuries.

Gerbil is Injured and in Pain

Injuries can be a result of fighting or of an accident of any kind.

When a gerbil accidentally falls from a higher location, it might break a bone. Fractures can lead to constant pain and even though smaller fractures usually heal quickly, you should take the gerbil to the vet to make sure that it will be alright.

It doesn’t always have to be a serious injury that causes pain. If for example the tail gets stuck somewhere, or a paw is pinched, the gerbil will also squeak in pain.

The Gerbil is Startled

If your gerbil squeaks, when you try to pick it up, it did not see you coming. Always try to pick your gerbils up in a way that they know what’s happening, otherwise, you might get bitten.

The Gerbil is Panicking

A gerbil that got stuck somewhere or is in any kind of situation that causes extreme stress, the gerbil might panic and start squeaking.

Loud noises from the TV, playing with children, barking dogs, vacuum cleaners, and other loud devices can also cause extreme stress for gerbils.

A stressed gerbil does not necessarily squeak. If can show other signs of distress such as hiding, changing eating and toilet behaviors, aggressions towards other gerbils or against you, obsessive behaviors of any kind, or a lack of appetite.

Since stress can cause serious health problems and can even lead to seizures and death, you should try to avoid situations in which gerbils are constantly under stress.

The Gerbil is Angry

A gerbil that is about to fight, or is very angry about something might squeak as well.

You will be able to tell by the body language, if the gerbil is frightened, in pain, or angry.

An angry gerbil sometimes poofs the fur on the back, thumbs with the legs, or moves the tail very quickly from one side to another.

Never try to touch a gerbil that shows that kind of behavior. The chances are very high that the gerbil will attack you.