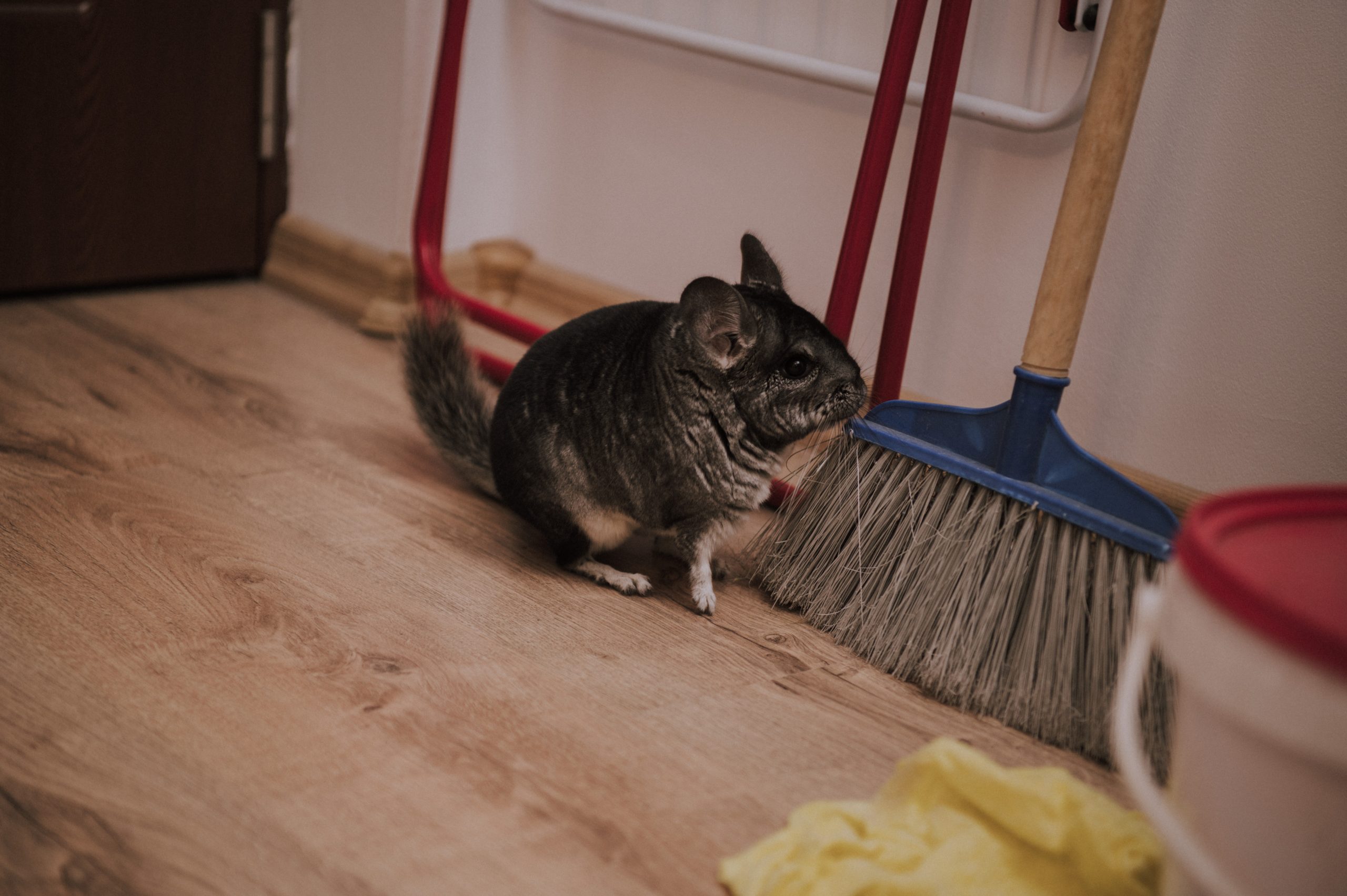 Chinchillas are rather shy animals by nature and tend to hide and escape in case of a potential threat. In the wild, chinchillas warn each other with a barking sound, if they see or hear any predator or danger to their colony. All chinchillas will hide and wait until they know more about the situation. They are not only shy animals, but they are also very energetic, active, and love to chew on stuff. All these things could be reasons for chinchillas escaping an enclosure or a grip by a human.

In the following, you will find ideas on how to stop a chinchilla from escaping the cage, information on why a chinchilla likes to be outside of the cage, and how to handle a free chinchilla.

Why Does My Chinchilla Try to Get Away From Me?

As a whole, chinchillas need a lot of time to trust their owner. Not all chinchillas like to be held or cuddled and they tend to show their annoyance by trying to get away from the situation that stresses them.

If a chinchilla tries to get away from you, it might be annoyed and prefers to play, or it might actually be stressed by the situation and maybe even scared or angry. Try to read the body language of the chinchilla. If the body is very tense and it tries desperately to get away, do not hold on to your pet. Always remember: It’s still a living creature with free will and needs to be treated with respect, just like you and me.

How do I Stop My Chinchilla From Escaping the Cage?

Chinchillas have teeth that grow all their life long. In order to keep them at a healthy length that allows them to eat normally, they need to chew materials such as wood and hay.

In captivity, chinchillas will chew basically anything that they can find. That includes wooden toys, houses, shelves, plastic, and sometimes even metal wires. In some cases they are able to chew holes into the enclosure, in other cases, the enclosure has slots where a small chinchilla can fit through. Some cages have doors that cannot be locked properly.

To keep chinchillas from escaping from their cage, it is necessary to acquire an enclosure that is suitable for chinchillas and cannot be chewed through, squeezed through, or opened by the chinchilla.

If a chinchilla keeps escaping the enclosure, it’s not the chinchilla’s fault, the cage is simply not suitable for chinchillas.

Cages for cats or dogs have gaps that are big enough for a young chinchilla to get out. Do not underestimate the flexibility of a chinchilla.

The doors must have a locking mechanism that is escape-proof, and the bottom should be made of solid plastic with not possible for the chinchilla to chew through.

Find our recommendations for a good chinchilla cage and the criteria you should be looking at in this article: What is the best enclosure for a chinchilla?

Do Chinchillas Like to Be Out of Their Cage?

Chinchillas are very energetic and active animals that need a lot of exercises. They love to run and jump around and explore new things. That is why a chinchilla needs some time outside of the enclosure every day. It is recommended to offer a chinchilla around one hour daily to play in a playpen or a chinchilla-proof room outside of the cage.

As a whole, chinchillas like to be out of their cage because they enjoy exploring new places and new things. This is why they love their time outside of the cage in a chinchilla-proof room or a playpen.

Chinchillas should not be let out of the cage if they are not tame yet, because it will make it very hard for you to get the chinchilla back into the cage. It is also super important to make sure that the chinchilla cannot escape from the room or the playpen.

Hide all things that could be a potential threat to chinchillas such as electronic devices, wires, and human food.