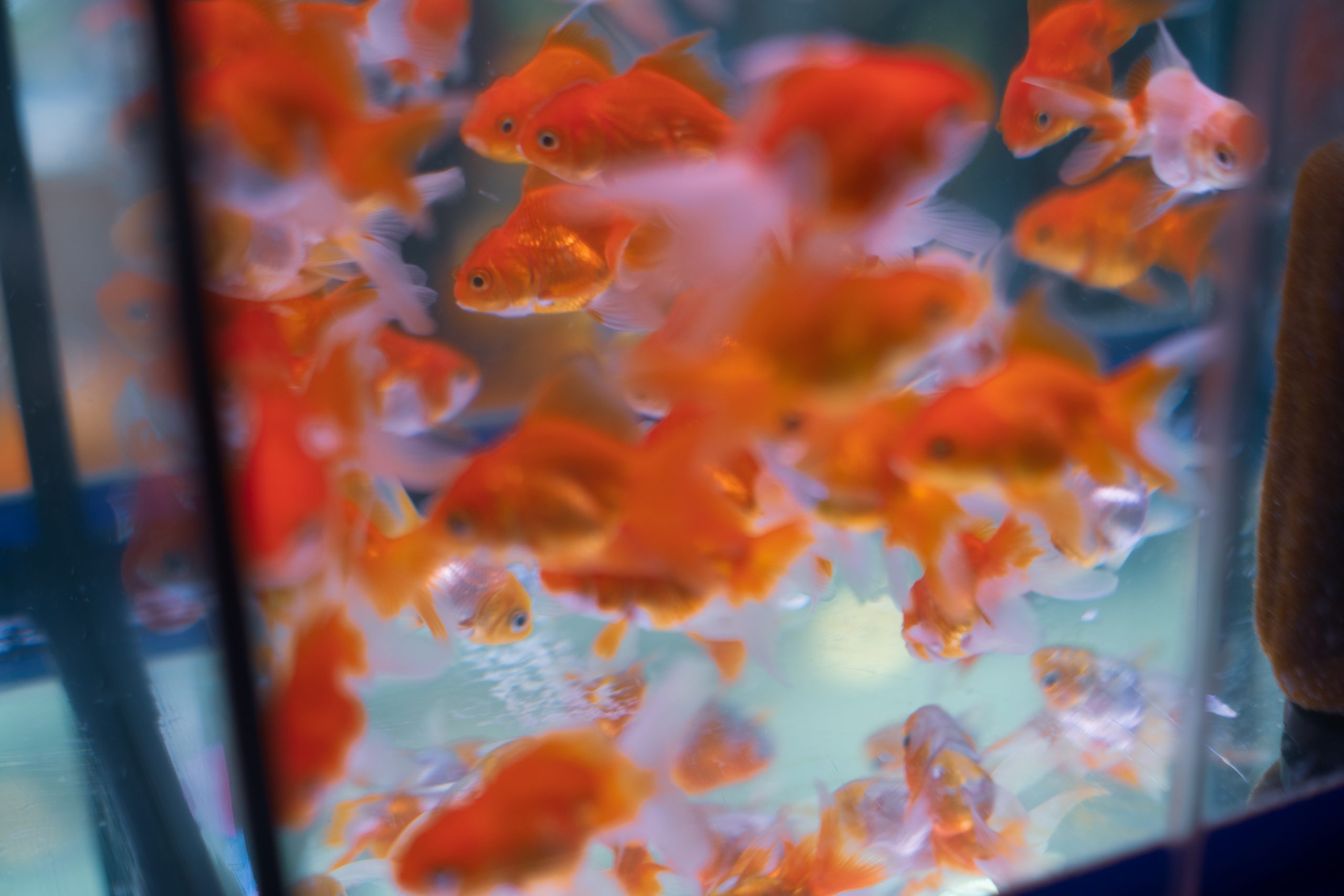 Goldfish are among the most popular pet fish and are known for being kept in bowls. That’s how they are being promoted and shown in movies, comics, and books. Therefore many people believe, that goldfish can be kept in small bowls. Unfortunately, this is a huge misbelief that leads to many dead goldfish.

As a whole, two goldfish require a tank with 30-40 gallons of water (114 – 150 Liter). For every additional goldfish, 10 more gallons (38 Liter) have to be added to the tank size. The size is required to prevent ammonia poisoning which is one of the most common causes of death for goldfish.

What Tank Size for Goldfish?

Most people assume that goldfish only need small bowls. But unfortunately, this is a common misbelief.

This leads to a very big aquarium for these tiny fish, and you might be wondering if this is correct. Here are the reasons, why goldfish need big tanks.

Goldfish in pet stores or at fairs are tiny. Those are baby goldfish. If a goldfish is properly kept and treated, it can grow up to 12 inches. Imagine a 12-inch-long goldfish in a tiny bowl.

People often assume that goldfish can only grow up to the size of the tank they are in. But in fact, goldfish grow, no matter what the size of the bowl is. It is true, that the body of the goldfish stops growing if the tank is too small. But the organs, fins, and spine continue to grow.

In the right environment with a big tank, goldfish will thrive and will be able to grow to their full size.

If a tank is either too small or overcrowded, the oxygen level can be too low for goldfish. If goldfish are gasping for air at the surface, this is a clear sign of the lack of oxygen in the aquarium.

Ammonia Poisoning as Common Cause of Death

The most common cause of death for goldfish is ammonia poisoning. This can happen quickly if the tank is too small.

You see, goldfish produce a lot of organic waste. And that waste contains ammonia.

In nature, the goldfish lives a happy life in a lake or river and the ammonia can be broken down by beneficial bacteria in the water.

Unfortunately, these beneficial bacteria do not exist in a fishbowl. And before a goldfish is introduced to a new aquarium, this good bacteria should already be in there.

The process of growing good bacteria in a new tank is called “cycling” and can take several weeks. If that is not done, the goldfish literally poisons itself with poop.

A big tank is needed to have enough space for good bacteria to grow and for the ammonia to be broken down before it gets dangerous for the goldfish.

What Size Tank is Appropriate for 2 Small Goldfish?

A good aquarium size for 2 goldfish is 30-40 gallons of water. The size of the goldfish should not be a criterion to choose a smaller or bigger bowl.

Goldfish breathe oxygen in the water and produce ammonia. These are the factors that have to be taken into consideration when it comes to choosing the right size for the tank.

Goldfish are a species that needs large tanks with big surfaces, a proper filter system, and sometimes even an additional air bubbler.

If you want to go with a smaller tank, choose a different species.

Can 2 Goldfish Live in a 2 Gallon Tank?

Two goldfish cannot live in a 2-gallon tank. They will quickly die.

They could either suffocate because of the lack of oxygen in the water, or be poisoned by ammonia which they produce themselves. Both are not very pleasant deaths considering the fact, that they could live up to 10-15 years.

Two goldfish need at least 30-40 gallons of water in their tank with a good filtration system, treated water, and beneficial bacteria growth.