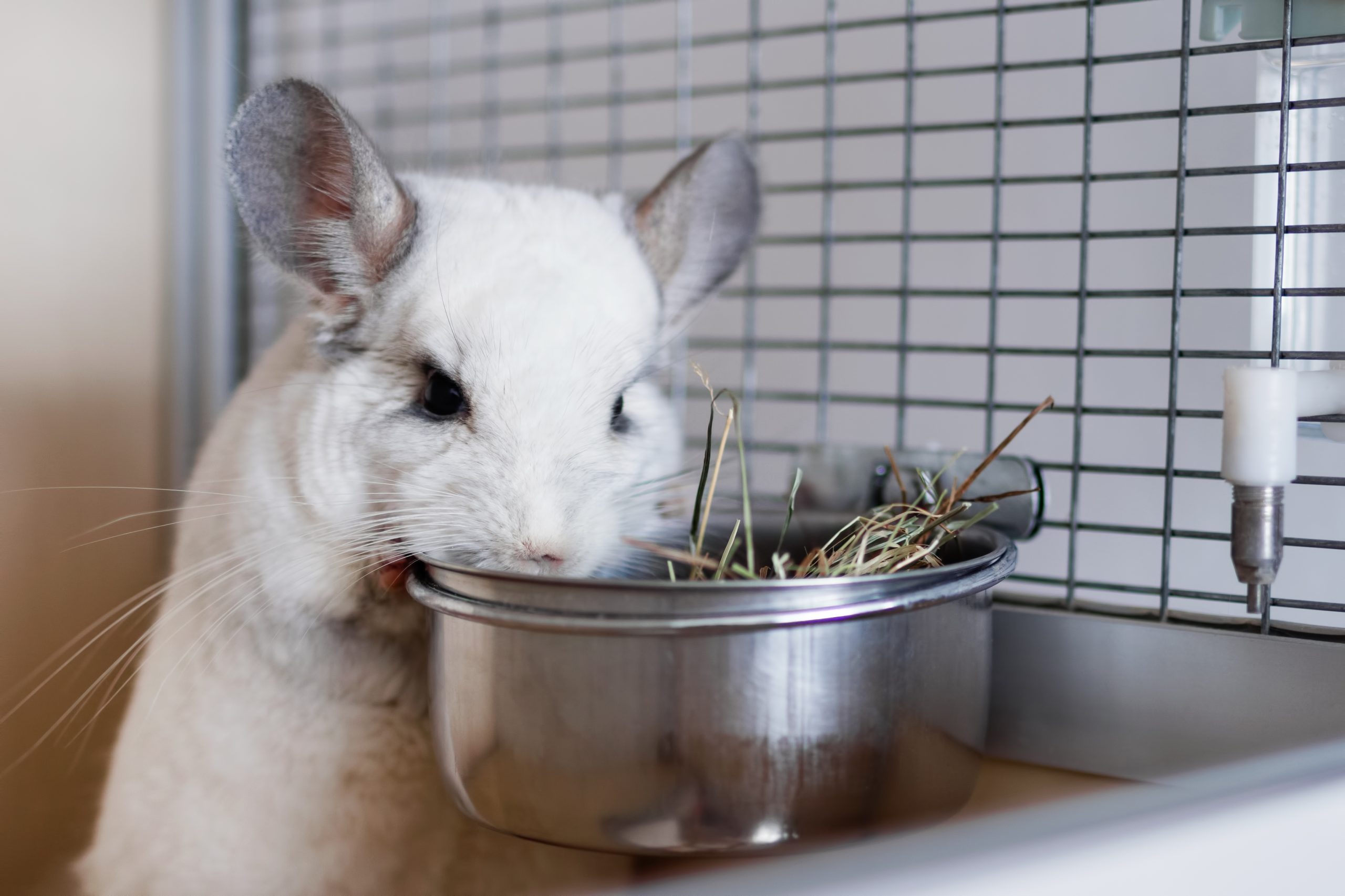 Chinchillas are super cute furballs that can be kept as pets. In the wild, they feed only on grasses that grow in the mountainous regions of the Andes. In captivity, they can be fed hay, grasses, and pelleted food to add some more protein to their diet. Since hay is the most important component of their diet, it is important to find the right hay for your lovely chin.

As a whole, there are many different types of hay with different levels of fiber, calcium, and protein. Timothy hay is good for the daily supply and can be supplemented with small amounts of other types of hay to provide a well-balanced nutritional diet.

In the following, you will find information on the different types of hay and some criteria to find the perfect hay for your chinchilla’s needs.

Which Hay is the Best for Chinchillas?

This question cannot be answered without some more information. There are many types of hay with different compositions.

Any hay contains fiber, which is important for the chinchillas’ digestive and dental health. It helps them to keep their teeth at a healthy length.

If the teeth get too long, this can cause serious health issues and lead to infections, and even starvation.

Most hay types contain around 30% of fiber, which is good for chinchillas.

A higher amount of calcium can lead to bladder stones for chinchillas. This is why types of hay with a higher calcium level, such as Alfalfa Hay, should only be offered as a treat.

However, very young chinchillas and females that are breeding do need a little higher level of calcium in their diet.

A healthy protein level in the diet is important for healthy fur. The fur of a chinchilla is the densest that exists on this planet. They need that kind of fur to survive the weather and temperature conditions in the mountainous regions where they originally came from.

A healthy amount of protein for an adult chinchilla is around 14% to 16% of their diet.

Adult chinchillas are usually fed with Timothy Hay and some other hay types in addition, in order to make their diet fun and interesting. Some adult chinchillas don’t like Timothy hay. In that case, you can try out other types of hay that are listed below, and find the perfect composition for your pet.

The right hay is very important for chinchillas. It is the main component of their diet, helps them to keep their digestive system healthy, and is also important to keep their constantly growing teeth at a healthy length.

It is important for their dental health to chew on hay, and the chinchillas should have access to their hay at all times. Not every chinchilla will happily eat any hay. Some are pickier than others. But don’t worry, you will find the right hay composition for your chinchilla.

And don’t worry too much about the perfect hay mixture. As long as you offer them some high-quality hay, which is suitable for chinchillas, you won’t do them any harm. But imagine, you have to eat the same food every day. It might get a little boring. This is why many chinchilla owners tend to offer their pets a different type of hay from time to time, to keep things interesting.

Chinchillas should receive pelleted food in addition to their hay, but this article will only go into detail on the different types of hay.

In the following, we will look into the different types of hay, their nutritional content, and why a certain amount of certain hay might be good for your chinchilla.

What is Timothy Hay?

Timothy hay is not a brand name, but it’s a type of hay. It is named after a farmer of the 18th century (Timothy Hanson) who cultivated and sold this type of hay.

It is a type of hay with high fiber, high energy, low protein, and low calcium levels. It’s perfect for a chinchillas digestive system and dental health.

Timothy hay is great bulk hay. It is the most common and most popular pick for chinchilla owners. Timothy hay is high quality and can be ordered in big boxes which will save you some money.

What is Alfalfa Hay?

Alfalfa is a legume hay. The protein and calcium levels of Alfalfa Hay are higher than of Timothy and Meadow hay. It is sweeter than Timothy and chinchillas enjoy it a lot, but it should be an occasional treat due to the higher levels of calcium and protein. It also comes with higher calories.

What is Alpine Grass?

Alpine Grass comes from high regions and can be used as complementary hay. It has often added flowers in it.

What is Orchard Grass?

Orchardgrass is a type of mountain grass that is similar to Timothy hay but has a softer touch and is greener with a somewhat fruity smell. If your chinchilla does not like Timothy hay, you can try Orchard Grass instead. Make sure that the Orchard Grass smells fresh before you feed it to your pet.

Orchard Grass is high in fiber, and a little higher in calories than timothy. It also comes with a slightly higher level of protein and a low level of calcium. It makes a good substitute to Timothy hay from time to time.

What is Meadow Hay?

Meadow hay is softer than Timothy hay and contains more different plats such as dandelions. It is very similar to Timothy hay.

What is Oat Hay?

Oat hay is a type of grain hay. It is rather rough, but still sweet. As the name suggests, it is made of the grass that oats are harvested from.

It can be fed occasionally in small quantities, but oat grain heads contain a lot of protein and are high in calories, therefore it should be used as a treat and not as normal food.

Hay racks are a great item for a chinchilla cage to feed your pets. It will help you to reduce the amount of hay mess that chinchillas usually create. Even though scattered hay is not an issue per se, chinchillas might slip with too much hay on the ground.

You can use a standing hay or grass tray, a hanging one, or one that is fixed on the wall of the cage.

Wood and metal are both safe materials. If you go for wooden hay trays, your chinchillas will chew on them. It’s good to wear down their teeth, but it also means that after a certain time, you might need a new one.

Make sure to use only wood that is safe for chinchillas.

Plastic is not good for chinchillas because they tend to eat it, and it can cause serious issues in their digestive system.

Here are the best feeders and hay racks that we can personally recommend for feeding chinchillas:

Hay cubes are great to keep your chinchillas entertained and also to offer them hay as a treat, such as Alfalfa hay from time to time. It also helps to reduce the scattered hay on the ground.

The two best hay cubes that I can personally recommend are Timothy Hay cubes and Alfalfa Hay cubes as treats. You can follow the links to see the prices on Amazon.