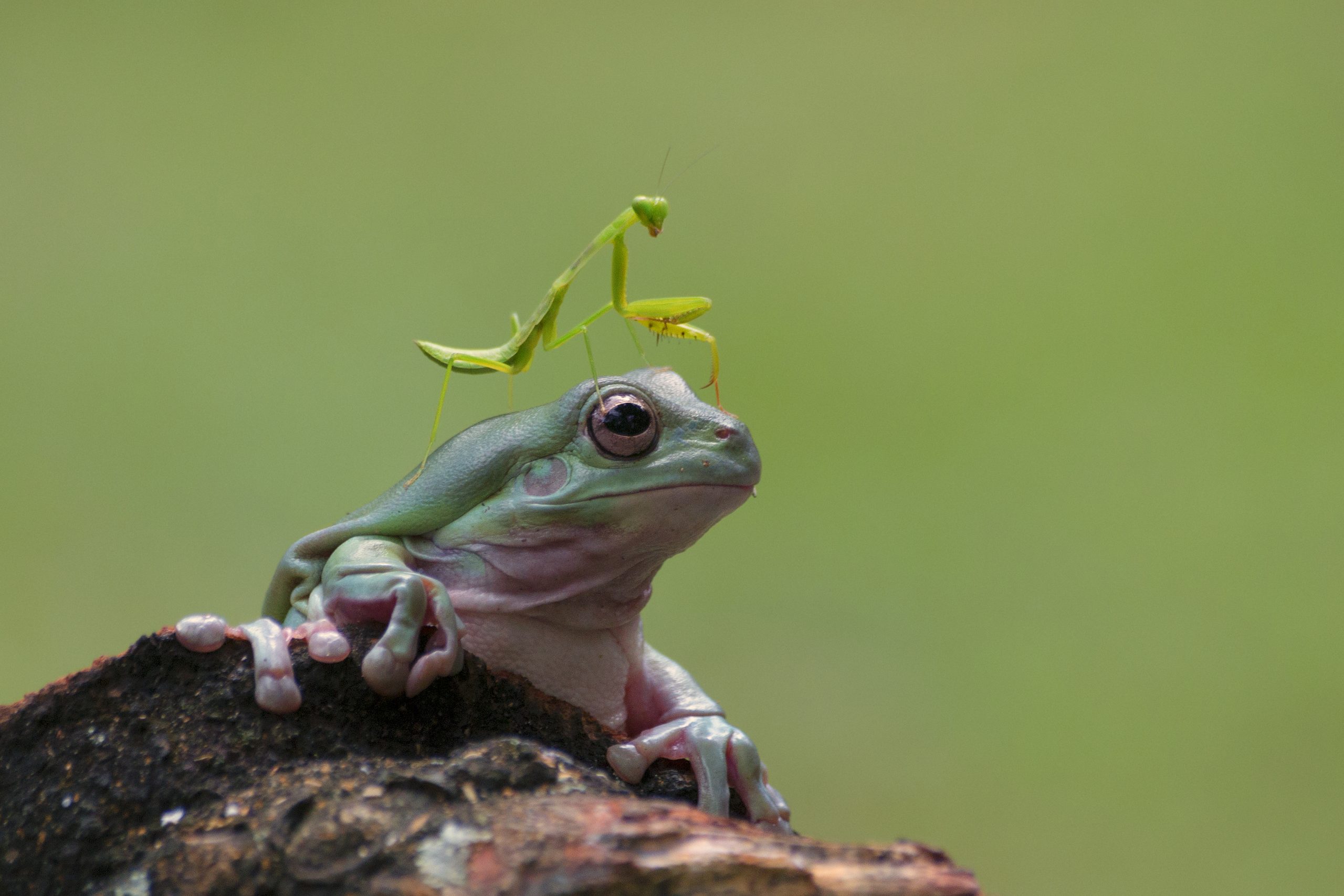 Praying mantis are super cool creatures that make interesting and hardy pets. They have a unique appearance and are completely harmless to humans. With their crazy eyes, sharp and folded claws, and tilting movements, they are fun to watch. You might be planning to catch or buy a praying mantis and keep it as a pet. This can be a fascinating experience. But what can you feed praying mantis?

As a whole, a praying mantis only eats live insects, reptiles, and in some cases even birds that are small enough. It always depends on the size of the mantis. Prey for baby mantis could be fruit flies or springtails. Bigger mantis can eat crickets, small cockroaches, worms, spiders, or caterpillars.

What to Feed a Pet Praying Mantis

The diet of a praying mantis in the wild includes all kinds of insects, reptiles, amphibians, and even mammals. Their prey depends highly on the size of the praying mantis.

The age of a mantis is counted in their molts. When a praying mantis is born, the development stage is called L1, or first instar. It’s before they molt for the very first time. After their first molt, they reach L2, or second instar. This continues until their final molt.

Males molt until they reach L7, while females reach L8 or L9.

A baby mantis in L1 and L2 can only be fed the tiniest insects such as fruit flies or springtails. There are species that are wingless and can be acquired in pet stores such as the small Drosophila melanogaster.

If your mantis is not that tiny anymore, you can also try the Drosophila hydei, this is a bigger fruit fly version.

Once they are a bit bigger, you can offer them pinhead crickets. Every praying mantis species is different in size. Make sure that the insects you feed them are small enough and the insects cannot harm your mantis.

If the mantis is big enough, you can offer him or her cockroaches, moths, grasshoppers, and mealworms.

They will deny any food if they are planning to molt soon, and they don’t eat during they molt. If they deny the prey, remove it from the tank you are keeping the praying mantis.

During their molt, they are vulnerable, and right after their molt, their skin is still very soft. Prey can easily become predators and nibble on the praying mantis which could even lead to death.

Praying mantis do not eat fruit. They only eat meat that comes from insects, reptiles, amphibians, and some small mammals.

As babies, praying mantis enjoy fruit flies and springtails as well as other tiny insects.

Praying mantis do not eat vegetables. They don’t eat anything else than meat in form of any living creature as long as it is small enough to be prey. Praying mantis will eat pests on fields that eat the vegetables and fruits, but will not want the cultivated plants. Plants are their hiding place, not food.

You will often see praying mantis around fruit and vegetables but not because they want to eat the fruit but because they are waiting for insects to come around so that they can hunt those.

Praying mantis do not actively hunt their prey they will sit around in locations where it is very likely that prey comes along and then they sneak up on the prey to quickly snatch and devour it.

Praying mantis eat ants, but they are not their only food source. They enjoy all kinds of insects, small reptiles, amphibians, and mammals. Ants are just one of the many meaty food sources of a praying mantis.

Some praying mantis can eat rats. If a praying mantis eats a rat or not highly depends on the size of the mantis. While smaller mantis will hide from a rat, others will see it as prey and eat it.

I have to mention at this point that the praying mantis does not have any kind of venom nor does it instantly kill its prey.

It will catch and hold its prey in its claws and then start eating it while it is still alive.

So in order for a praying mantis to eat a rat, it has to be strong and big enough to catch and hold it in its claws while the rat is flaying around.

Praying mantis do not eat dead bugs. They only catch and eat animals and insects that are still alive. They will leave dead bugs untouched and look for living prey that they can hunt.

The reason behind this could be their special way of seeing.

Praying mantis are the only insect on your planet that have a three-dimensional vision. Their sight is focused on movements to be able to see approaching prey.

There is a possibility, that a praying mantis does not recognize dead bugs as food because it is not moving.

Is Honey Good for a Mantis?

Many praying mantis keepers claim that their mantis enjoys honey. But praying mantis are carnivores and eat neither plants nor honey in the wild. They do sometimes catch bees, but honey is not part of their diet.

How Long Can a Praying Mantis Live Without Food?

Praying mantis don’t need to be fed every day, once they are a bit older.

Baby praying mantis can be fed every day with tiny insects, but once you start feeding your praying mantis bigger prey, there is no need to feed it every day. It is even worse for their health if they eat every day and it is rather beneficial if you wait a few days before you feed again.

You can see if the stomach of the praying mantis is still big from the last meal, or if it might already be hungry again.

Adult praying mantis can be fed every 3 – 4 days.

Depending on the species and the size of the praying mantis, it can go up to 2 weeks without food.

If praying mantis is molting, they don’t need any food right before or during that process.

What do praying mantis drink?

In the wild, praying mantis live between leaves, flowers, and other plants where they can hide. They won’t crawl down to drink from any puddle, lake, or river. The liquid they consume is water from the surface of plants.

If you keep a praying mantis at home, the easiest way to offer it enough liquid is to spray water into the tank and on the decoration twice a day, keeping the humidity up at all times.

The water you can use depends on where you live. The safest water for praying mantis is spring water.

Some people use tap water, but that highly depends on whether your tap water is free from any chemicals.

Chlorine and chloramine have the potential to kill a praying mantis and are present in many tab waters around the world.