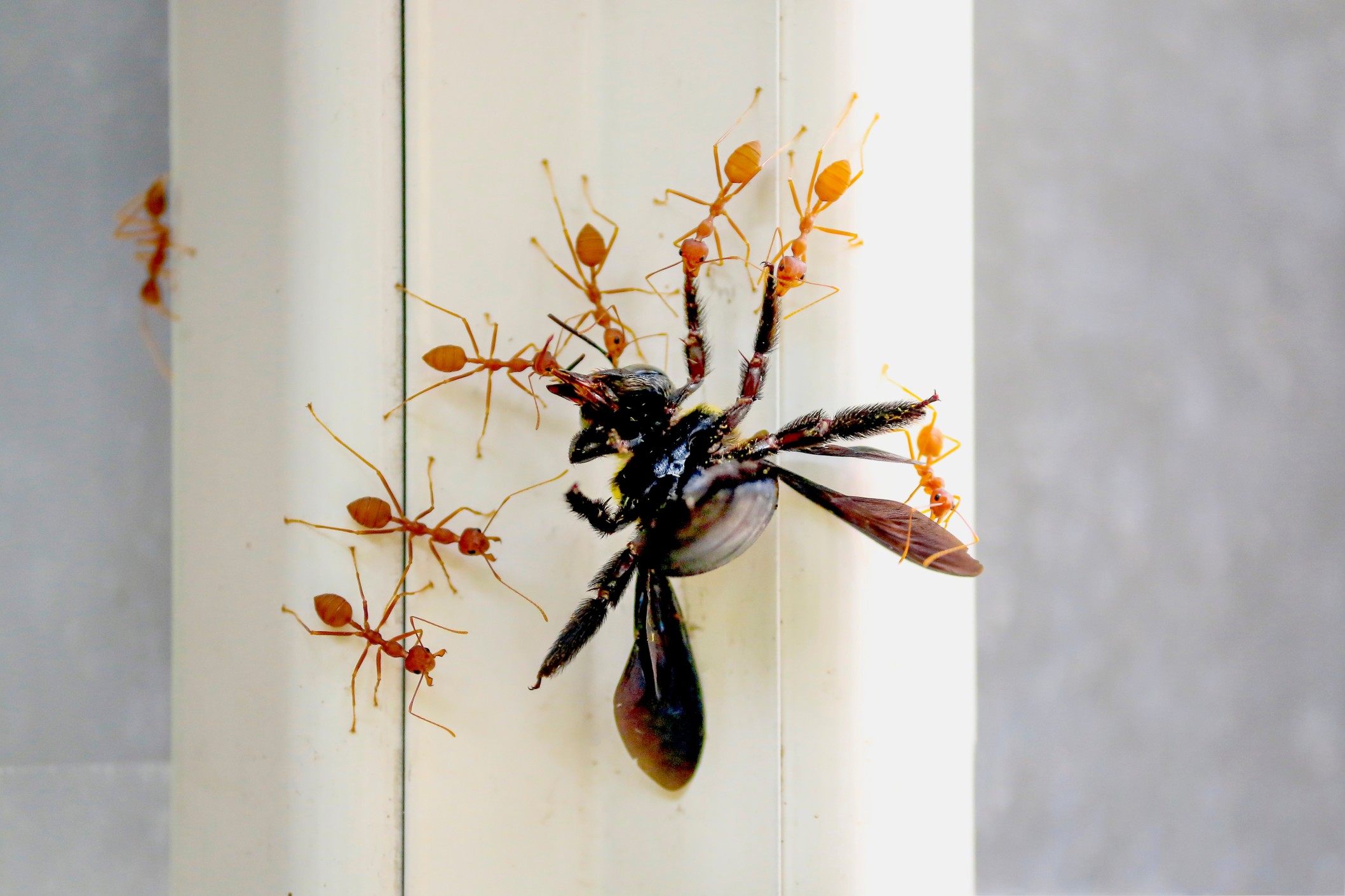 Fire ants are amongst the most dangerous types of ants in the world. Especially the red fire ant, Solenopsis invicta, is very common in South America and the south of North America.

Their invasive character, paired up with very aggressive behavior, makes them a very well-known and dangerous ant. They are fascinating little creatures, invading states and countries, surviving floods by forming rafts with their bodies and replacing and pushing away native species of ants. They are true masters of survival and they are not picky when it comes to their diet.

As a whole, fire ants eat basically anything. They are omnivores. That means that they eat both plants and animal matter. The size doesn’t matter as they chop up their meal into tiny pieces. They won’t even stop at reptiles, amphibians, or mammals but they prefer soft, moist, and sweet food.

If you plan on keeping fire ants as pets then consider reading our article about fire ants and if they are good pets to keep right here. Because especially for beginners fire ants might not be the right species to start with.

What is Typically on a Fire Ant Diet Plan

There is not much, a fire ant won’t eat. Just like most ants, fire ants need carbs, protein, and freshwater to survive.

They have preferences, such as sweet stuff in general and rather moist food, but in the end, will simply eat everything.

Fire ants are very easy pets to feed. They will happily take in anything you offer them.

Out in the wild, they feed off plants, insects, reptiles, and smaller mammals.

You can offer your pet ant colony a variety of things and they will gratefully chop it down, no matter what it is.

These are things you can offer your ants:

In addition to the liquids, your fire ants will appreciate any kind of protein you offer them.

They like all kinds of insects such as crickets, worms, cockroaches, termites, centipedes, or even spiders and scorpions.

What is a Fire Ants Favorite Food

Fire ants cannot eat big pieces of food and have to disassemble everything before they eat it. Therefore they prefer liquid food, which makes it easier for them to digest.

What attracts fire ants most are sweet liquids such as sugar water and sugary, soft, and moist fruits such as watermelon or banana.

If fire ants made it inside your house, they will go for pet food, spilled juices, any food crumbs, cooking grease, and sugar of any kind.

But as mentioned before, they will also eat anything else you offer them.

You can prepare your fire ants a proper meal, freeze it and feed it bit by bit.

Here is a fire ant recipe, that I found on the website of Texas A&M AgriLife Extension:

Brown the hamburger meat and drain the fat. Heat the water over a medium flame and slowly add the gelatin while stirring constantly. Then add the sugar and stir until dissolved.

Mix the eggs in an electric blender with the salt and vitamins; slowly add the hamburger. Stir this mixture at low speed for 2 minutes.

Add the mixture from the blender to the water solution and cook until it begins to thicken (not boil).

Remove the mixture from the heat, pour it into a pan and allow it to cool. Cut the solidified, prepared ant food into cubes and freeze until ready for use.

How do Fire Ants Find Food?

Fire ants have a great way of communication. They have worker ants randomly running around, looking for food.

If they find something worth going for, they will deposit pheromones to guide other ants from their colony to the food.

The fire ant, which found the food, will make its way back to the colony, leaving trail pheromones everywhere along her way until she reaches the nest or any entrance to the colony.

More and more ants will follow the trail and find their way to the food source.

Can Fire Ants Eat a Human

Fire ants are well known for their aggressive behavior. But could they eat an entire human being?

There are no records of a fire ant colony disassembling a human, but fire ants are known for attacking any intruder, no matter the size. Usually, a human would be able to run away, but given the fact that the venom of the fire ant can cause anaphylactic shock and has already killed some people, it is not unrealistic that fire ants would kill and eat humans.

Fire ants do not hesitate to exploit cadavers of mammals so it would not be surprising if they would even go for a human cadaver.