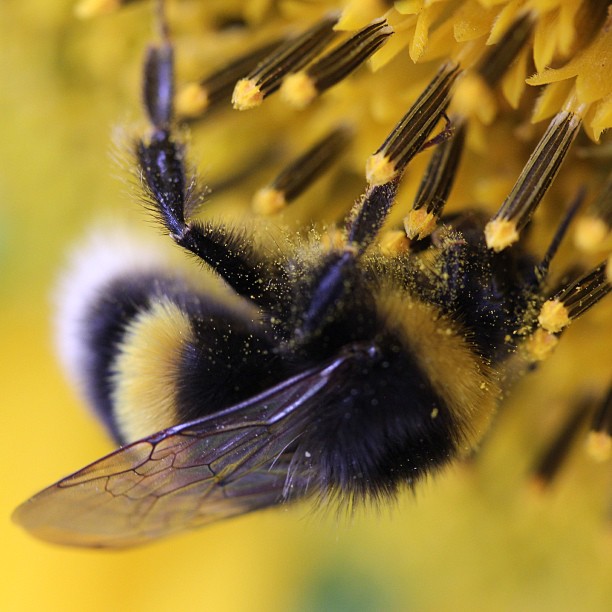 Bumblebees are probably amongst the cutest flying insects out there. They are big, hairy, and have cute little faces plus they don´t sting humans as often as bees or wasps. So it is understandable that you might want to feed the bumblebees in your garden to help them but what do they actually eat and should you even feed them anything in the first place?

Bumblebees eat nectar and pollen but they will also eat honey and sugar water if they stumble upon it. They are pollinators, just like bees, so they should not be fed directly or they will stop pollinating flowers. Instead, planting some flowers or a flowering bush will help them the most.

There are instances where you can feed a bumblebee some honey or some sugar water.

If you find a bumblebee crawling around on the floor aimlessly and seemingly disorientated, for example, then you can give it some sugar water or a little bit of honey to help the bumblebee regain its strength.

The Diet of a Bumblebee

Did you know that bumblebee workers and queens have slightly different diets?

A bumblebee worker will mostly eat nectar from flowers. It will bring whatever nectar it doesn’t eat back to the nest. The bumblebee queen, however, will mostly eat the pollen from the flowers as it has more protein. The queen needs the protein to produce more eggs.

Bumblebee workers will swarm out and find blooming flowers. It will then collect the nectar from within the flower but while doing so some of the pollen of the flower will stick to the hairy body of the bumblebee.

Then the worker will fly to the next flower collecting more nectar and leaving some of the pollen behind on the new flower, pollinating it.

Once the worker collected enough nectar it will return to the nest and store the nectar. At this point, the bumblebee worker will also be cleaned from the pollen that is still attached to it.

This pollen will then be brought to the bumblebee queen to digest.

Workers primarily eat nectar but they will also eat pollen from time to time if they need some protein.

The diet plan of the queen is much different than that of a worker.

The queen primarily eats pollen that the workers take home into the nest. The pollen has much more protein than nectar and the queen needs that protein to produce eggs.

A young queen won´t be able to lay eggs before she can eat her first pollen. The pollen contains chemical compounds that will activate the queen’s ovaries.

This is a safety measure that will prevent the queen from laying eggs until the first winter is over. Once the first flowers bloom and the queen ate the first pollen only then will she be able to lay her first eggs.

The queen will mostly eat pollen but she will also eat some nectar here and there when she needs it.

You should never feed pollinators too much or they will simply stop pollinating.

Pollinators such as bees and bumblebees are really good at memorizing where they can find food and they will constantly search for new food sources. Mostly these food sources are flowering bushes, flowers, trees, and so on.

This, in turn, will make it so that the bumblebees return to their nest without any pollen attached to their bodies. But the queen needs the pollen to survive and to lay more eggs.

Instead, you should simply plant some flowers or a flowering bush that bumblebees like in your garden.

This will help them much more and it will also make your garden more beautiful. So it is a win-win for everyone.

What Can You Feed a Bumblebee?

If you find a lonely disoriented bumblebee on the ground then you can helo it by feeding it.

Bumblebees can be fed with sugar water or honey. It is also possible to gently remove some pollen from a nearby flower and put it next to the bumblebee. Bumblebees will eat nectar, pollen, honey, or sugar water.

It is very possible that you can find a lonely queen from last year that has not yet founded her own nest.

Freshly mated bumblebee queens will emerge after the winter in spring. They will often be found on the ground searching around for flowers.

You can help the queen by giving her pollen and honey. This will allow her to start laying eggs.