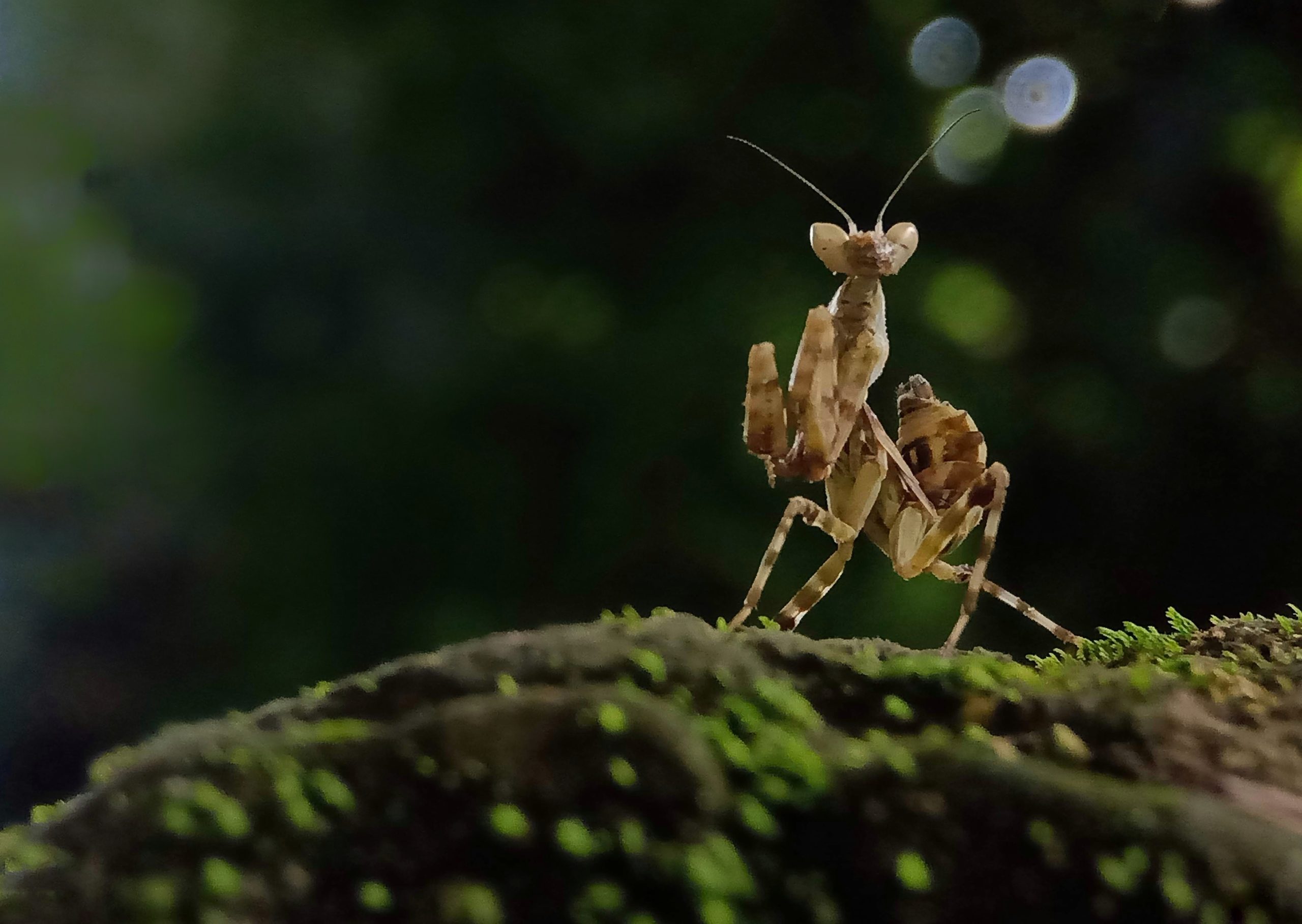 Keeping praying mantis as pets is a rather new phenomenon. Most of us have seen praying mantis in botanical gardens, zoos, or outdoors in nature. But more and more people have started to keep praying mantis as a pet at home. There are more than 2300 different praying mantis species out there. Most of the species live in tropical rainforests, but some have managed to establish their species throughout Northern America and Europe.

As a whole, the best praying mantis species to take care of, are regional ones. Depending on where you live, the Chinese Mantis, the European Mantis, the Carolina Mantis, or the Arizona Mantis, as well as the Ghost mantis make rather hardy pets that are easy to care for.

What Type of Praying Mantis Should I Get?

In some areas of the world, catching and keeping certain praying mantis is prohibited by law because some species are endangered.

Check out the local regulations on this topic, before you start looking for a pet praying mantis.

Praying mantis are solitary in nature, meaning that they live and hunt on their own. You don’t have to worry about getting a praying mantis family.

The easiest praying mantis species to keep are already living in your area. They are already used to the temperature, climate, humidity, and food in the region.

There are mantis, that mimics flowers and are especially spread in the tropical rain forests of East Asia. They belong to the family of the Hymenopus species.

Others mimic dead leaves (Genus: Deroplatys), and moss (Genus: Majangella) such as the Majangella Moultoni, commonly known as the Moss Mantis. Some mantis species have specialized for life in the desert (Eremiaphila Mantis) and are a small species that mainly stays on the ground and runs very fast.

There are so many different mantis species out there, and every species has adapted impressively to its environment. It is almost impossible to go through every species and its natural environment, but here is a small selection of praying mantises, that live in your area.

The most common praying mantis species in North America are the European Mantis, and the Chinese Mantis. These two species can be found in almost every state.

The Stagmomantis Carolina, often referred to as Carolina Mantis, can also be found in many parts of the US.

A very pretty species that goes under the common name of Arizona unicorn mantis (Pseudovates arizonae) can be found in (surprise!) Arizona. This species usually comes with cream and brown stripes and hides in trees and bushes, mimicking branches.

Another very cool species that lives in Arizona is the Mediterranean Mantis, or also Iris Mantis (Iris oratoria). The name comes from two big violets, blue and brown patterns on its wings that remind us of eyespots.

Florida is home to the Grizzled mantis (Gonatista grisea) which is truly a master of camouflage. It becomes completely invisible on the bark.

A praying mantis species that mainly lives on the ground is the Agile Ground Mantis (Litaneutria Minor). This species prefers to live in dry regions and can be found in many dry and warm regions in the west and south of the US.

There are many more species (around 17 in total) that you can find in the US in different states. The best way to look for praying mantis is to go into nature, maybe close to a river, and observe bushes, high plants, and trees.

If you want to import a praying mantis, that does not live in your area, it would be illegal unless you have a special permit from the USDA, the U.S. Department of Agriculture.

In Canada, only three praying mantis species are known at the moment. These are the Chinese Mantid (Tenodera aridifolia), the Agile Ground Mantid (Litaneutria minor), and the Praying Mantid (Mantis religiosa)

Fun fact: The Chinese Mantis is called “Japanische Riesenmantis” (= Japanese Giant Mantis) in German. Whoever did that translation apparently had no idea, that Japan and China are two different countries.

Throughout Europe, you can find the European Mantis (Mantis religiosa) in many countries.

The European Mantis can be found in many countries in Europe, especially in the warmer once such as Spain, Portugal, and Italy.

The Mantis religiosa can also be found throughout most continental European countries. Very rarely another praying mantis can be found in Europe, such as the Giant Asian Mantis (Indochina Mantis) in Italy.

Australia offers a wide variety of habitats to different insects and has both dry desert areas as well as rainforests.

That’s why around 160 different praying mantis species can be found in Australia. The majority of the species live in the rainforests of Australia, especially at the coast side in the East and South-East.

New Zealand is home to two species. One is native, the other one was imported. Guess which one is which: There are the New Zealand Praying Mantis (Orthodera novaezealandiae) and the South African Praying Mantis (Miomantis caffra).

Yes, you guessed right, the New Zealand Praying Mantis is the native one.

The New Zealand Praying Mantis is widely established, while the South African Praying mantis is not widely distributed, even though the population is steadily increasing.

You can find more than 200 praying mantis species in Africa.

A very popular pet mantis is native to Africa: The Ghost mantis. It looks and behaves like a dried, brown leaf, slowly moving in a light breeze.

In many parts of the world, you can buy Ghost Mantis online to keep as pets, because they are hardy, easy to keep, and have a cool appearance.

Out of the many other praying mantis species, that you can find in Africa, here is a small selection:

The African Praying Mantis is a name that refers to several species that are native in Africa such as the African twig Mantis, the African grass Mantis, and the African bark mantis. They all live about one year.

Another mantis genus, that primarily lives in Africa is the Genus Sphodromantis, commonly referred to as “Giant African Mantis”.

One very cool subspecies is the Blue Flash Giant African Mantis (Sphodromantis Species). It is mainly green but has blue spots on the forearms that can be seen when you look a the mantis from the front.

Some very pretty Sub-Saharan flower mantises also live in Africa. The Genus is Pseudocreobotra and looks similar to the Asian flower mantis species, but they belong to a different subfamily.

In the different countries of Asia, you can find some of the coolest mantis species.

Here is just a small selection of praying mantis species that can be found.

There are many praying mantis species, that mimic dead leaves. They belong to the Genus Deroplatys and many of them can be found all over Asia.

Mantis, that mimic moss belong to the Genus Majangella, such as the Moss Mantis (Majangella Moultoni) that can be found in Malaysia.

Many mantis species have specialized for life in the desert, such as the Desert Mantis (Eramiaphila Mantis) in India.

There is a group of mantis that belong to the Rhombodera species, which have very unique features. The Giant Shield Mantis (Rhombodera magaera) is a big, easy to care for, green mantis with a somewhat enlarged upper body that appears a bit like a shield, thus the name.

Other species that belong to the Rhombodera genus are Hooded Mantis and Leaf Mantis.

Yes, I know. Chances are very low, that you happen to live in a tropical rainforest. But just imagine for a second, that you do. Thousands of fascinating creatures live there, too.

One super rare, magnificent, I dare to say almost legendary mantis, that has only been seen by humans a few times is the Brazilian Dragon Mantis (Stenophylla Cornigera) which lives in the Brazilian Atlantic Rain Forest.

Some of the prettiest mantis species are the ones that mimic flowers and some in beautiful colors ranging from yellow to white and pink.

The Hymenopus species are one of the flower mantis species that spread in tropical rain forests of East Asia. Out of the Hymonepus family, the most popular one is probably the Orchid flower mantis (Hymenopus coronatus).

Another mantis that mimics flowers, is the Yellow orchid flower mantis (Helvia Cardinalis). This species lives in south-east Asia.

Another crazy-looking mantis species that live in the rainforest in the south and south-east Asia is the Wandering Violin Mantis (Gongylus gongylodes). This species looks like a stick with leaves on it.

The Glass Mantis (Sinomantis denticulata) is a tiny, also shine-through mantis that mainly occurs in the tropical areas of China.

The Ghost mantis (Phyllocrania paradoxa) is very hardy and easy to care for. Therefore it makes a great pet praying mantis. It looks and behaves like a dried, brown leaf, slowly moving in a light breeze. It is a small mantis of around 1.8-2 inches of size with a lifespan of 4 – 8 months. In comparison to other praying mantis species, such as the Chinese Mantis or the African Mantis, it is a bit harder to keep, because it needs a lot of humidity.

As a whole, ghost mantis is a good pet, easy to handle, and easy to keep. But it is not the easiest mantis to keep, as it requires high humidity and higher temperature than other mantis species that are easier to keep.

Most praying mantis species have to be held alone in a tank, but this species can actually be kept as a group and they won’t cannibalize each other as long as they are fed regularly.

They do need a higher temperature than many other species, so depending on where you live, you might want to adjust the tank you keep them in.

Can You Keep a Chinese Mantis as a Pet?

Chinese mantis are one of the biggest praying mantis species with rather long lifespans of up to 12 months. They make great pets due to their wide availability, size, and low maintenance. They are peaceful towards humans, easy to care for, and only need small tanks to live in.

So, YES you can keep a Chinese Mantis as a pet. It is a great, educational, and even low-cost pet that does not need a lot of maintenance.

Are Praying Mantises Easy to Care for?

There are so many different praying mantis species, that it is almost impossible to give a general answer to that question. Praying mantis are peaceful towards humans, are not poisonous, and are definitively educational and fun pets to own. But every species comes with different requirements.

As a whole, a regional praying mantis is easy to care for and makes a great pet. If you choose to acquire a non-native or even tropical species, they might come with some more requirements concerning temperature, humidity, and diet.

We have a full guide on how to take care of a mantis that you can read right here if you want to know more.

What is the Coolest Praying Mantis?

Out of the many different mantis species, the most impressive ones are probably the mantises, that mimic flowers.

And than there is of course one of the rarest praying mantis species that was discovered so far: The Brazilian Dragon Mantis (Stenophylla Cornigera).

What is the Smallest Praying Mantis?

Every praying mantis is tiny when it hatches. But the smallest species after the last molt is only 0,4 inches big once it is fully grown. It’s the Bolbe pygmaea which is endemic to Australia. The colors range from dark brown to green.