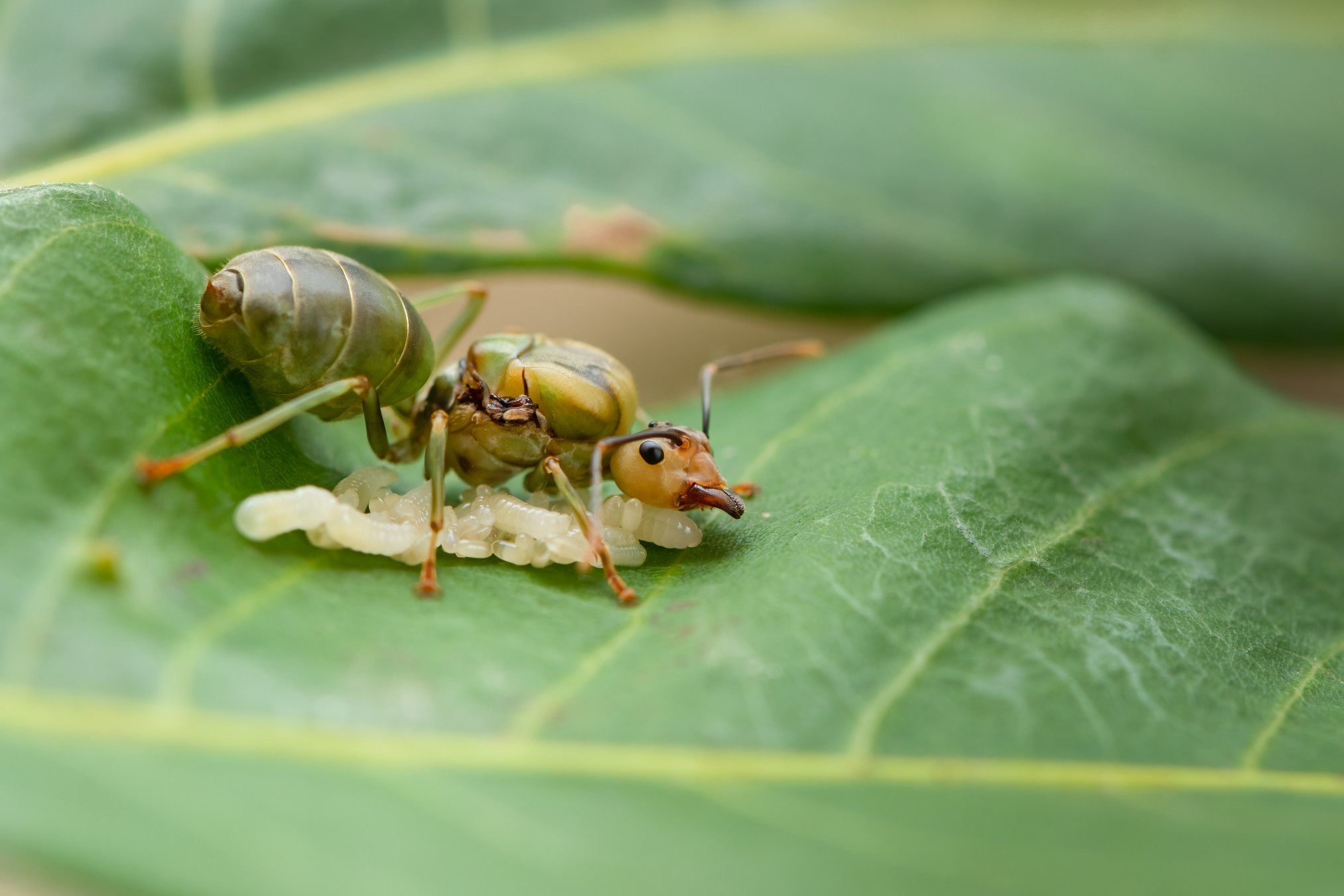 It is time to start your own ant colony. You are ready to catch your first queen and make the first step in your new ant-keeping hobby. Catching queen ants can be an exciting, nerve-racking, or even disappointing experience. You have to be patient and observant when you are on the “hunt”. It might feel a bit like a treasure hunt, being outside, watching the ground, and turning around rocks and branches. But if you follow a few simple rules and be patient, a beautiful first queen ant will soon be yours.

As a whole, you can either look for queens in an already established ant colony and dig her out or search for a freshly mated queen after her nuptial flight. In that case, you can take a walk on a warm and sunny day in spring or summer after a rainstorm and search for a queen crawling on the ground.

In the following sections, I will elaborate on how you can find or dig up a queen in more detail.

How to Catch a Queen Ant

Before you get your containers and test tubes ready, you should ask yourself if you need a queen.

A queen ant can up to almost 30 years, depending on the species, and will continuously produce eggs. She will be the center of your ant colony, responsible for the growth of the nest.

With a queen ant comes responsibility, just like for any other pet you might own. Catching a queen leads to a long-term commitment.

It will also take some time until you can see worker ants crawling around. For some species, it takes up to one or even two years before you can move them into a formicarium.

If you want quicker results and you are looking for some ants for your ant farm in order to learn a bit about their behavior and to study their life, you might be better off with only worker ants.

Ants can live without a queen and will build tunnels, and collect and disassemble food. They can live between a few weeks and some months.

But if you want to start your own pet-ant colony from scratch, you will need a queen ant. And this is how you can get one:

What is the Easiest Way to Get a Queen Ant?

Before you go outside to look for queens, be sure to be equipped. You will be disappointed if you find some beautiful queens, but have nowhere to put them in order to bring them home safely.

You will need test tubes and cotton to close them or snap cap vials. If the vials close air-tight you might want to punch a tiny hole in the lid so that the queen can breathe.

You should also already prepare some test tubes at home. This is where the queen will incubate over the next few months.

Now, what is the best time to find a queen? Most ant species prefer a warm and sunny day in spring or summer to send out their queens to mate. Wait for a rainstorm and look for queens on the next day.

A rainstorm leads to humid soil which is perfect for the queens. They are planning to dig into tree trunks and the ground after they are mated.

A light breeze will help them fly. So these are the perfect conditions: Warm, sunny, humid, light breeze, and a day after a rainstorm.

The so-called nuptial flights, in which the male drones and winged queens fly around to mate happen all day (and even night) long.

Don’t worry too much about the exact time, just go outside during the day and try your luck.

What is a Nuptial Flight

The nuptial flight is the time in which an ant colony sends out their winged male ants and winged virgin queen ants to fly away, mate in the air, and build their own colonies. Every ant species has its own timing for its nuptial flight.

When a queen has successfully mated, she will land on the ground, in many cases throw their wings off and start looking for a nice place for her new colony. This is the perfect time to catch her!

Ways to Catch a Queen

There are two ways to catch a queen.

The first is to catch her after her nuptial flight before she started her own colony.

The second way is to catch her out of an already existing colony. This method requires more than just a test tube to catch a queen because you will try to dig out as many ants as possible.

Before you catch a queen, make sure to check the laws on collecting insects in the area.

Many regions have certain rules when it comes to collecting and keeping ants and you don’t want to break any laws.

If you go on a queen hunt on public ground, get permission first.

Catch a Queen After Her Nuptial Flight

Now let us start with the first possibility: Catch a queen after her nuptial flight.

The queen is successfully inseminated and is now crawling around on the ground to find the perfect and safe stop for her new colony.

Equip yourself with test tubes and containers, one for each queen you find, and go for the hunt.

You can start looking in your own backyard or in the neighborhood. Take a walk to parks, or playgrounds.

Look under rocks and in and around rotten trees. The most important thing is to keep your eyes open and to the ground when searching for queens.

Some might still have their wings on. This is not necessarily a bad sign. Some queens throw their wings off quickly after they mated and landed, but some will keep them on for quite a while.

Just look for any kind of movement on the ground and be patient. Queen ants are not sitting on the ground, waiting for you to catch them.

But get too frustrated if you can’t find a queen right away. Ants are everywhere and if you are patient enough, you will find a queen for sure.

If you find a queen, gently put her in your transport container and make sure not to hurt her.

Only put one queen in one container.

It happens that queens fight or even kill each other and you don’t want to take that risk.

Do not stop collecting when you caught one queen. The more queen ants you catch, the higher the chances that at least one will successfully build a colony.

Catch a Queen Out of an Existing Colony

You can try to catch an entire colony including a single ant or go for an ant species with several ants and just try to catch as many ants as possible to increase the chances to catch at least one queen.

An example of ant species with multiple queens is, for example, the Myrmica Rubra, also known as European fire ants.

The queens of this species tend to build their colonies together after their nuptial flights.

If you go for the Myrmica Rubra, you can look for a nest and dig them out. Collect as many ants as possible.

The chances are very high, that you catch at least one queen ant. But beware, the European fire ant got its name for a reason.

Their stings are very painful and similar to the fire ants from the Solenopsis family. You should definitely wear gloves and rubber boots since these ants are highly aggressive and their attacks are very painful.

You can also try to dig out an entire colony.

Prepare yourself with some buckets and a shovel. If you want to make sure that no ants escape from the bucket, you can put baby powder on top of the bucket and the ants won’t be able to climb out.

You should wear gloves, rubber boots, and prober pants that won’t allow ants to crawl on your legs.

The queen of a colony is somewhere in the center and very well hidden and protected. Try to dig gently and don’t destroy too many tunnels or you might squish the queen.

Put shovel per shovel in the buckets and close the buckets with a lid. Otherwise, your queen might escape. When the entire ant nest is in the buckets you can start digging gently through the colony.

You should do this outside due to obvious reasons. Try to follow the tunnels with a spoon or something similar until you find your queen.

But the short answer is: Not voluntarily. But in jeopardy, she might come out.

Every day you see ants crawling around, some are tiny, some are major workers, some are soldiers and some are queen ants. But how can you distinguish a queen from other ants?

As a whole, queen ants are generally larger than workers, they have wings or marks where the wings originally were. Queen ants have a bigger thorax which is often higher than the thorax of other ants due to their wing muscles. They also have a big abdomen to be able to lay all the eggs.

As a whole, queens can be differentiated from make drones by their size, thorax (the middle part of the ant’s body), and abdomen. The abdomen is bigger than that of male drones. The queen is also overall bigger and has visible wing scars on her thorax where the wings broke off.

The most noticeable difference between the queen and her workers is the size. Queen ants are much bigger than most of her female worker ants and also bigger than the male drones.

In some cases, ant species have major worker ants that have similar sizes as the queen. If you are not sure, whether the ant you found is a major worker ant or a queen ant, you can have a closer look at her thorax.

The middle part of the ant is called the thorax. This is the part, where the wings grew.

This part is often raised and shaped like a plateau or dome. Many queen ants throw their wings off, once they are mated because they don’t need them anymore.

You can either find queen ants with their wings still on or, if you look close enough, with marks where the wings once were.

Male drones also have wings, but they never throw them off and male ants die right after their nuptial flight.

They are also a lot smaller and thinner than queen ants and have tiny heads.

If you see an ant with wing marks on her thorax, you can be sure that this is a queen.

If you are still not sure, if you caught a queen or a worker ant, you can have a look at her abdomen.

Compare it with other ants from the same species. The abdomen of a queen ant is way bigger than of a normal worker.

This abdomen will lay all the eggs and needs to be that big.

Can a Queen Ant Fly

A queen ant can fly right after she leaves her colony for the first time. She will take off for her nuptial flight in which she mates with a male drone. After she is successfully inseminated, she will hit the ground and never fly again, even if she keeps her wings on.