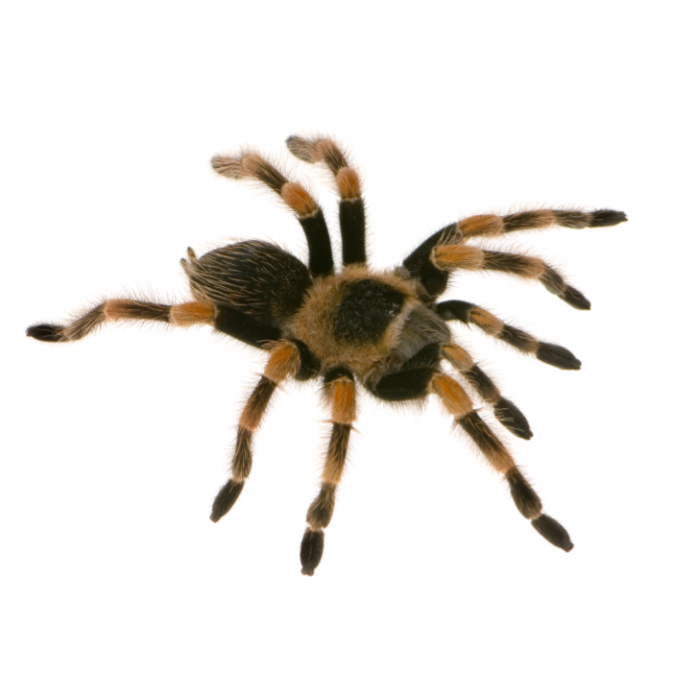 Mexican Red Knee tarantulas are one of the most held pet tarantulas and for good reason. They are generally very docile and interesting to keep as pets while being relatively low maintenance. But there are a lot of things that are important to get right to ensure that you have a happy tarantula.

In this article, I will tell you exactly what to look out for and how to properly care for a pet Mexican Red Knee tarantula.

I already wrote a whole article about if tarantulas are good for beginners and generally the same things apply to Mexican Red Knee tarantulas.

As a whole, Mexican Red Knee tarantulas are good pets for beginners because they are relatively easy to care for and they don´t require much attention after they got used to their new home. But they are not pets that like being held, cuddled, or taken for a walk.

So if you want to get a Mexican Red Knee tarantula then you have to know that they don´t care for company and they will have no interest in connecting with you.

They are spiders, who usually hunt and live in solidarity unless they want to mate. If you want to have a deep connection with your pet then you have to get a different pet. A dog, a rabbit, or even a parrot will be more suitable for you.

But if you want something that is interesting to look at and to observe then a tarantula might be the right match for you.

How Big do Mexican Red Knee Tarantulas Get?

Tarantulas are among the biggest spider species on the planet so you should know how big your new darling can get so that you can buy a cage that is big enough for your Mexican Red Knee pet tarantula.

Males and females tend to be of a similar size although some older females can be slightly bigger as they tend to live much longer than male Mexican Red Knee tarantulas.

What do Mexican Red Knee Tarantulas Need in Their Cage

This is, believe it or not, one of the most important things to get right! The cage of a Mexican Red Knee tarantula needs to be big enough and contain enough hiding spots for it to be happy.

You will be surprised how big the cage of a tarantula has to be so that it is happy and stays healthy.

It is always better to get a slightly bigger tank just to make sure that the tarantula has enough room to grow and happily live in.

The substrate is also very important. Give your Mexican Red Knee tarantula the wrong substrate and it might hurt itself.

The best substrate for a Mexican Red Knee tarantula is a mulch-type substrate like coconut fiber or reptile substrate. Some pet stores also sell bark substrate which can also be used. The cage should be filled with a 1-inch thick layer of substrate or more.

You need a type of substrate that can soak up some water to ensure a good humidity level and, most important, supply a soft underground for the spider to walk on.

Never use gravel or sand as a top layer substrate as the tarantula won´t like it and could even hurt itself by constantly walking on the rough surface.

Your tarantula needs decoration. But not the kind of decoration we humans need.

Decorate the cage of a Mexican Red Knee tarantula with half logs, bark, plants, stones, branches, and more. Anything that can give the tarantula a way to hide under or behind. A shallow water bowl is also good to supply the spider with a constant water source.

When decorating the cage of your tarantula make sure that you give it ample opportunities to hide while also making sure that it has at least one open area where you can feed it and place a bowl of water.

You can buy decorations for the tarantula cage at your local pet store but you can also simply collect branches, stones, and bark outside. Just make sure to wash them off with hot water and leave them in an open area inside to dry.

Then make sure that nothing is living inside your collected decoration before putting it in the cage.

This is a hotly debated topic in the tarantula-keeping community and I actually wrote a whole separate article about misting tarantulas. In that article, I explain why it is a bad idea to mist a tarantulas cage and why humidity isn´t as important as you might think.

As a whole, a Mexican Red Knee tarantula likes humidity levels of 60 – 70 %. But if a constant supply of water is present in a tarantulas cage, like a bowl of water, then it is usually not necessary to mist the cage.

I know a lot of new tarantula keepers who obsess over the humidity levels in their tarantula cage. You don´t need to always have a humidity level of between 60 and 70 percent.

So desperately raising the humidity levels to the recommended numbers during the day is actually counterproductive and your tarantula won´t like that.

It is best to keep a shallow bowl of water in the tarantula cage and if that isn´t enough then add water directly to the substrate once a week to raise the humidity levels in a healthy way.

Misting is not the way to go here. You can read more about misting tarantulas and why watering the substrate directly is better right here.

Do you need a heat lamp or UV light for your tarantula? After all, they live in pretty warm areas and maybe they need UV light just like we humans do.

As a whole, Mexican Red Knee tarantulas don´t need a heat lamp or light above their cage. It is much better to install a heating pad under the cage to get the temperature to the point that tarantulas like.

I never recommend using a lamp or lights for a tarantula cage unless it is located in a spot where no natural light shines and even then it is usually enough to turn on an external light source instead of installing one over the cage.

The Mexican Red Knee tarantula is endemic to the southern United States and Mexico, meaning they naturally live there.

This means that you usually don´t need any heating for your Mexican Red Knee tarantula because it´s basically room temperature in most western homes.

And even if the temperature is slightly higher then your tarantula will still be fine as long as it has sufficient access to water.

The next thing we have to cover is obviously feeding the tarantula. Luckily they are easily fed as they hunt their prey on their own.

All you have to do is throw something to hunt in their cage.

As a whole, Mexican Red Knee tarantulas eat insects like crickets, roaches, mealworms, and small baby tarantulas eat flies and small crickets. Tarantulas will hunt their prey on their own so just throw a cricket in the cage and watch the spider hunt.

You can buy crickets and mealworms of all sizes in your local pet store. A Mexican Red Knee tarantula can eat anything that is as big or smaller than its abdomen.

So as the spider grows you should also feed it bigger prey.

When the tarantula is still small then they will eat more than an adult tarantula because they are still growing.

How Often to Feed a Mexican Red Knee Tarantula

This is an often asked question because unlike a dog or a cat the tarantula won´t exactly tell you that it is hungry. At least not in a way that we humans easily understand.

As a whole, Mexican Red Knee Tarantulas should be fed about once a week. Young tarantulas will need more food as they still grow so feed them twice or three times a week. If a tarantula gets uneasy and constantly runs around after it was calm the last few days then this might be a sign that the spider is hungry.

You will see if a tarantula is getting too much or not enough food by looking at its abdomen and observing its behavior.

If the abdomen of the spider is getting significantly thinner after a while then you are feeding your spider too little food. On top of that if the tarantula is overly active and constantly searching its cage then that is also a sign that it is hungry and needs more food.

On the other hand, if the tarantula’s abdomen is getting really big and it tends to be very calm even when you throw a new insect in its cage then you might be feeding your Mexican Red Knee too much.

Mexican Red Knee tarantulas drink water. Water can be supplied by placing a shallow bowl filled with water inside the cage. Every now and then rain can be simulated by misting the sides of the cage. The tarantula will drink the water drops.

Getting a Mexican Red Knee tarantula is a commitment for quite a long time and it is important that you know that before you decide to get a pet tarantula.

But they usually only need about a year or two to grow to about 70 % of their final size. They will molt much more often when they are still young and in much longer intervals after the first year.

Telling the sex of your Mexican Red Knee tarantula is quite difficult but not impossible.

As a whole, male adult tarantulas will have so-called tribal hooks on the underside of the second segment of their front feet while female tarantulas tend to be bigger in size. But it is very hard to identify the gender of a tarantula when it is still juvenile.

Your best bet is taking the skin of the tarantula after it is molted to a professional to take a look at it.

He will sometimes be able to tell you if it is a male or female by looking at the inside of the molt.

The process of shedding the “skin” of the tarantula is called molting. Whenever the spider is growing it will molt and shed its old “skin” so that it can continue to grow.

The whole molting process can take up to 10 hours. Here is a video of a Red Knee tarantula molting in time lapse.

Mexican Red Knee tarantulas molt every 2 weeks for the first 4 months of their life after that they will grow slower and therefore molt less frequently. Tarantulas will stop molting when they are 4 to 7 years old and fully grown. Males will die shortly after their last molt while females will live for another 10 to 15 years.

When they start the process of molting they often lie sideways or on their back so that they can more easily get out of their old exoskeleton.

You will still be able to see some movement when the spider is molting. It will twitch its legs and contract its abdomen in order to shed its old exoskeleton.