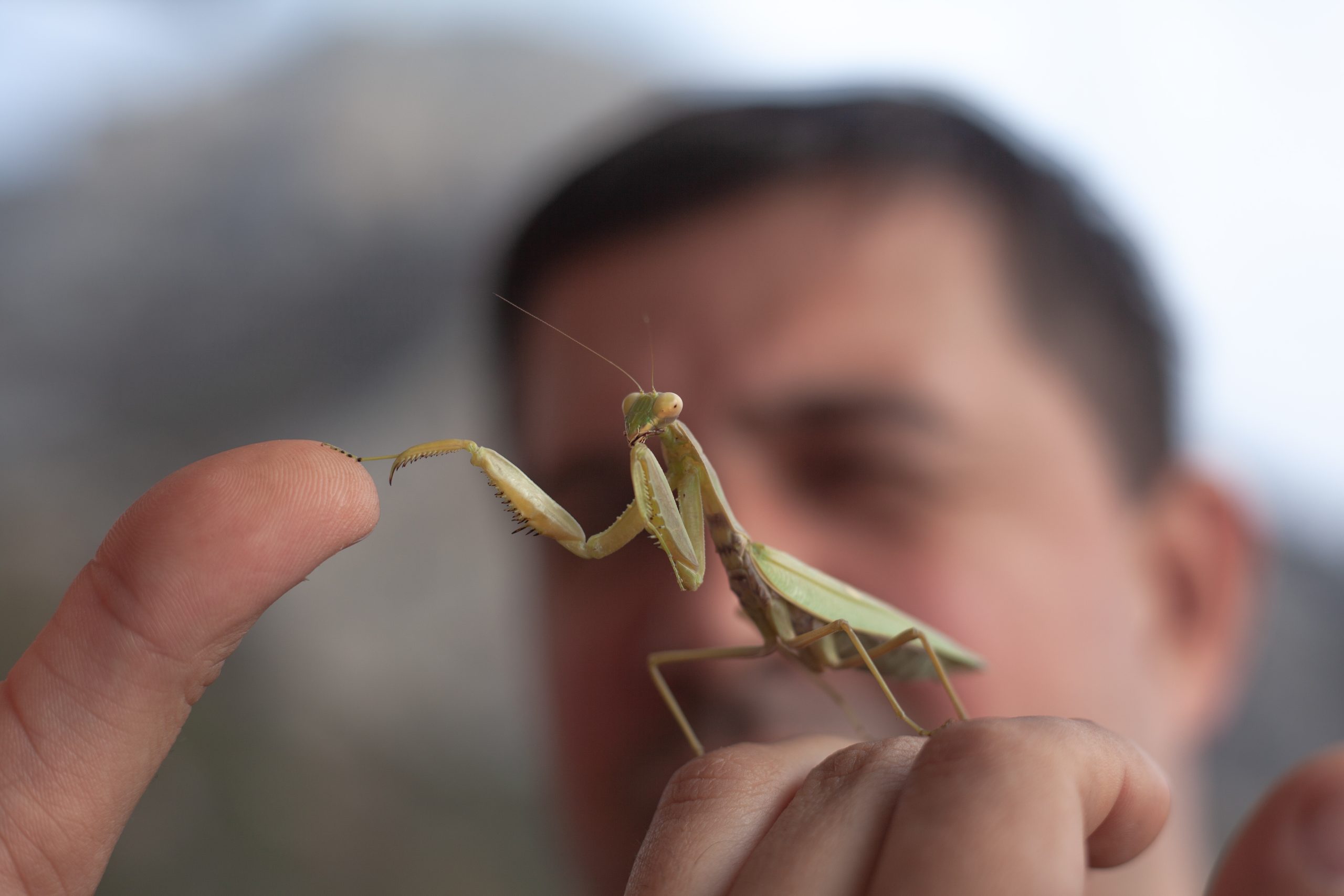 Praying mantis are magnificent creatures. They come in many different shapes, sizes, colors, and behaviors. They live all around the world and have adapted to every habitat they live in. Some mantis look like leaves, others camouflage between flowers, and some look like grass and are basically invisible to their prey. Depending on the species and their habitat the lifespans of the praying mantis can vary a lot.

As a whole, the lifespan of a praying mantis highly depends on the species and their habitat. Some praying mantis species only live for several weeks, while others can live up to 18 months.

The Lifespan of a Praying mantis

A praying mantis goes through various molts throughout its lifetime. In general, male praying mantises have a shorter life than females.

This makes sense because after the males were able to mate with a female, they are basically not needed anymore, while the female still has to develop and lay the eggs.

Every praying mantis goes through several molts. Male mantis molt 7 times, while female mantis molt 8 to 9 times. When a baby mantis hatches, they are called “L1” or “First instar”. After the first molt, they are referred to as “L2” or “Second Instar” and so on. Most insect species are categorized in these development stages.

The time periods between these molts differ from species to species.

The praying mantis species include more than 2000 different species, that are categorized in several families. Some of these families are:

Each one of these families includes many different subspecies that again come in different sizes, shapes, and habitats.

We also have a full list of mantis species for beginners that you can see right here.

Here is a selection of some of the more common and popular praying mantises including their lifespans.

If you want to know how long a mantis lives and what kind of changes it goes through during its life cycle then consider reading our article about the lifespan of a praying mantis right here.

The African Praying Mantis is the name for several subspecies and includes several species that live in Africa such as the African Twig Mantis, the African Grass Mantis, and the African Bark Mantis. They grow up to between 2,5 and 3 inches and their lifespan is about one year.

The Giant Shield Mantis is one of the biggest praying mantis species and can grow up to 3-5 inches in size. The males of this species can live between 6 to 12 months, while the females live up to 18 months, which is a very long lifespan for a Praying Mantis.

The beautiful Orchid Flower Mantis comes in white and pink color shadings, sometimes with some green highlights. They are probably among the prettiest praying mantis.

They camouflage on orchids and can match their color to their surroundings. The female orchid flower mantis can grow up to 2,5 inches long and can live up to 8 months.

The male on the other hand only grows up to about one inch and has an average lifespan of 5 to 6 months.

The Spiny Flower Mantis is sometimes referred to as “Number 9” due to its remarkable pattern on the wings that look a bit like the number 9.

They are beautiful creatures that usually live in sub-Saharan Africa. The males grow up to 1.5 inches and the females can grow up to 1.75 inches. Their lifespan can be between 10-14 months.

As for all praying mantis species, females tend to live longer than males.

There are so many praying mantis species out there, and only little is known about these fantastic creatures.

The majority of praying mantis species live in tropical rain forests, which makes it hard to find them and do research about them.

What is the Longest Living Praying Mantis?

The longest living praying mantis is the Giant Asian Mantis, which makes a popular and common pet when it comes to keeping insects. The Giant Asian Mantis can grow up to 3,5 inches in lengths (females) or around 3 inches for males. In captivity, they can live up to one year, in some very rare cases even up to 18 months.

Praying mantis will generally live quite a bit longer in captivity than in nature as is the case with most animals and insects.

How Long do Praying Mantis Live as Pets

Praying mantis tend to live longer when they are kept as pets, as they can avoid and predators. Of course, it is essential to care for the praying mantis and offer the same conditions as they would have in nature, to keep a praying mantis alive for as long as possible.

If you want to make sure that your mantis lives healthy then consider reading our article about caring for praying mantis right here.

Some praying mantis species in captivity are known for living up to 2 years, which is a really long lifespan for a praying mantis.

However, keep in mind, that praying mantis are still insects, that can easily die for literally no reason.

Do not blame yourself, if your pet praying mantis died after a few months. It would probably not have lasted that long in nature.

Can I Keep a Wild Praying Mantis as a Pet?

Praying mantis make wonderful, educational pets. Depending on where you live, you can even catch a praying mantis by yourself.

Wild praying mantis can be kept as a pet but it is important to check the local regulation for keeping non-endemic (animals that are not naturally living in your country) insects as pets. But keeping a wild mantis as a pet is usually possible and very educational for the pet owner.

Praying mantis are hardy, easy-to-handle creatures, that are not very demanding. They don’t need a lot of space and are absolutely non-aggressive towards humans.