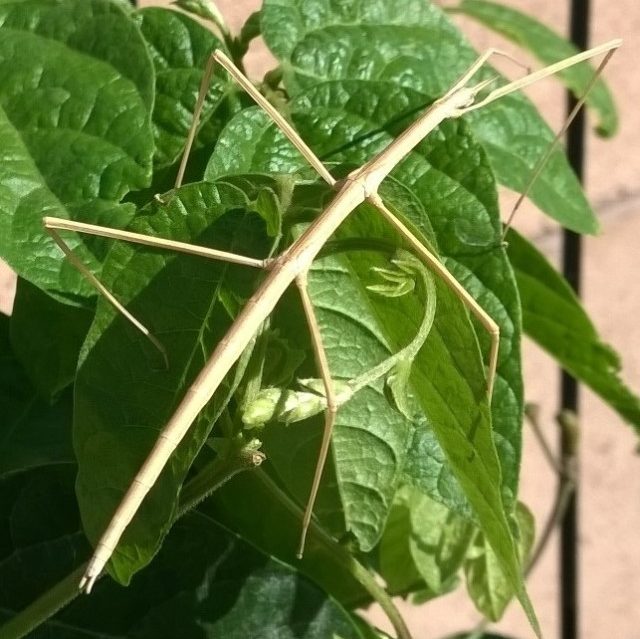 Stick insects are amongst the most popular pet insects. Many species are easy to handle, easy to care for, they don’t need much space, are non-aggressive, calm, even docile, and make great pets even for children. Out of over 3,000 different stick insect species, around 300 species are being kept by individuals as pets.

As a whole, the lifespan of a walking stick is highly dependent on the species. Many species that are kept as pets have a lifespan of around 9 to 12 months. Males have a shorter life expectancy than females. Many species reach maturity after 3 to 5 months. That’s when they can start to reproduce.

The lifespan of walking sticks can be longer for stick insects in captivity. There is not a lot of scientific data on the lifespan of Phasmids in the wild, because these insects are masters of camouflage and it is hard to explore something, that you cannot see.

In the following, you will find out about the typical life cycle of a walking stick and the lifespans of the most popular stick insects.

What Does the Life Cycle of a Walking Stick Look Like?

It All Starts With an Egg

The life of a Phasmid starts with an egg. The eggs of walking sticks are called “ova”. Stick insects have several ways of laying their ova. Some females simply drop the ova to the ground, others stick them to leaves, some bury them in the soil, and some fling them out of their abdomen and catapult them away.

Depending on the species, the ova need different criteria to develop. The temperature and humidity have to be right.

There are some species, that have found a very impressive way to provide the perfect conditions for their ova, such as the Extatosoma Tiaratum. This species is also known as the Australian Walking Stick or Giant Prickly Stick Insect. The females drop the ova to the ground.

This ova looks exactly like seeds and attracts ants to carry them into their underground ant home. The cap of the ova is tasty for ants and contains nutritions for them.

After the tasty part of the ova is gone, the ants carry the remaining ova onto their garbage pile in one of their chambers, which is also underground.

This underground chamber has the exact temperature and humidity level for the ova to incubate properly.

Not only are the conditions perfect, but the ova is also well protected from predators and any parasites. It’s the perfect place for the ova to stay until it is ready to hatch.

After several months, a nymph of the Extatosoma Tiaratum hatches, looking exactly like a red-headed spider ant and also moves exactly like one.

The ants in the anthill will not stop the walking stick in disguise to leave the nest and make its way up into the trees.

Only a few days later, this disguise fades away and the Australian Walking Stick will look more and more like a stick insect. By then it will already to somewhere between twigs and leaves and well hidden from any potential predators.

Every species has a different incubation time for their ova. It can be anything between 1 and 12 months. In some rare cases, the incubation period can be up to 2 years!

The Life as a Nymph

Once the nymphs have hatched, they will try to find a place to hide. Phasmids are the masters of camouflage. They mimic twigs, leaves, and grass, and are hardly recognizable in a tree or bush.

During their lives, walking sticks will molt several times. They can only grow by molting because their exoskeleton does not grow with them. When they molt, they hang upside down and slowly crawl out of their old skin. During this process, walking sticks are very vulnerable.

If the stick insect gets stuck in the old exoskeleton during the molt, it could die. Stick insects molt between 4 and 8 times in total.

After the final molt stick insects reach maturity. That means that they are now able to reproduce. Some species have wings after their last molt, but that does not necessarily mean, that they can fly.

Some wings are just meant for gliding or to confuse predators.

How do Walking Sticks Reproduce?

Sexual reproduction involves both males and females. Males will climb on the back of the females and try to inseminate the eggs that the female produced in her abdomen.

The walking stick males are in a better position than the males of praying mantises. Walking sticks only eat plants and will not attack each other or eat each other. The mating process of praying mantises on the other hand is a very risky one- at least for the males. If the female is hungry, or the male seems unworthy, she will rather eat the male before, or even during, or after the mating process.

But let’s not get too off-topic. After the female walking stick is inseminated, the males have done their duty and will die. The females will start to lay, fling, glue, or bury their ova, and the process starts again… with an egg. The ova will develop into both males and females.

Parthenogenetic reproduction does only involve females. Some species tend to reproduce parthenogenetically if no male is around in captivity, but will reproduce sexually in the wild.

Females do not need a male to produce ova that develops into nymphs. Once the females reach adulthood, they will lay the ova, and after some time of incubation, only female nymphs will hatch out of the unfertilized eggs. Not all walking stick species are able to reproduce parthenogenetically. For some species, only females are known so far and it is unsure if males even exist.

The Lifespan of the Most Popular Beginner Pet Walking Sticks

In general, females live longer than males. This makes total sense because, after mating, the duty of the males is fulfilled, while the females still have to lay the eggs and ensure the survival of the species.

These are the most popular pet walking sticks and their expected lifespans. The lifespans in captivity are longer than in the wild due to the perfect conditions pet owners can offer their stick insects and the lack of predators.

There is not a lot of data on the lifespan of walking sticks in nature due to obvious reasons: These tiny creatures are almost invisible because of their amazing camouflage.

The Indian Stick Insect needs around 4 to 5 months to reach maturity. The total lifespan is around 10 – 12 months. In some cases, the females can live longer.

The incubation period of the ova is 2 to 3 months. This species is particularly easy to breed.

The Annam Stick Insect molts 3 to 5 months until it reaches adulthood. The total life expectancy is around one year. Females can sometimes live up to 18 months.

The incubation time can vary between 3 to 6 months. This species is very prolific.

The Ramulus Artemis reaches adulthood after 3 to 4 months and has a total lifespan of 9 to 12 months.

The incubation time for this species is only 1 to 2 months.

The Ramulus Thaii has a total life expectancy of 12 to 15 months and an incubation time of only 1 to 2 months.

The male Thorny Stick Insect has a lifespan of approximately 8 months, while the females usually live around one year.

The incubation time is 3 to 4 months.

The Australian Stick Insect or Giant Prickly Stick insect reaches maturity after 6 months. The total life expectancy of the females is around 12 to 18 months, while the males die shortly after reaching maturity. The lifespan of the males is between 6 and 9 months.

The incubation period is between 5 and 6 months, but in some rare cases, it can take up to 2 years for an ova to hatch.

The Pink Winged Stick Insect is able to reproduce after 3 to 4 months. The total lifespan is around 12 months and the incubation period of the ova is around 3 months.

Zompro’s Stick Insect reaches adulthood after 3 to 6 months. The total lifespan is around one year.

The incubation period is usually between 3 and 4 months.

The Jungle Nymph needs 12 months to reach maturity. Females can have a lifespan of up to 2 years in total.

The incubation time of this species is rather long with 7 to 12 months.

The Dares Validispinus reaches maturity after 6 to 9 months and has a total lifespan of around 12 months. In some cases, females can have a lifespan of up to 2 years.

The incubation time is 3 to 6 months.

The Phaenopharos khaoyaiensis reaches maturity after 5 to 6 months and has a total lifespan of 12 to 16 months.

The incubation period is 4 to 6 months.

The Clonaria Conformans have a rather short life of 5 to 6 months for males and 6 to 7 months for females. They reach adulthood after approximately 2 months.