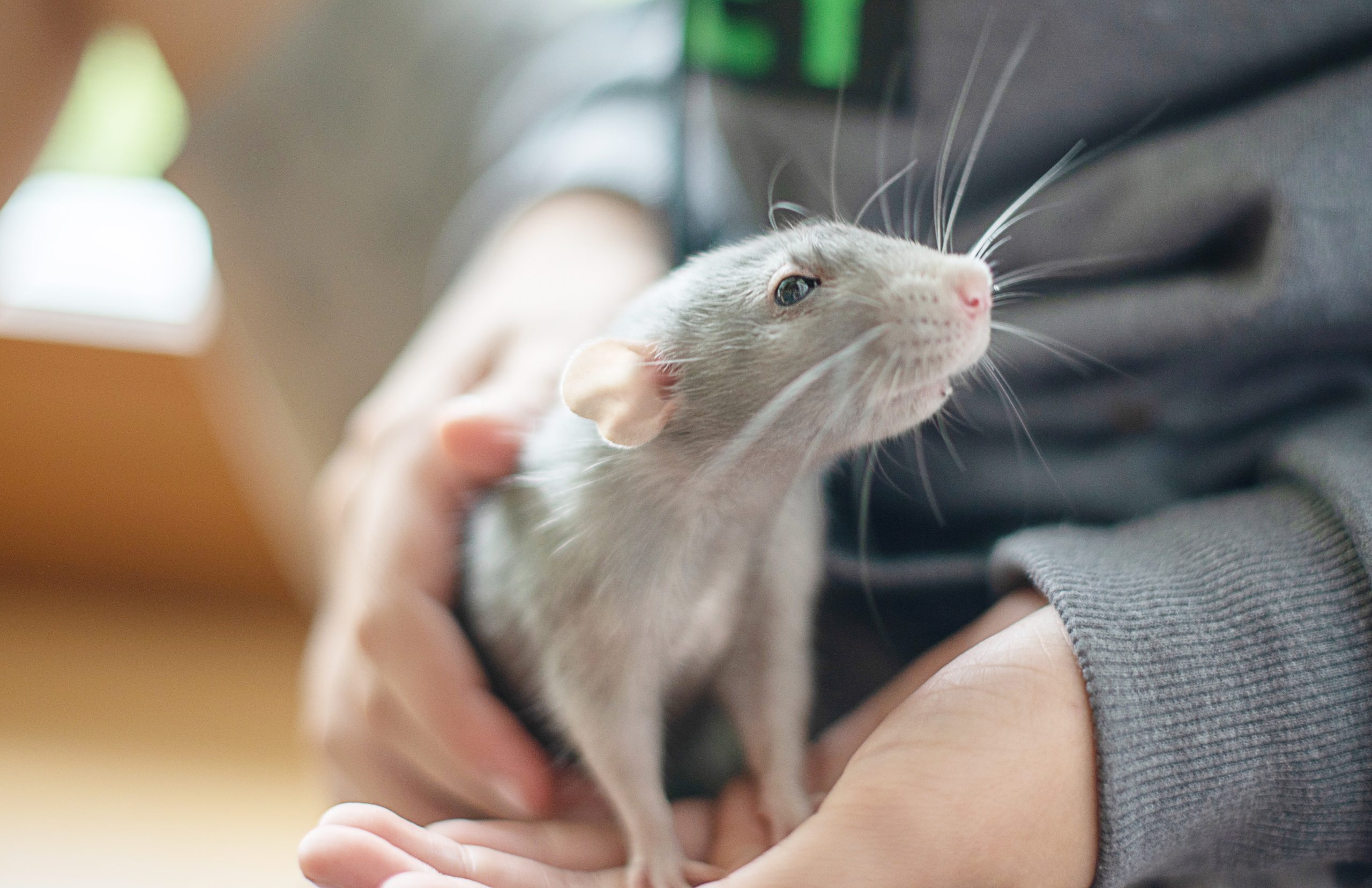 As a rat owner, you might have noticed the cute little noises your rats make when they play and cuddle each other, and when you spend time with them. They lick your fingers, sniff into your ear, and grind their teeth. Sometimes you might hear them squeak in the cage and sometimes you don’t hear anything but it seems like your rats are talking to each other.

As a whole, rats use a wide range of different signals to communicate. They use different kinds of sounds, such as hissing and squeaking, but also ultrasonic noises that we cannot hear. They also use physical signals and scents to communicate with each other and with us.

Rats are very social and communicative pets. If you know them well, you will be able to tell if they are happy, relaxed, nervous, or angry. In the following, you will learn everything you need to know about the communication of rats and how to understand their current mood.

Do Rats Speak to Each Other?

Rats have different ways to communicate with each other and not all of them are audible or visible to us.

As a whole, rats do speak to each other, using many different acoustic, olfactoric, and physical signals. They are social animals that will also start to speak to their owners.

In addition to the sounds that we are able to hear such as grinding the teeth, sniffing, squeaking, and hissing, they use ultrasonic sounds to communicate with each other. Ultrasonic sounds are not in our range of hearing, but the rats (and by the way also bats, dolphins, praying mantis, and some other animals) can hear these sounds.

Baby rats call after their mother with ultrasonic sounds.

They also communicate through physical signals such as grooming each other’s heads and necks. Sometimes they groom each other’s belly or flank to show dominance. This behavior will be tolerated but often comes with protest and squeaking, but no rat will be injured during this procedure.

When rats fight, they whistle, grind their teeth, squeak, and scream. When a rat is defeated in a fight, it will scream as a sign of surrender.

Rats like to wrestle. When they wrestle, it is usually just a game, even though it is also important for the ranking within the group. They nudge and knock over, and sometimes they start to squeak or scream a little if the game gets more serious. But in most cases, the weaker rat will throw itself on the back, and after the ranking was set, the rats will groom each other and stop wrestling.

Another very important part of communication is smell. They communicate through pheromones and mark their territories with pee.

Rats have extremely sensitive noses and can smell a lot more than we can.

Yes, rats can make various sounds, including ultrasonic sounds that we cannot hear.

They have a wide range of noises for every situation, feeling, or mood. If you watch your rat and listing carefully, you will understand what your rat is telling you.

If your rat is relaxed and happy, it is possible that you hear them bruxing. Bruxing means that your rat grinds the teeth. It seems a bit like a purring cat. It sometimes comes with a sound that reminds me of someone eating very noisily. Bruxing can be very soft and quiet, and also sometimes rather loud. A rat often makes this sound, when it is cuddling with the owner or with another rat. It means that the rat is super relaxed and very content with the situation.

Some rats make chirping noises during the grooming process. This is also a sign of contentment.

An angry rat should be left alone. If a rat makes angry noises with the mouth open, don’t try to touch it, because it will most likely bite you.

Hissing is an aggressive sound. It should not happen often, but in stressful situations, a rat might be hissing. If you hear your rats hissing, never put your hand in the cage without some kind of protection. You will probably be bitten.

Grinding teeth is usually a sound that a relaxed, happy rat would make. But sometimes during rat fights, you will be able to hear them grind their teeth to scare each other.

If you hear a rat scream, it can mean anger, fear, extreme disapproval, or pain.

When you hear a scream in the cage, you should check out the reason. Sometimes a rat is being bullied and screams for help or a younger or weaker rat lost a fight. In any case, it can mean that a rat was injured.

If a rat squeaks, it can mean that it is stressed or scared. A short squeak can also be a play sound.

A short squeak can also simply mean that you startled the rat. It’s a sound of surprise, but everything is alright.

But a long and loud squeak usually means fear, stress, or even pain.

When you hear a squeak because of pain, you will know that something is wrong. It can happen during a rat fight or if a rat catches the toe or tail on something.

Most of the time, a rat does not make any noises in the cage. If you observe constant noises, it’s time to see a vet.

Why Do Rats Squeak?

Rats can make squeaking noises for many reasons.

A short squeak can be a request to play, or a sound of surrender in a rat wrestle.

A long squeak could be an indicator of stress or fear.

A very high pitch, loud and long squeak can mean that your rat is hurt and in pain.

The meaning of a squeak highly depends on the situation. If you hear a rat squeak, you should check if everything is ok.