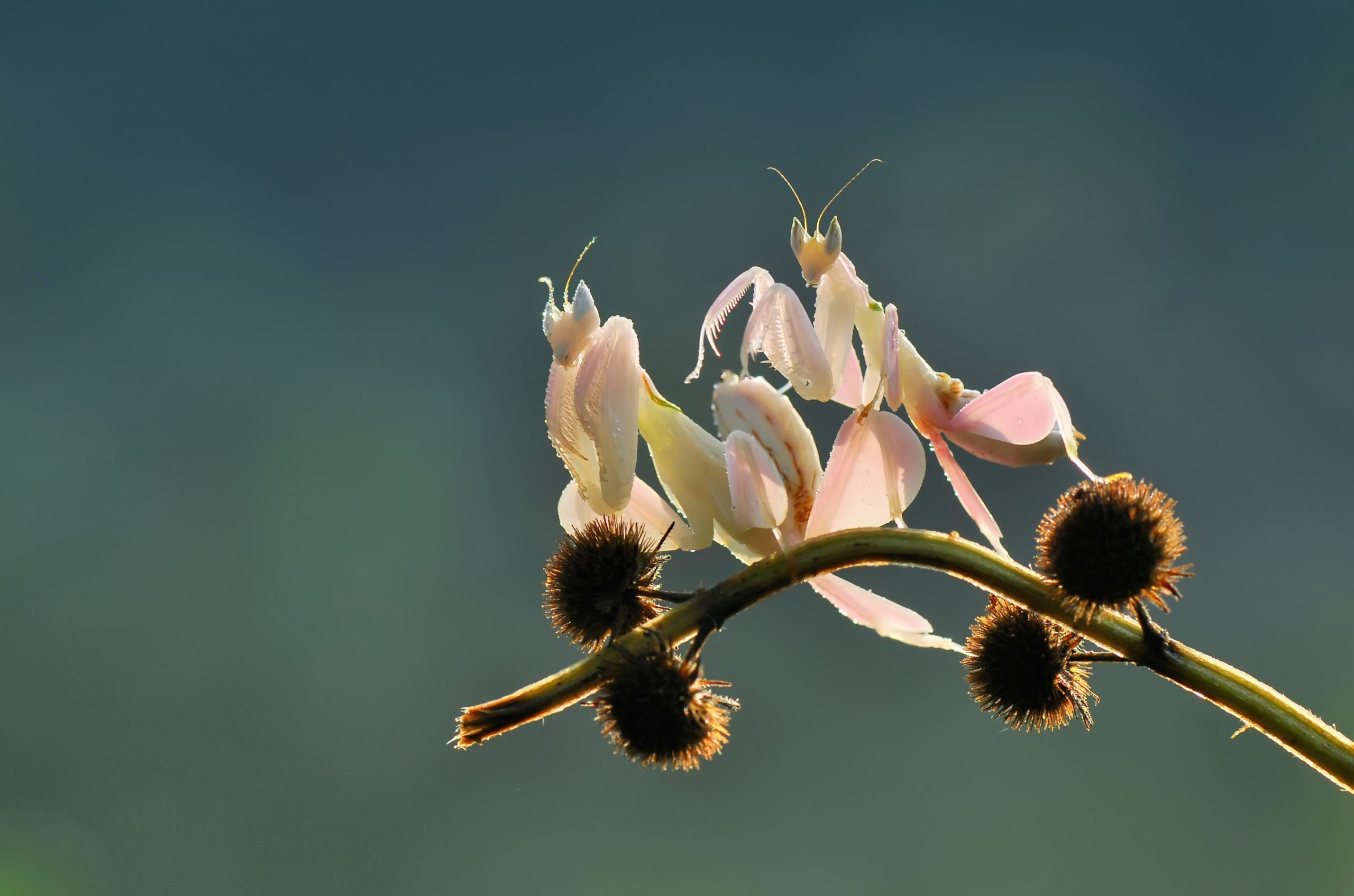 Praying mantis are lone fighters. They do not live in colonies or families, which makes sense, taking their cannibalistic features into account. It’s probably not the best start to a family get-together to admit that you ate all your siblings. Since praying mantis are always found alone, or in some cases during their mating process, you might be wondering if praying mantis have a way to communicate at all.

As a whole, praying mantis communicate via pheromones. They only communicate with each other during mating season. Females attract males for mating by releasing pheromones. Praying mantis have eyes and one ear, but these are not used for communication but only for hunting and for detecting threats in the wild.

Praying mantis are solitary insects, meaning that they do not live together with other mantises. Even in captivity, it is best to keep each praying mantis in an individual tank. Otherwise, chances are high that they kill each other.

There are very few exceptions to that rule. One of the exceptions is the Ghost Mantis. Several Ghost Mantis can be kept together throughout their lives and they will not show aggression towards each other as long as they receive enough food.

But in general, praying mantis live alone, in nature as well as in captivity. Therefore the only reason to communicate with each other is their urge to reproduce.

Sending out pheromones only means that the female is theoretically willing to mate, but it does not mean, that the male is safe to approach her. He might still be used as a snack instead of mating.

The mantis can make a sound by rubbing these inner wings set against the abdomen. This sound is meant to display threats.

How do Praying Mantis Interact With Each Other?

Not every praying mantis species shows these aggressions towards each other, but most do.

The majority of praying mantis species have an ear, but it’s nothing like human ears.

The single ear of the praying mantis is located on the bottom of their thorax, in the middle of their “chest”. This ear is sensitive to ultrasonic hearing. That means that praying mantis are able to hear a very high frequency above 20,000 hertz. This is just outside the range of human hearing.

This ultrasonic ear allows praying mantis to hear bats flying. Since many male praying mantises choose to fly at night to search for a female to mate with, bats are among the very few predators they have to face.

When a praying mantis senses an approaching bat, it starts dropping from the sky by spiraling downwards to avoid being caught by the bat.

As a whole, praying mantis can hear, but their hearing is very specific and only includes frequencies above 20,000 hertz that allows them to stay away from the predators of the night: The bats.

When you see a praying mantis, it is hard to not look into these crazy huge, compound eyes. These eyes allow the praying mantis to see three-dimensional. This does not seem too impressive from a human point of view, but in fact, praying mantis are the only insects in the world, that we know of, that can see in 3D. No other insect can see three dimensions.

As a whole, praying mantis can see fairly well. Their main sense is seeing, which they primarily use for hunting their prey. The three-dimensional view is based on movements. This is why a praying mantis will wait until prey approaches and attacks quickly.

Praying mantis only eats living creatures. That makes sense, given the fact, that their seeing is based on movements around them. They will not take a dead and therefore not moving insect as prey.

The eyes of the praying mantis are made of thousands of light receptors. These are called ommatidia. If you look into the eyes of a praying mantis, you seem to see a pupil.

This dark spot is actually not a pupil but many light receptors that absorb all wavelengths of light and therefore appear black. It only looks like a pupil because of the angle.

All the light receptors around that dark pupil-like spot reflect only certain wavelengths.

This is why the rest of the eye can appear in crazy colors such as of course white, but also green, brown, and even purple.