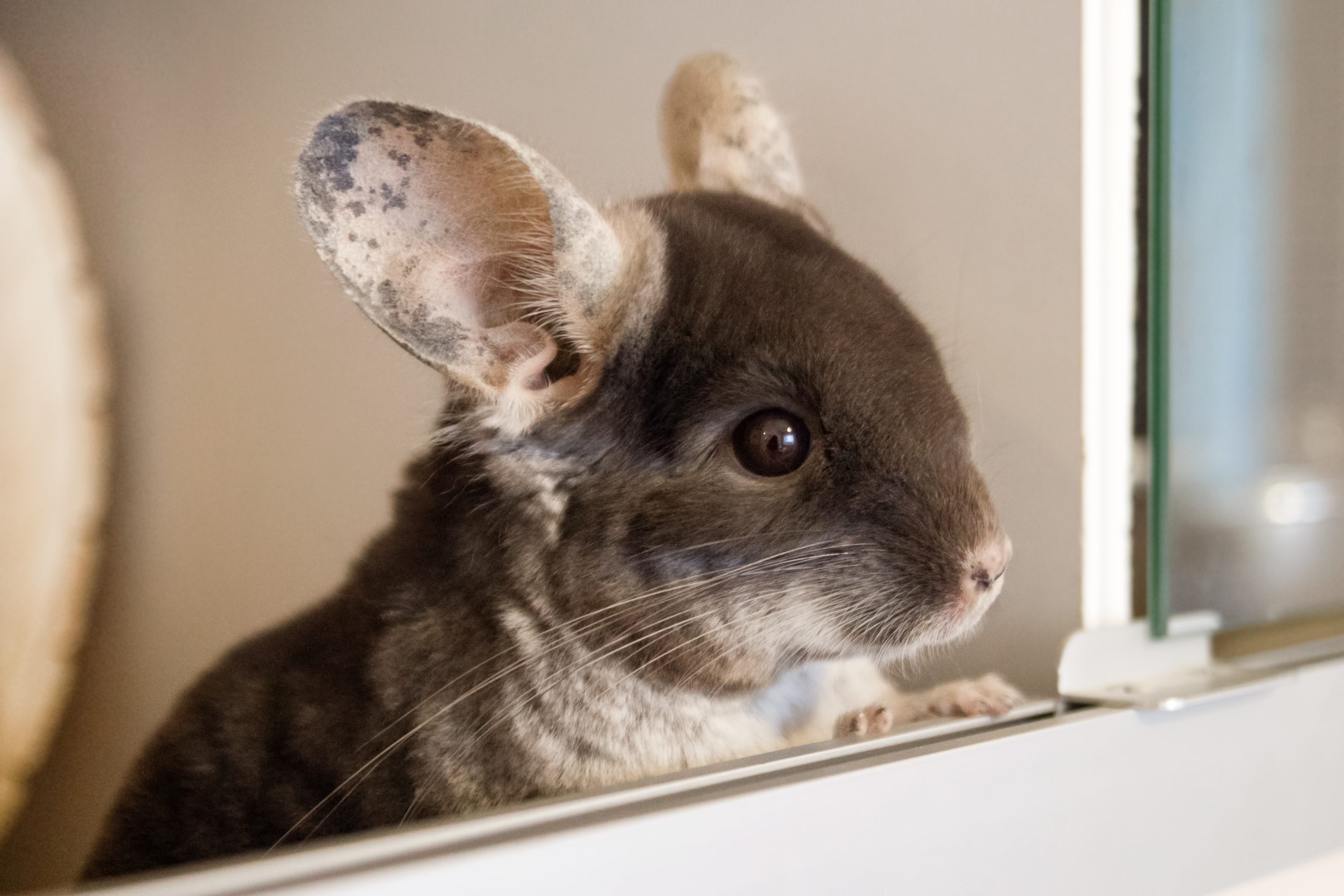 Chinchillas are rather shy rodents that are usually active during the night and at dusk and dawn. They have an energetic and playful character, are curious by nature, and love to explore new things and environments. Mental stimulation is at least as important as physical exercise. Therefore it is essential to offer a pet chinchilla various things to keep it entertained and thereby happy and healthy.

As a whole, an entertaining cage should be big enough for a chinchilla to play, run, jump, and climb. Toys chew toys, hiding places, shelves, and various platforms, regular sand baths, and regular new items in the cage will help to keep the pet entertained.

In the following, you will find many ideas on how to keep your chinchilla entertained and stimulated.

How do You Keep Chinchillas Stimulated?

Chinchillas can easily get bored. They are very energetic and active animals. This is why mental and physical stimulation is very important in order to keep your chinchilla happy and healthy.

Things such as hideouts, dust baths, chew toys, tunnels, various levels, hammocks to climb on, different types of hay in their diet, or a nice play area outside of the cage are things that entertain your chinchilla.

Here are a number of things that you can offer your chinchilla.

What Toys are the Best for Chinchillas?

Chinchillas love their dust baths. You can acquire a chinchilla sand bath in almost any pet store, or online. Do not buy bird sand instead, because it contains small shell pieces that can cut the chinchillas’ feet.

You can use any bowl that is large enough. The chinchilla sand can be about 1 to 2 inches deep. Chinchillas love to roll around in the dust to clean their fur from any oil or dirt. They might urinate in the sand or leave some poop, which is totally normal and ok. You can let the sand run through a sieve and reuse it a few times. The sand should be exchanged at least once a week, no matter if there were any droppings in it, or not.

Since the chinchillas only use the sand bath under your supervision, you can use plastic bowls because they won’t chew on the bowl as long as they have to opportunity to sand bath instead.

A sand bath bowl like this is a good place for a nice chinchilla bath.

If you are looking for good chinchilla dust, here is our recommendation. Oxbow offers high-quality dust for chinchillas.

The teeth of chinchillas continuously grow throughout their lives. This is why chewing on fiber, wood, and other materials is important for chinchillas. It helps them to keep their teeth at a healthy length and also supports their dental health.

Chew toys for chinchillas can be acquired in most pet stores. Make sure not to chew toys for other animals because the nutritious needs of chinchillas are different than those of many other rodents. A chew toy for a chinchilla is usually not a treat to eat, it is only something to gnaw on.

Great chew toys are wooden sticks, twigs, and branches made of safe types of wood such as kiln-dried pine, apple tree, or poplar. The wood has to be organic and not treated with any chemicals such as pesticides or herbicides.

If you want to know more about safe types of woods, check out this article: Which wood is safe for chinchillas?

Other great options for chew toys are hay cubes made of Timothy hay, or occasionally cubes with Alfalfa or Oat Grass. The cubes make great toys, but due to the higher calcium and protein levels of Alfalfa and the higher phosphorus level of Oat Grass. Timothy hay cubes can be offered at all times.

There are also plenty of other materials that can be safely used as chew toys for chinchillas such as Banana leaves, coconut shells and coconut rope, cuttle fishbone, mineral stones, and pumice stones.

You can also offer your chinchillas in cardboard boxes or tubes. Eating some of the paper is not an issue, but if your chinchilla decides to eat it all at once, you might rather want to go for other chew toys.

Things to Hide in

Chinchillas are shy by nature. They need things to hide in to feel safe.

They should have several places to hide and rest in. Houses for sleeping, preferably made of wood or hay, tunnels, and boxes are great for chinchillas. Everything that is not on the bottom floor has to be attached to the cage walls or the floor so that it does not fall down when the chinchillas jump around.

Many wooden hideouts have glue or nails in them that are revealed when chinchillas chew on them. When you buy a house, read the reviews of other customers and make sure that it’s safe for chinchillas.

The hideouts can be hanging from the ceiling, too, like this cozy option:

There are hammock options that are more like tunnels and chinchillas can lay in the tunnel or on top of the hammock, just like this one.

Whatever you use in a chinchillas enclosure, examine it first, make sure that no nails stand out, or can be easily revealed, and no strings are loose. Once it is inside of the cage, constantly check if the conditions are still good, or if your chins decided to destroy the house in a way that might make it a rather risky toy. If you are unsure, you should rather remove it.

Other hideout options are plumping equipment such as PVC pipes, or clay pots. Make sure the chinchilla fits safely and does not get stuck.

You can hide hay inside of paper rolls, and let some stand out. You can hang these paper rolls from the ceiling with wires (don’t use glue on the paper rolls). Make sure that the chinchillas cannot strangle themselves with the wires.

You can use hay cubes, ray racks, hay houses, or chew toys.

Chinchillas are super energetic and love to climb and jump. They love various platforms and shelves, ladders, and stuff that hangs from above such as hammocks. Everything should be fixated in a way that it cannot fall down and hurt the chinchilla in any way.

Chins love to exercise, therefore a large exercise wheel might be a good idea. The inside of the wheel has to be solid so that the chin cannot get limp or the tail entrapped. A hamster wheel is way too small, even for baby chins.

High-quality exercise wheels that are big enough for chinchillas are not super cheap, but it’s better to buy a high-quality wheel than to risk any injuries to your pet.

The enclosure of a chinchilla should be cleaned thoroughly at least once a week. When you clean the cage, you can change the positions of the shelves, the houses, and the toys.

Don’t use the same toys every time. Take some toys out, put some others in the enclosure, and make sure that your chinchillas have plenty of new stuff to discover when they get back into their enclosure.

Here are some fun ideas for chinchilla toys and shelves:

Toys don’t have to be expensive. You can use cardboard shoeboxes, or toilet paper rolls, as well as untreated, organic wood from outside. Always make sure to only use types of wood that are safe for chinchillas.

You can find a list of all safe wood types here: Which wood is safe for chinchillas?

You can also exchange the toys regularly, so that chinchillas have “new” toys in their cage, even though they are not that new after all.

Play Area Outside of the Enclosure

Chinchillas are curious animals that love to explore.

A play area outside of the cage is essential if the cage is not very big. But even with a big cage, chinchillas will enjoy running around in a new room and exploring new items. Make sure that chinchillas cannot reach anything that is potentially dangerous for them, such as electric wires, cords, vents, big glass items, or any kind of “human food”.

All doors have to be closed, and no other pets can be free in the room, such as cats or dogs. You should always stay in the room with the chinchilla to prevent any accidents.

Most chinchilla owners feed Timothy hay as their main food source. But it’s nice to also give some other hay or grass from time to time to make their diet more interesting. Alfalfa hay, oat hay, and some other types of hay can make a great treat in addition to their regular hay.

Here is a list of hay types that can be fed to your chinchilla: What is the best hay for a chinchilla?

What is a Chinchilla’s Favorite Thing to do?

Chinchillas love to explore, run, and jump. They are very active animals that need a lot of space to roam around. Chinchillas love their regular sand baths, climbing and jumping around, and chewing on hard materials such as wood and also fiber.

Do Chinchillas Need a Wheel?

Chinchillas do not necessarily need an exercise wheel in their enclosure. But they are very active and energetic animals that might like a good exercise wheel. If you decide to get a wheel for your chins, make sure that it is big enough, and the inside fully closed. There should not be any slots where a chinchilla’s limp or tail can get stuck.

Here is a wheel that even promises to be more silent than usual wheels:

Running balls are not good for chinchillas. Most of these balls are designed for smaller animals such as hamsters. Another important reason to avoid running balls is the fact that chinchillas have very dense fur and they are therefore prone to overheating. And a fully closed plastic ball can heat up very easily which can lead to serious health issues for your pet.