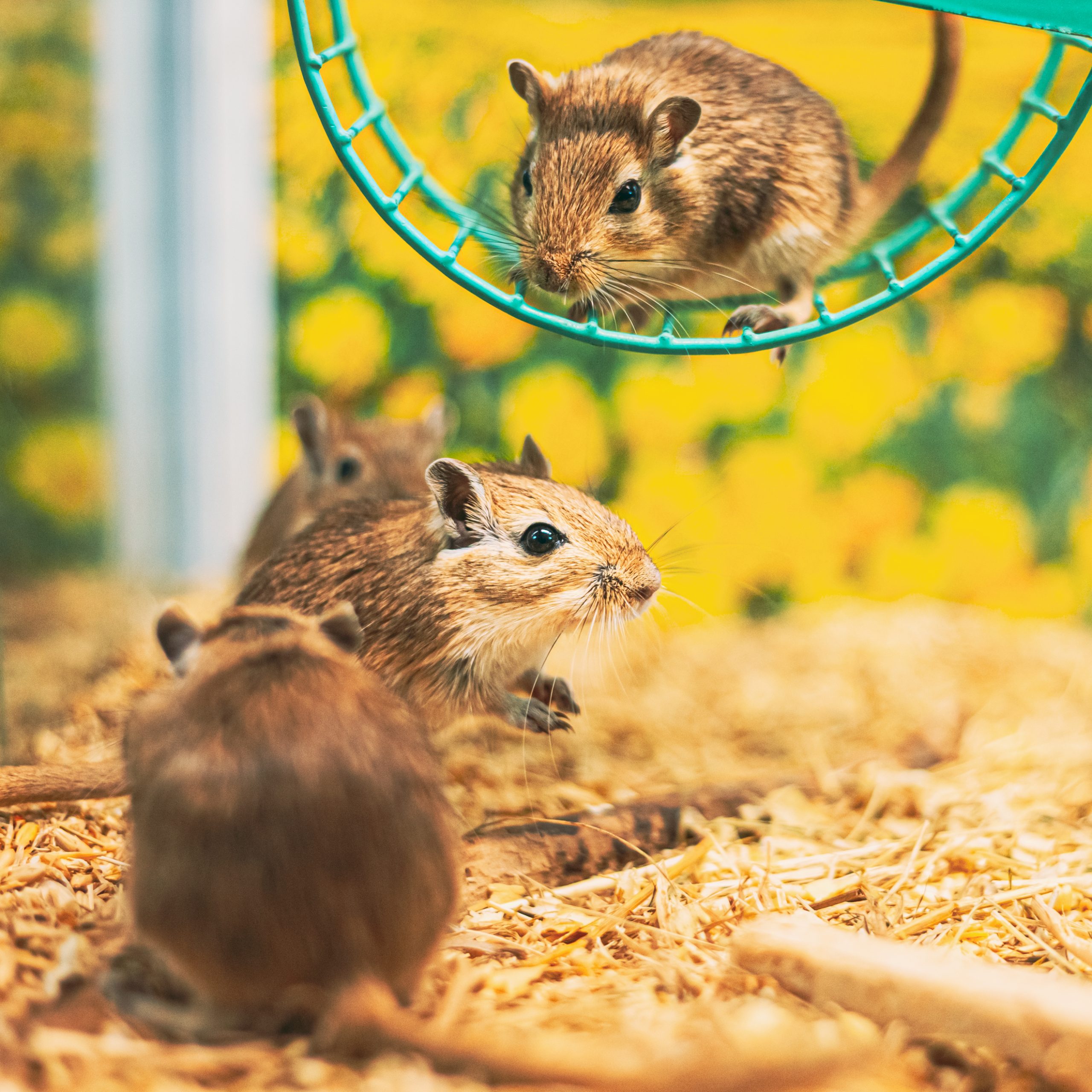 Gerbils can make great pets, but it is important to keep in mind that males and females should not live together if you are not planning to breed. These cute little rodents can reproduce fairly quickly, therefore it is recommended to keep pet gerbils of only one gender or neutered, to prevent mating and reproduction. Most gerbil species are very social and need to be kept in groups of at least two. The Mongolian Gerbil is one of the most popular pet gerbils and should never to kept alone as solitude can stress them out.

As a whole, gerbils reproduce sexually. That means that both male and female is needed for reproduction. The fertilization happens inside of the female. The pregnancy lasts around 23-26 days on average and the babies are hairless, blind, and deaf for the first few days.

In the following, you will find plenty of information on gerbils’ mating rituals, the pregnancy, how quickly they reproduce, and why gerbils sometimes eat their babies.

Gerbils reach sexual maturity by the age of seven to twelve weeks. Once they found a partner, they will stay together for the rest of their lives. In the wild most gerbils live in pairs and their pups stay with them until they become mature. After reaching maturity the young gerbils have to leave the nest and the pair will continue to reproduce.

As a whole, gerbils have a mating process that requires both male and female gerbils. When the female is in heat she will thumb her hind feet on the ground and send out pheromones to signalize that she is ready to mate. The male will mount her from behind and fertilize her.

Once the female is in heat, the male gerbil will get very excited. Both female and male might be thumbing their hind feet on the ground and the male will start chasing the female through the cage to mount her.

When the female is ready to mate, she will stand still and allow the male to mount her. The fertilization takes place in the female.

Both males and females might squeak. The entire mating process can take up to several hours and the gerbils should not be distracted.

After mating, both males and females will be grooming themselves. If both gerbils are healthy and in good condition, chances are very high that the female is pregnant and will give live birth to several pups within the next three to four weeks.

How Long Does a Gerbil’s Pregnancy Last?

The pregnancy of a female gerbil usually lasts around three to four weeks. The baby gerbils are called pups and they are born blind, deaf, and naked. Right after giving birth, the female and male might mate again.

After only six to eight weeks the pups are mature and can leave their parents.

How do Gerbils Act When They are Pregnant?

Female gerbils can reproduce quite frequently. After mating, it takes around two weeks to see the differences in her body such as a bigger belly. If you weigh your female regularly, you will also detect an increase in weight if she is pregnant.

When a female is pregnant, she might want more privacy than usual and build a cozy nest for her pups. You can offer your gerbils some tissues for an extra soft nest.

How Do Gerbils Give Birth?

Female gerbils usually don’t make any sounds while giving birth. They will give birth to up to ten pups inside of their nest. The baby gerbils are being pushed through the vagina and out of the birth canal through muscle contractions of the uterus.

How Often do Gerbils Get Pregnant?

Gerbils reach sexual maturity after only seven to twelve weeks. They can reproduce until they are around two years old. The frequency of pregnancies is dependent on various factors such as environmental factors such as the temperature and weather, the health condition of the gerbils, age, and malnutrition.

Female gerbils go into heat very frequently. On average a female gerbil is ready to successfully mate every four to seven days.

Every time a female is in heat, the males have the chance to successfully mate with her. Pregnancy lasts around three to four weeks and right after giving birth, the female can become pregnant again.

Let’s assume that we have a pair of ordinary, healthy gerbils that enjoy each other’s company and want to reproduce.

If they start to reproduce at the age of 3 months and continue to reproduce until they are 2 years old, they would theoretically be able to make 84 babies during 17 pregnancies throughout their lifetimes.

In this assumption, every pregnancy lasts 4 weeks and the female is pregnant one week after giving birth to an average of five gerbils.

Of course, this is just a theoretical example and the majority of gerbils will make way fewer pups throughout their lives. But this example shows that breeding can quickly get out of control if not done properly with some expertise.

How Fast Do Gerbils Reproduce?

Gerbils can reproduce very quickly. Since female gerbils can come in heat every four to seven days, and the pregnancy only lasts three to four weeks, they can produce many pups during their lives and would theoretically be able to give birth again only about four to six weeks after giving birth to a bunch of pups.

Within only one year one pair of female and male gerbils would theoretically be able to give birth to an average of 48 baby gerbils. Female gerbils can become pregnant again right after giving birth.

If the breeding gets out of control and a breeder is not able to separate young male and female siblings they might even mate with each other even though they would not do so in the wild.

But the lack of possibilities will encourage inbreeding.

When Can You Separate Baby Gerbils From Their Mother?

When a gerbil is born, it is blind, deaf, and naked for the first few days. During the first few weeks, the mother and father gerbil will take turns in keeping their pups warm and they will only feed on their mothers’ milk.

It is safe to say that it is possible to separate a gerbil from its mother between six to eight weeks after it was born.

After five to seven weeks most gerbils would be able to survive without their parents. In the wild, gerbils will stay with their parents a bit longer to make sure that they are ready for an independent life.

In captivity, there is often an issue with space and therefore the pups have to be separated from their parents.

Do Gerbils Eat Their Babies?

As a whole, gerbils can eat their babies. But a female gerbil will not eat her pups for no reason. Reasons can be stress, predators entering the tunnels, weakness of the mother, or a health condition with a pup.

In some cases, female gerbils eat some or even all of their pups. There is always a reason for such behavior. If the female does not have enough energy to care for all pups, she might kill and eat one or two of them to secure her own life and the life of the others.

Also if a pup is sick or not able to survive for any other reasons, she will rather kill and eat it instead of leaving it for any potential predators.

Will Gerbils Mate With Siblings?

As a whole, gerbils will accept a different-sex sibling or even a parent as a mating partner. But inbreeding often comes with negative consequences such as any kind of disabilities in the offspring. Therefore a gerbil will always tend to mate with a non-relative.

Gerbils reproduce quickly, just like mice, rats, or hamsters do. Now you might be wondering, how gerbils reproduce, and whether both males and females are needed for reproduction.

As a whole, yes, gerbils reproduce sexually. Gerbils are rodents that are categorized as mammals. All mammals that we know of practice sexual reproduction. Asexual reproduction does not naturally occur with gerbils. Without the fertilization of a male, the female cannot become pregnant.

Since males and females are both needed for reproduction, it is safe to keep various gerbils of one gender together, without the risk of breeding.

If you decide to keep a male and a female together, you will quickly end up with many pups.

There are quite a few animals that lay eggs to reproduce. Some of them are birds, fish, turtles, insects, and reptiles. The echidna and the platypus are the only mammals that lay eggs. All other mammals are not capable of laying eggs and are known for giving live birth.

Gerbils do not lay eggs. Female gerbils give live birth to hairless, blind, deaf pups. The males and females take turns in keeping their babies warm until they don’t need it anymore.

After being born, gerbil babies are fed by their mothers for 3 to 4 weeks. After six to eight weeks on average, gerbils are considered grown-ups and they can care for themselves.

Can Gerbils Reproduce on Their Own?

Gerbils are not capable of reproducing on their own. Just like the majority of mammals, gerbils reproduce sexually and need a male and a female to mate and reproduce.

Can Gerbils Get Pregnant Without a Male?

Female gerbils cannot naturally get pregnant without a male. To reproduce a female has to be in heat and a male has to be present to be able to mount and fertilize her. After successful fertilization, the female gerbil will be pregnant for three to four weeks.