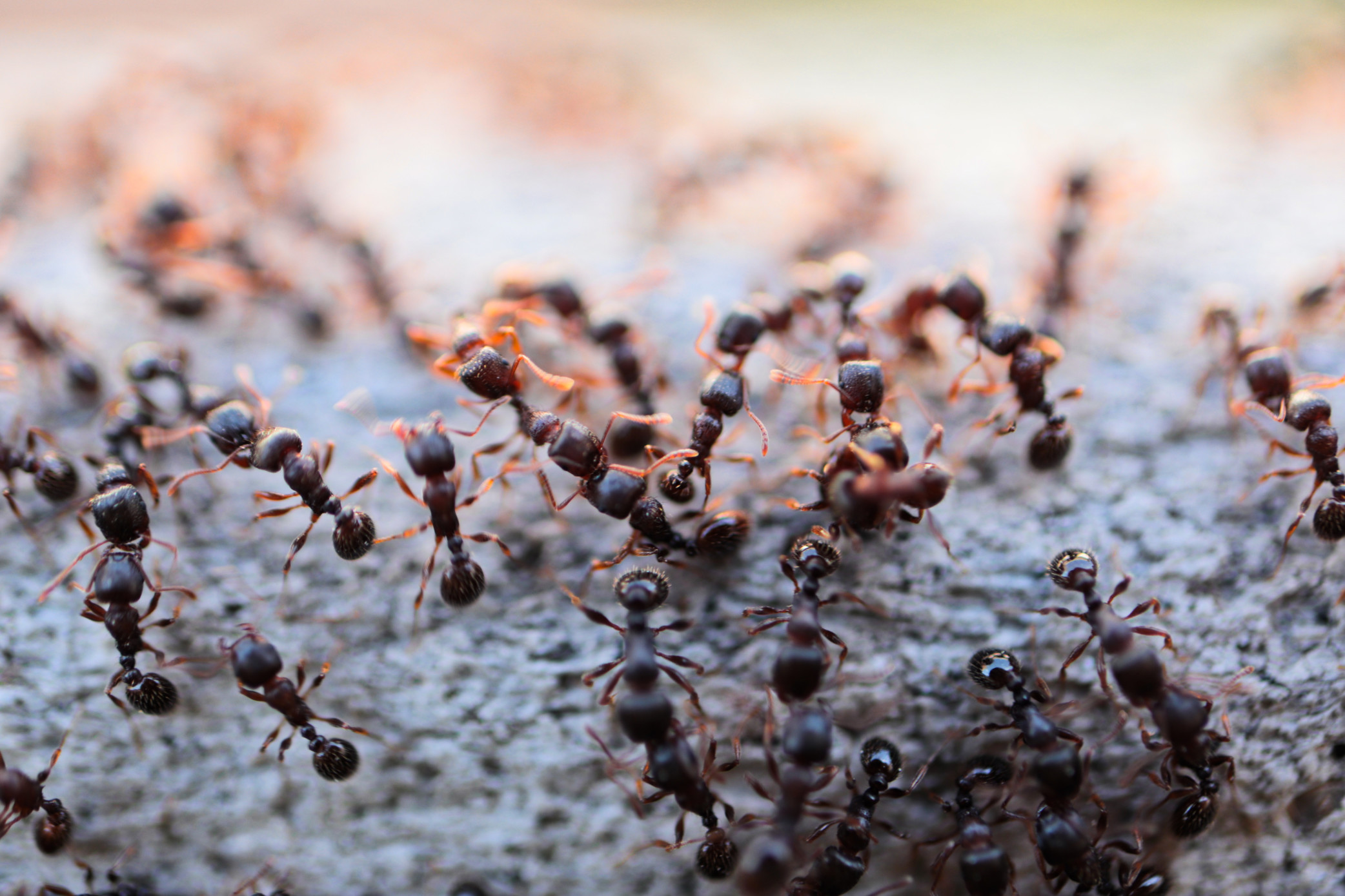 Looking at an ant colony we see thousands of ants crawling around, piling up sand and soil, collecting and carrying food around, building tunnels, and communicating with each other. Most of the ants we see are female worker ants. But there are also winged male drones flying around, soldiers and door guards protecting the colony from predators and from other ant colonies, and of course queen ants. Ant colonies are very different in their sizes. A wood ant colony can be home to up to 5 million ants whereas ants of the Temnothorax species usually have colonies of 50-300 workers.

As a whole an average ant colony is home to 100.000 to 500.000 ants, depending on the age, species, and environment. Colonies in captivity tend to be smaller. In nature so-called supercolonies with billions of ants can also be found although they are rare.

What Limits the Size of an Ant Colony?

Ant colonies exist in many different sizes. They can literally come in any size and shape. The majority starts with a single inseminated queen ant. Her life task is to lay eggs and thereby ensure the survival of the colony.

Some ant keepers are afraid that their colonies will grow to a size where they can´t handle or care for them properly anymore. But don´t worry, there are things that you can do when your colony gets too big.

You can read more about that in my article about what to do when an ant colony gets too big.

Normally, ant colonies do not grow forever. There are several limitations to the size of an ant nest and colony depending on various factors.

Of course, the obstacles to endless growth can differ for ant colonies in captivity, but some are the same.

As a whole, the size of an ant colony can be limited by their species, the queen, predators, the size of the territory, the nesting space, the environment, and us humans.

There are also other factors, but these are the most important ones.

Different ant species end up with different colony sizes. There is no correlation between the size of an ant and its colony size. The sizes can range from just a few workers to millions of workers.

There are examples of rather big ants such as the Dinoponera australis living in tiny colonies of around 14 to 30 worker ants. They can be found in central South America.

Carebara diversa is a species of ants that grows very quickly in colony size. This species usually has several queens in her colony and they often have colony sizes of 250.000 ants and more.

Despite this, the Carebara diversa is a popular ant for experienced ant keepers, because the growth is so quick and there is always a lot going on in the nest.

Some ants, such as the Linepithema humile, formerly known as Iridomyrmex humilis, also called “Argentine ants” were imported into new environments by us humans. They faced a whole new environment with fewer predators and were able to start so-called supercolonies.

The Argentine ants usually have nest sizes of 150.000 ants on average. But in the supercolonies, they can grow to basically infinite sizes unless they are stopped by humans or other supercolonies of ants.

If you want to keep your own ant colony then you might want to avoid colonies that get too big.

Therefore the speed of the queen laying eggs, her lifespan, and the fact that if there are one or more queens in a colony there are limitations to the colony’s growth.

By the way, you will only very rarely see the queen of an established colony outside because she will never come out of her colony unless something is seriously wrong.

Number of Eggs the Queen Lays

For example, the queen ant of a wood ant colony can lay up to 50.000 eggs each year and around 1 million eggs in her lifetime.

The Lifespan of a Queen Ant

Queen ants have a certain length of life. Some queen ants only live a few years while others can live up to 25 years.

In a colony with one queen, the life of the colony is fully dependent on the queen’s lifespan. If the queen dies, the colony will also slowly but steadily die out due to a lack of egg production.

The lifespan of a queen ant is often coupled with the lifespan of the colony. You can read more about how long an ant colony lasts in one of our other articles.

Number of Queen Ants in a Nest

Some ant species have several queens and therefore the colony is not completely dependent on one queen’s life.

The Carebara diversa (former Pheidologeton diversus) has several queens in her colony as well as the Formica rufa (Red wood ant).

Their colonies have a very quick colony growth and if one queen dies, the colony can still keep growing due to the other queens in the nest.

Every ant species has predators in nature. The most common ones are other ant colonies, spiders, birds, Anteaters, lizards, insects such as wasps or the Alcon Blue Butterfly Caterpillars, bugs such as the antlions, and beetles such as the paussinae beetle and the oogpister Beetle.

The predators are an essential part of the ecosystem. They make sure that the ant colonies cannot grow too much and always stay at a level that benefits nature.

An exception is again the supercolony of ants developing in several parts of the world. The import of ants in a new environment brought them to places with no or only very few predators.

This gave them the chance to spread out extremely quickly.

The biggest enemy of ants is in fact other ants.

Most ant colonies have a certain territory size for their nest. The territory of the Formica Rufa for example is about the size of a soccer field. In this area, they can eat up to 100.000 insects per day.

Within this territory ants, hunt and harvest, and ants from other colonies are not welcome. Ants from different species and colonies will compete with each other and even kill or enslave each other.

Queen ants that settle down too close to their home colony after their nuptial flight, might even be killed by the workers of their old colony.

This behavior enables native ant colonies to kill or suppress the growth of invasive species and limits the number of total ants and ant colonies if they grow too much. As you can see, even fighting ants benefit the ecosystem

Depending on the species, many ants have limitations in regard to their nesting space. There are ant species such as the Plant-Ant Pseudomyrmex termitarius.

Their average colony size is around 75 worker ants. The nest is built in a host plant. This living arrangement is a mutual relationship in which the plant also benefits from the ant colony.

In order to benefit the mutual relationship, the ant colony size is limited by the plant.

Other ants live in very small spaces such as snail shells or in acorns. One example is the Temnothorax nylanderi in western Europe.

They grow up to around 100 ants in their colony and their living space also limits their growth.

The environment is probably the main factor influencing the ant colony size. Depending on the climate, potential natural disasters such as landslides, forest fires or storms, the range of food in the area, and the predators, ants are highly influenced by the environment.

Ants from colder regions hibernate. This also affects ants in captivity. Ants from tropical areas do not hibernate but will also slow down if it gets colder. Hibernation slows the reproduction down since the ants will just rest during this time and stop growing their colony.

It is not possible to fool your pet ants into thinking there is no winter, even though you keep them nice and warm. They know deep down with their biological clock, that it is winter and that they need to slow down.

If you live in a cold region, but you still see ants crawling around, they might be imported ants such as the pharaoh ant or argentine ant that don’t hibernate but try to stay somewhere warm to survive winter.

In areas that are inhabited by humans, ants adapt a lot. But of course, street building, housing or intentionally destroying ant nests do have a big impact on colony growth.

Lifting the top of an ant nest due to curiosity or ignorance can have a big impact on the colony because of the change in temperature within the nest.

Pesticides also highly affect ants. Even if the pesticides are not intended to kill the ants but for example other insects, they can harm or kill ants or change their behavior in becoming more aggressive.

What is the Biggest Ant Colony Ever?

Ant colonies can come in all sizes. One of the biggest ant colonies ever detected is the intercontinental supercolony of Argentine Ant along the European Mediterranean coast with over 6000km (= approx. 3728 miles) in length. This supercolony is claimed to be a part of a megacolony stretching over Japan, California, and Europe.

How Deep do Ant Colonies Go?

Depending on the ant species, the age of the colony, and of course the environment, the nest you see on the ground is just the tip of the actual ant nest. The anthill is often on top of a tree stump which is used as part of the nest. A huge part of the ant nest is underground and has a complex tunnel system with many chambers.

The actual depth beneath ground level can be anything between a few inches and up to 13 feet. #

The record of 13 feet is currently held by the Asian Messor aciculatus.

How Long do Ant Colonies Last

Ant colonies with one queen ant can last over the lifespan of that particular queen. Depending on the species, the queen can live a few years and up to 25 or more years. Some ant colonies have several queens and can thereby last a lot longer than colonies with only one queen.

After the queen of a colony with only one queen dies, the workers can live on, but the colony will eventually die due to the lack of further eggs.