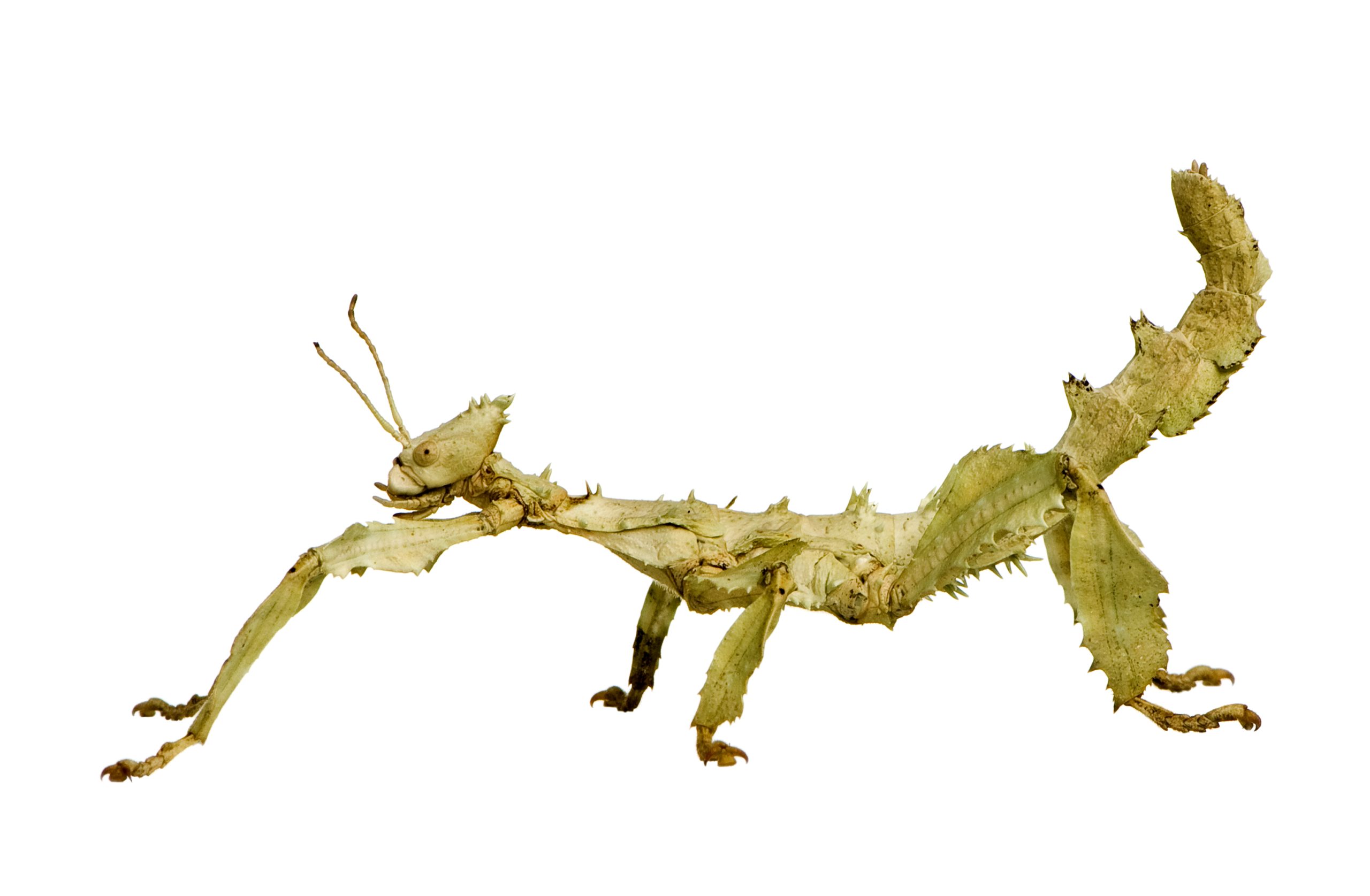 The Extatosoma Tiaratum has a striking appearance and is one of the most popular pet stick bug species. It is native to the tropical regions of Australia and is the master of disguise, mimicking dried-out leaves.

Just like all stick insect species, the Extatosoma Tiaratum eats exclusively plants. This type of behavior is called phytophagous. It is the same as “herbivorous”, but that term is usually used for mammals.

Feeding an Extatosoma Tiaratum is easy because it is polyphagous. That means that the diet can consist of many different types of leaves such as bramble, eucalyptus, hawthorn, oak, pyracantha, raspberry, rose, and many others.

In Australia, it feeds primarily on the different types of eucalyptus leaves.

The enclosure of this species should be at least 11 inches tall. The floor should be covered with a substrate such as a mixture of soil and sand, vermiculite, or simply a paper towel to be able to see the eggs better.

Place the enclosure in a room with natural light, but not in a spot with direct sunlight. Sunlight can heat up a tank very quickly and anything above 86° F (= 30° C) can kill the Extatosoma Tiaratum.

The enclosure should be properly ventilated to prevent mold. You can use a tall glass or plastic tank with a mesh ceiling.

If the enclosure gets too hot, it can slow the growth down, lead to smaller females, and to smaller misshaped eggs.

The Extatosoma Tiaratum can go with a humidity of 60% to 80%.

Especially in winter, when the air is dry from heating, you should mist the enclosure regularly to make sure that the pet stick bug has enough humidity in the tank to be able to molt properly.

You can spray some bottled spring water or de-chlorinized tap water on the substrate, the walls, and the feeder plants. Misting the leaves allows the leafy walking sticks to stay hydrated.

This species has a very special appearance. When the nymphs are born, they mimic fire ants instead of leaves.

This makes sense because in nature the females fling the ova (= eggs) to the floor and the Australian fire ants will collect the eggs, assuming that it is food. The ova has a tasty coat that the ants will eat and afterward dispost the ova on their garbage inside the anthill.

The ova will stay there during the cold months in the perfect humidity and temperature for the eggs to incubate and will hatch in spring. When they hatch, they mimic ants and walk out of the anthill without being attacked or disturbed.

As adults, the females can grow up to 6 inches while the males only reach about 4.5 inches. They have light green and light brown to dark brown coloration and have a really unique appearance with their thorns and perfect camouflage between leaves.

This species has wings but the wings of the females are tiny and cannot be used for flying. The males can fly.

The males and females have very different lifespans. The females reach maturity after approximately 6 months, depending on the temperature, and have a total life expectancy of up to a year. In some cases, the females can even live up to 18 months. The males only live between 6 and 9 months.

The Extatosoma Tiaratum is able to reproduce both sexually and parthenogenetically.

The females of this species have a species way to lay the eggs. Instead of burying them in the soil or dropping them on the floor, they catapult their ova out of the abdomen. When you keep female pet Giant Prickly Stick Insects you might hear the sound of the eggs hitting the walls of the enclosure.

If you own mature females, you can use paper towels as a substrate to be able to control the population. The eggs can be easily seen on the ground and be removed for either incubation or to destroy them.

Do not throw away any substrate without freezing (at least for 24 hours!) or burning it. You might accidentally throw away the ova which could hatch in the garbage. The nymphs can escape into the wild and disturb the local ecosystem.

In Australia in the wild, the eggs will be collected by the Australian Fire Ants. They assume that the eggs are a food source.

After eating the tasty part of the ova, they throw away the ova on their garbage hill and leave it there until the eggs finally hatch. This can take 5 – 6 months, and in some rare cases even up to 2 years!

After hatching, the nymphs look like fire ants and can walk out of the anthill without being attacked. Isn’t nature just amazing?

This species is a great pet for beginners. It is rather easy to care for and looks super cool.

It has some defense mechanisms that are not dangerous for humans.

When the Extatosoma Tiaratum feels threatened it can mimic a scorpion by curling the abdomen up and posing the front legs in a position just like scorpions do. With this gesture, many predators will be scared away, but it’s harmless for humans.

The species also has a chemical, colorless defense spray against predators, but it will rarely use it, and the chemical is harmless to humans. It smells a bit like toffee