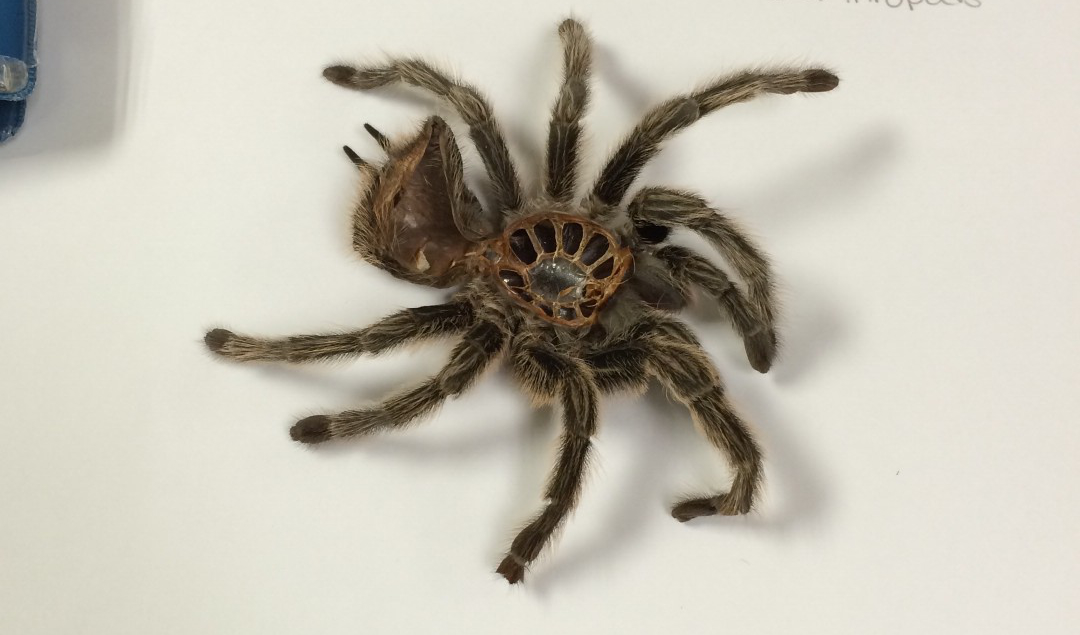 Almost everyone knows that most reptiles shed their skin but did you know that tarantulas do something very similar? The tarantula sheds its entire exoskeleton in a process called molting and in this guide I will tell you exactly what you have to look out for and what to do when your pet tarantula is molting.

Why Do Tarantulas Molt?

The first question that I should answer right away is why do they even molt in the first place?

As a whole, tarantulas molt because they have a rigid exoskeleton that is not capable of growing with them. So when the tarantula outgrows its exoskeleton then it will shed it. It grows a new exoskeleton under the old one that will start to harden once it shed the old exoskeleton.

Younger tarantulas will molt much more often than adult tarantulas simply because they grow faster.

You will probably be shocked the first time your tarantula molts because it will either lay on its bag or on its side completely still when the molting process starts.

Don´t worry your tarantula is most likely fine and it will tart twitching in a few minutes to loosen the old exoskeleton.

The whole molting process can take anywhere between 30 minutes and several hours.

Even though it might be tempting it is absolutely not recommended to try and help or even tough the tarantula in this state.

The molting process is by far the most vulnerable moment of any tarantulas life and any disturbance can stress your tarantula unnecessarily.

Signs That your Tarantula is About to Molt

You might be wondering how you can tell if your tarantula is about to molt and really there are a couple of things that can give you a hint but it is quite hard to tell for sure.

The Tarantula Will Stop Eating

The first sign that you can often see is that your tarantula eats less and then it all of a sudden won´t eat at all.

It won´t even show any interest in food and simply ignore any insect you put in its cage.

It will completely stop eating about two or three weeks before it molts. Although this time tends to vary quite a lot depending on the age and species of the tarantula.

The Tarantula Will be More Agressive

The tarantulas will become quite aggressive and it will react badly when you look into the cage or even dare to open its cage.

It will either hide away or it might even warn you by raising its front legs and showing its fangs.

Tarantulas often show this sort of behavior because they are in a very vulnerable state when they prepare for molting and they don´t like anyone to be near them when they are in this state.

So it is best to leave them alone and don´t handle them at all.

The Tarantula Will be Hiding a Lot and be Less Active

Because it feels vulnerable it will obviously hide a lot too.

It is not unusual to see, or rather not see, your tarantula hide all day. A tarantula that is preparing itself for molting will usually not come out of its hiding spot unless it really has to.

The Tarantulas Color Will Become Dull

Probably one of the best hints is the dull coloration of your tarantula. The old exoskeleton will slowly lose its coloration and especially the abdomen will become darker.

You will usually be able to see a subtle difference in coloration about a week before molting.

But how exactly does the molting process go? Well, the process actually starts when the tarantula realizes that it has outgrown its exoskeleton.

This is usually about three weeks before it molts.

At this point, a new exoskeleton is starting to grow under the old exoskeleton. The spider won´t show any signs of molting yet.

Some tarantulas might start easing or might start searching for more food at this point because they need a lot of food and energy to grow that new exoskeleton.

Now the tarantula is in a very vulnerable state and most of the behavior patterns I described above will become obvious.

The tarantula will hide and it will only rarely come out of its hiding spot.

The next step is where a lot of new tarantula owners get a little heart attack. The tarantula will lay itself on the bag or on the side and it will almost look like it is dead.

But don´t worry! This is absolutely normal. By lying on its back or on its side the tarantula makes it easier for itself to shed the old exoskeleton.

It will not move for a few minutes and then it will start moving its abdomen up and down. This motion helps separate the old from the new exoskeleton.

The tarantula will bulge up its abdomen until the old exoskeleton rips on the bottom.

Once this happens it will start to twitch its legs to force the old exoskeleton open and push itself out.

It can take between 30 minutes and up to 3 hours for a tarantula to completely shed its old exoskeleton.

Once it is done molting the new exoskeleton will start hardening fully. This can take anywhere between 5 to 10 days.

During this time the tarantula will hide again and even though it is very hungry it will only rarely eat. It is important to leave the tarantula alone and don´t disturb it until the new exoskeleton is fully hardened.

Once this process is done it will be very hungry. At this point, it is best to feed your tarantula about twice as much as you usually would for about a week.

How Often do Tarantulas Molt?

Tarantulas molt less often the older they get. This is also why it is almost impossible to give you a definitive answer.

As a whole, young tarantulas will molt once every month in the beginning and after the first few molts only every other month. Adult tarantulas will molt much less often. Only about once or twice a year. The older a tarantula gets the slower it will grow so it doesn´t have to molt as often anymore.

In the beginning, you will find that your juvenile tarantulas tend to molt pretty much all the time. But don´t worry. Young tarantulas usually molt without big complications and significantly faster than adult tarantulas.

The older they get the less frequent they will molt.

Adult tarantulas will usually only molt around once or twice a year and adult male spiders will only molt until they are adults. At this point, the male tarantula will search for a mate and then die about a year after its final molt.

Adult female tarantulas tend to live much longer than male tarantulas and they will continuously molt after they are fully grown but only once a year or even less frequently.