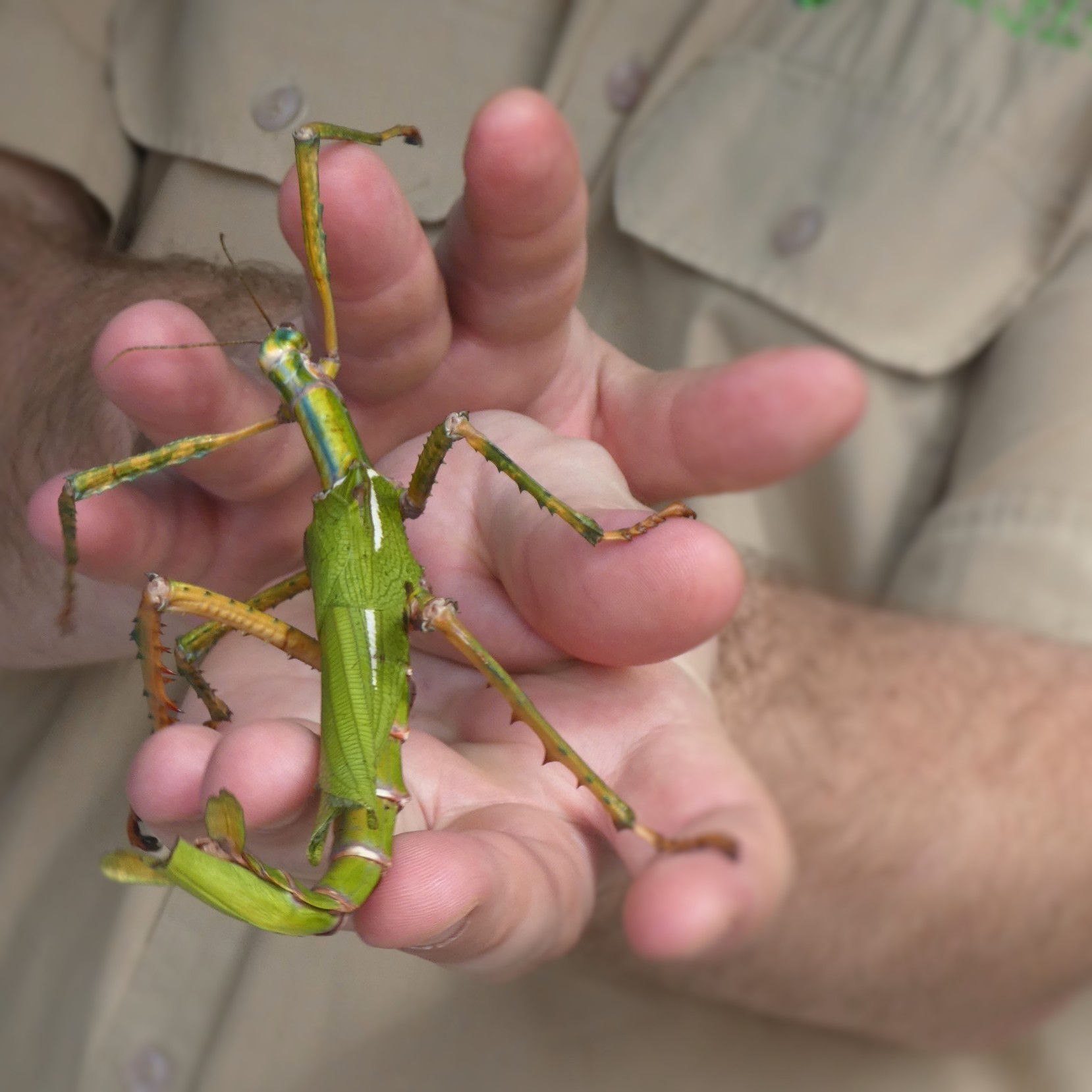 But it is only a bit larger than the Goliath Stick Insect, and also one of the most colorful Phasmids with partly striking red wings and a bright green body.

It is native to Australia.

This species is a popular food for birds. But since they camouflage excellently on trees, it is hard to see them. If a predator spotted a Eurycnema Goliath, it will reveal its bright red wings and try to scare the enemy away. They can also make some hissing sounds and kick their spiny legs towards predators.

And if none of that worked to scare the predator away, it can still show the dark spots underneath their hind limbs that appear like a pair of huge eyes.

The Goliath Stick Insect primarily feeds on eucalyptus. This makes it tricky for pet keepers who live in areas without eucalyptus in the region. Fresh leaves should always be provided.

Adults can also be fed with some other leaves, such as oak, but the nymphs will only eat eucalyptus.

If you decide to get a Goliath Stick Insect, and you have no eucalyptus in your area, you should get in touch with a florist, who can provide you with fresh eucalyptus twigs and leaves regularly. Make sure that no pesticides were used on the leaves.

Always rinse the leaves before you feed them to your pets, just in care.

The Goliath Stick Insect needs an enclosure with a lot of ventilation, therefore at least two walls should be made out of mesh. Enclosures with only glass or plastic walls keep the humidity inside and the air is just standing.

Only the Eurycnema Goliath nymphs right after their hatch need slightly higher humidity.

This species is a very large species and needs an appropriate cage size. The enclosure should be at least 24 inches (approx. 61 cm) high. The length and width can be around 12 inches long (30 cm).

Walking sticks tend to climb upwards and also need enough height to be able to molt while hanging upside down, therefore the height is more important than the length and width.

Females drop their ova on the ground, therefore you might want to add some substrate such as a mixture of humus and sand, vermiculite, or simply paper towels. The substrate does not need to retain and release humidity, since this species does not like it if it is too moist.

The Eurycnema Goliath needs a rather high temperature. The temperature in the enclosure should be around 77° F (25° C) and 86° F (30° C) all day long. Since most homes have a lower temperature, you might want to add a heater to the enclosure.

Make sure that the walking sticks can not reach the heater as they will burn themselves.

This species is used to some gentle ventilation and wind, therefore you can use a fan to blow through the enclosure several times a day.

This species does NOT need direct water spray, not even a fine mist of water. If you spray water on the Eurycnema Goliath, it can lead to diphtheria and death.

If you feel like the humidity is too low for your Goliath Stick Insect, you can spray a fine mist of water on the ground, but never directly on the walking sticks.

The females of this species can be anything between 7 inches (18 cm) and 8.7 inches (22 cm). Some females can even grow larger in nature. Their bodies are as thick as a thumb. The colors are green with yellow, white, sometimes violet patterns, and red wings that can be revealed when they feel threatened. The females can not fly.

The males can grow to a maximum of 6 inches (15 cm) and are slimmer than the males. The coloration is usually the same as the females. Other than females, the males can use their wings to fly.

The nymphs tend to camouflage between twigs instead of leaves. They are usually dark grey and brown.

This species takes around 4 to 8 months to reach maturity. Just like all species, the males have a shorter lifespan and usually die shortly after mating, while the females live a lot longer and lay the ova (= eggs). The total lifespan can be anything between 9 and 18 months.

The Goliath Stick Insect reproduces only sexually. That means that both males and females are needed to breed.

The females tend to simply drop the ova to the ground. You might want to use a paper towel as a substrate on the ground of the enclosure to be able to see the ova and collect it.

If you see a female catapulting something away from the abdomen, and you are wondering if this was an ova, you have probably seen stick insect poop being flung away.

The incubation period for this species is between 4 months and 15 months. The success rate is rather low with only 21% – 40% according to the Phasmid Study Group.

The females do produce a high amount of ova throughout their lives.

You can leave the ova on a slightly moist mixture of gravel and sand or vermiculite and sometimes mist it.

When the hatching has started, you should slightly increase the humidity, but never mist the nymphs directly.

Do not give up if the ova does not hatch after a few months. This species takes its time.

The Eurycnema Goliath is not an easy species to start with. It needs a higher temperature than room temperature, and you have to provide fresh eucalyptus at all times. Breeding is also not too easy due to the low success rate and long incubation period.

The Goliath Stick Insect comes with a very impressive appearance but is not as hardy as many other species. You need an enclosure that allows low ventilation, maybe a fan, a heater, low humidity, and a lot of patience.

If you are sure that you can provide all these things for the Eurycnema Goliath, and you are just startled by its amazing appearance and feel like this is the perfect fit for you then go for it.

But if you are not sure, if this species might be a bit too tricky as a pet, you might rather want to go for one of the easier species.