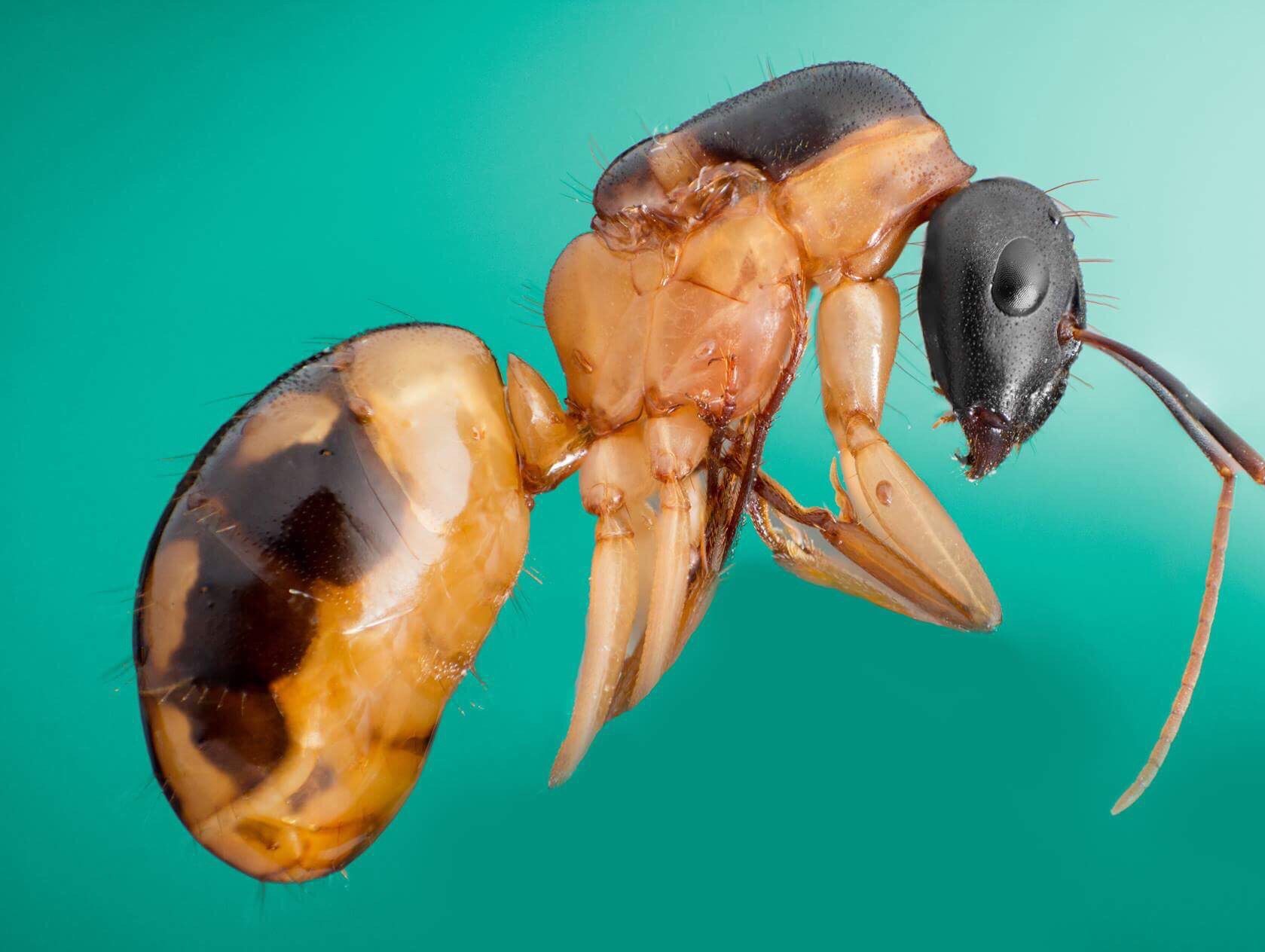 Ants live together in big colonies. The head of an ant colony is the queen ant. She is very well-guarded by the other ants because she is the most important ant in the whole colony. After all, she is the only ant that can produce more ants and ensure the survival of the colony.

As a whole, the queen ant will never come out of the nest. Once the queen has lost her wings after the nuptial flight she will start to produce offspring and establish her own colony. She will never come to the surface after that unless she is forced to.

The queen ants that are outside are young virgin queen ants, looking for a place for their new colony.

How to Get a Queen Ant

If you are looking for a queen ant to start your own ant colony there are three possible ways to proceed.

The easiest way to get a queen ant is to catch one right after the nuptial flight right before she starts her own colony. A queen can also be dug up from an established nest or a queen can simply be bought from another ant keeper or shop.

We also have a full guide on how to get an ant queen that you can read right here.

Dig Her Up in an Established Nest

You can go ahead and dig through an established ant colony. This method is not very promising but possible.

The queen ant is very well guarded and all the other ants in the nest will protect her. She is somewhere in the center of the nest and will not come out by herself, so you will have to dig until you find her. Even if you find her, the chances are pretty high that she is injured during the digging process.

After you remove the queen from her nest, the rest of the colony will eventually die, because the only ant with the ability to lay eggs and thereby keep the colony alive is the queen.

This method requires the right timing. At some point in the year, young virgin queen ants will leave the colony they were born into. The time of this mating flight can be different for different species and regions.

If you see swarms of flying ants outside, it’s time to start looking for your queen.

The queen will mate during her flight and then land and start looking for a place to start her new colony. This is the moment you can catch her.

It is also possible to buy a queen ant. You can find stores online, depending on the region you live in.

Make sure that the queen ant you buy is a regional ant. If for any reason you are not able to care for your ants anymore or don’t want them, you can just release them outside. That would not be possible with ants that are not native to your region.

How do I Get the Queen Ant to Come Out

If you need a queen ant for a new colony but you have missed the mating season with the nuptial flight, you might want to get a queen from an established nest.

As a whole, a queen ant will never come out of its nest voluntarily. The only way to get a queen out of an already established nest is to dig it out. But identifying the queen isn´t always easy and finding it this way is even harder.

Keep in mind that a queen will never leave the nest voluntarily and it would probably be easier to wait for the next nuptial flight or buy a queen ant.

If you want to get the queen ant to come out of her established colony, without killing her, the only way is to gently dig through an entire ant colony.

Can You Dig Up a Queen Ant

Yes, but it is really difficult because the other ants will do everything to hide and protect their queen. She is the center and heart of the colony. The workers can live without her queen but will die out within a few weeks or months. If no eggs are being produced, there are no new, young ants to take their places, and eventually, the entire colony will die.

Make sure to wear a proper outfit for this activity to prevent ants from crawling under your clothes. You should use a big shovel to reduce the chances of harming the queen ant.

Try not to destroy too many tunnels. Keep in mind, that the queen is somewhere down there and you don’t want to squish her.

Put the soil with the ants in big buckets and close them with a lid before you continue with the next bucket. Otherwise, the queen might escape.

After putting the entire ant colony in buckets, you can carefully go through the buckets. Use a spoon or something similar and follow tunnels when you find them. This procedure will take a while and you should obviously do that outside and not in your home.

The queen is the biggest ant of them and you can also recognize her by her huge abdomen compared to the workers, and if you look close enough, you might even see the wing marks on her body.

Can a Queen Ant Start a New Colony on its Own?

A queen ant is needed in order to start a new colony. She is the only one who is able to produce eggs that develop into new ants.

As a whole, a queen ant can start a new colony but only if she has mated with a male drone. One queen is enough to start a whole ant colony that will eventually be thousands of ants strong.

Not every queen ant can start a new colony.

The queen has to be fertilized by one or more male drones. Otherwise, she can not lay eggs.

During the mating flight, a queen “collects” enough ant sperm through the male drones for the rest of her life.

This can last up to 30 years, depending on the species.

Do You Need a Queen Ant For an Ant Farm

You don’t necessarily need a queen ant for an ant farm. The ant farm can work perfectly fine with only workers. Depending on the ant species, the ant farm will live as long as the ant workers live. This can be up to several months.

But eventually, the ants will die because there are no new, young ants to replace them. Only the queen can lay eggs that develop into new ants.

Depending on what you are planning to do, you can decide whether you want a queen ant or only workers.

With a queen ant, a colony can survive many years or even decades. If you only want a small project for a few months, you don’t need a queen ant, because the workers will do fine without a queen.

What Season do Queen Ants Come Out

The season for young virgin queen ants to leave their colony and take off for their mating flight depends on various circumstances.

Most ants wait for a warm and sunny day, preferably after a rainfall, to come out. The soil has to be humid enough for a freshly mated queen to dig through it in order to find a nice spot for her new colony.

Depending on the regional climate and type of ant, nuptial flights are possible all year long.

But most species will take off for their mating flight in spring, summer or early autumn.

Here is a list of some of the most common ants and their usual nuptial flight season.

Messor barbarus is the most common ant of this species. They fly between September and October.

There are many more ant species out there, and most of them fly between May and July. This is just a very small selection of popular ants.

If you want to dive deeper into the nuptial flight seasons, you should check out this page where ant lovers from all over the world insert their data on nuptial flights: antflights.com

What Time of Day is Best to Find Queen Ants

If you are looking for a queen ant, you can look any time of the day and even at night.

The best days are warm, sunny, and humid days with a light breeze, supporting the ants’ flight.

Some ants prefer flying in the morning, some in the afternoon, and some in the evening. And some just fly whenever the conditions are good.

Make sure to take tubes with you, if you are looking for a queen ant, and do not catch them if they are crawling around close to a nest. They might not have mated yet and you surely want a queen that can lay eggs.

Make sure that you have permission to collect ants. There might be legal regulations depending on the country or state.

How Can You Tell an Ant is a Queen

As a whole, a queen ant can be identified by its size and wing scars on her thorax. A queen is usually bigger and has a bigger thorax than worker ants and she has scars on her back where the wings broke off after her nuptial flight.

The queen ant is bigger than the other ants and has either its wings still on (rare) or wing scars on her thorax, where the wings broke off.

She also has a larger thorax (due to the wings) and a larger abdomen (for egg production).

How Big is a Queen Ant

The largest queen ant ever found is a Camponotus gigas or also called Dinomyrnex gigas. They can be up to 2 inches (= 5,08cm) long. Queen ants are usually a little bigger than their worker ants.

One of the smallest ant species is the yellow or light brown Monomorium pharaonis, also known as Pharaoh ant.