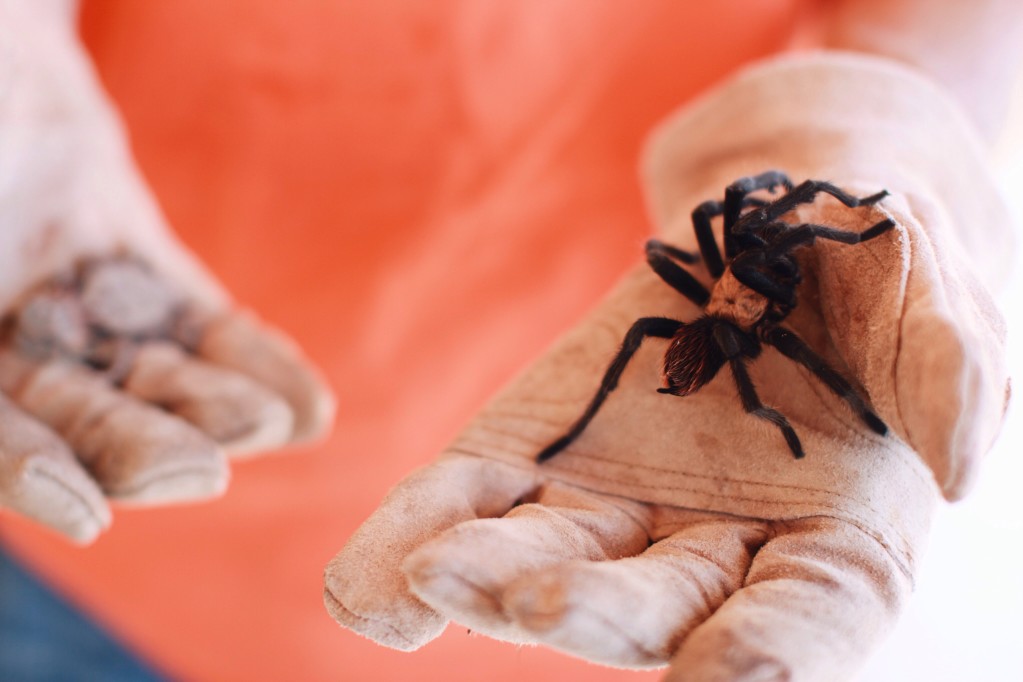 Tarantulas are quite different from other pets like dogs, cats, or hamsters not only visually but also because of their very different behavior. So how can you tell if your tarantulas like you and can they even recognize you?

You should not let a tarantula walk on your bare hand unless it has gotten used to you. I personally never let tarantulas walk on my bare hands because of their urticating hair that tarantulas kick off their abdomen if they feel threatened.

Tarantulas have very bad eyesight and while they can smell they don´t smell like we humans do. They smell via receptors on their hairs so they need to touch you in order to “smell” you.

This means that they have a very hard time recognizing a human in general.

On top of that, tarantulas don´t have a very well-developed social structure so even if they recognize you they won´t have any attachment to humans as we would.

Do Tarantulas Bond With Their Owners?

This is an often asked question especially from new tarantula owners but unfortunately, the answer is disappointing to most.

As a whole, tarantulas won´t bond with their owners as a dog or a guinea pig would. Tarantulas aren´t social creatures so they won´t have any feelings for their owner other than recognizing them as not being a thread. Tarantulas are great pets but they are not great for holding or cuddling.

So, unfortunately, tarantulas don´t bond with their owners. The best you can ever expect from a tarantula is that it recognizes you as someone who doesn´t hurt it.

So if a tarantula doesn´t kick off any urticating hairs when it is on your hand and doesn´t raise its front feet to warn you then you can assume that it has labeled you as not dangerous and that is the closest that you will get to bonding with your tarantula.

I think a lot of new tarantula pet owners like to have a tarantula as a pet because they imagine themselves holding it in their hands or letting it run over their arm. But is that really such a great idea?

As a whole, tarantulas don´t mind if they are being held but they absolutely don´t like it when they are picked up. And if the tarantula is not used to humans then it should not be held without protection. Tarantulas can kick off urticating hairs from their abdomen if they feel threatened which will irritate the skin.

I personally held quite a lot of tarantulas in my hands without any gloves protecting my skin but that was only because I knew that those tarantulas are used to humans and usually don´t perceive them as threats.

But if you have a new tarantula then don´t expect it to not feel threatened by you.