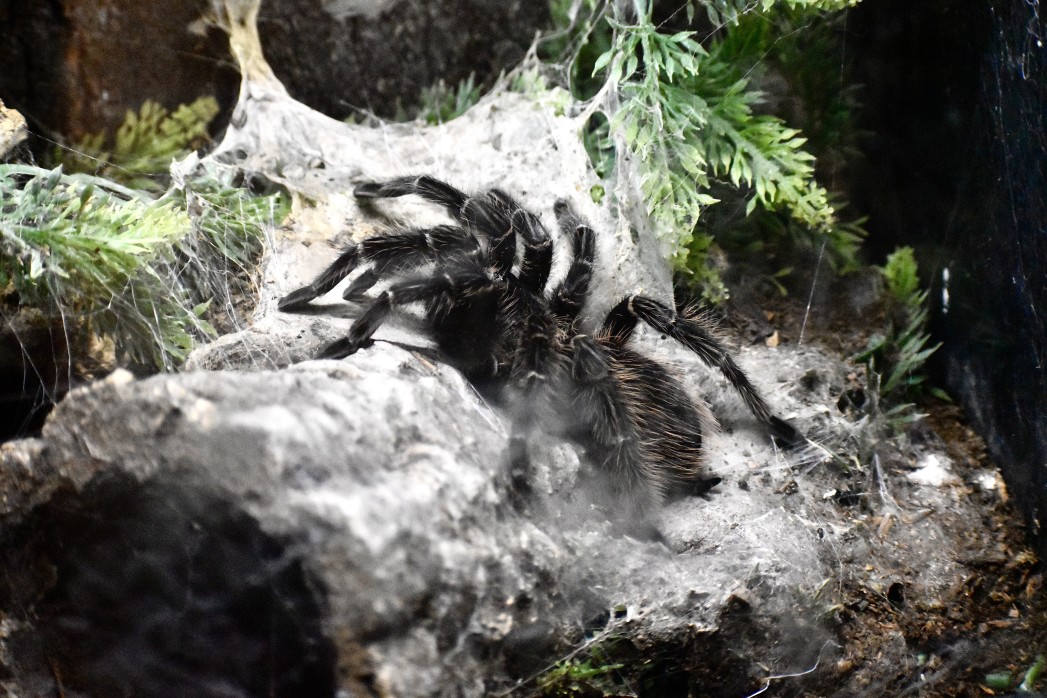 Tarantulas are one of the most frequently held pet spiders in the world. It is the number one pet spider in the US and Canada with the jumping spider in close second place. Most spiders hunt their prey by spinning a web but tarantulas are slightly different.

As a whole, tarantulas are able to spin webs but they don´t use their webbing to catch their prey. They will surround their burrow with webs to strengthen the walls and as a warning mechanism. When prey or a predator steps on a tarantula’s webbing then the tarantula will know.

Depending on the species a tarantula will make a lot of webs or very few webs.

Most tarantulas will only create a thin layer of webbing on the ground and on the inside of their burrow but some species will make webs all-around their burrow.

The two most held tarantula species in the US, the Mexican Red Knee and the Chilean Rose tarantula, both only create very few webs and only near and inside their burrow.

Tarantulas don´t make webs to catch prey, so don´t expect to see webs that you may be used t seeing from smaller spiders that hunt flying bugs.

A tarantulas web is more like cobwebs and often reminds more of fake Halloween decoration webs than actual spider webs.

Tarantulas don´t use their webs to hunt prey directly but they use them to sense disturbances. So if an insect steps on the cobweb then the tarantula can sense the movement.

You can actually test that by throwing a cricket near the webbing of a tarantula. Then observe what happens while it hasn´t touched the webbing and then observe how the spider reacts as soon as the cricket touches the web.

I already mentioned a tarantulas burrow or nest in this article but do they actually all burrow?

As a whole, baby tarantulas, so-called slings, often burrow themselves for safety and to protect themselves from the hot sun so that they don’t dehydrate. Adult spiders will also burrow but more rarely. They will often find a safe home behind some bark or in a half log.

It also depends on the species of tarantula. Almost all tarantula will seek out a hiding spot in which they sleep. This hiding spot can be anything from a piece of bark to a half log or even under a rock.

They will surround their safe spot or nest with webbing.

Young tarantulas, so-called slings, will burrow more often and way deeper than adult tarantulas because they are more vulnerable and thus seek out a more protected hiding spot than adult spiders.

That is also the reason why you should give younger spiders the chance to burrow in the first place by filling the cage with a lot of substrate.

Adult spiders don´t need as much substrate anymore but you should give adult tarantulas a lot of chances to hide. So put lots of rocks, bark, branches, and half logs in the cage. But also leave at least one small open area where they can come out and hunt.

If you see your tarantula buried deep under the substrate then don´t worry. Even though it does not seem like it the spider will be able to come out of its hole. Freeing it will only stress the poor thing.

So all that you can do is wait until it comes back up and if it doesn´t move at all for two whole days then you should worry and try to lure it out by putting some crickets on the surface. This will often lead to the tarantula coming out on its own.

Only free the tarantula if it is absolutely necessary!