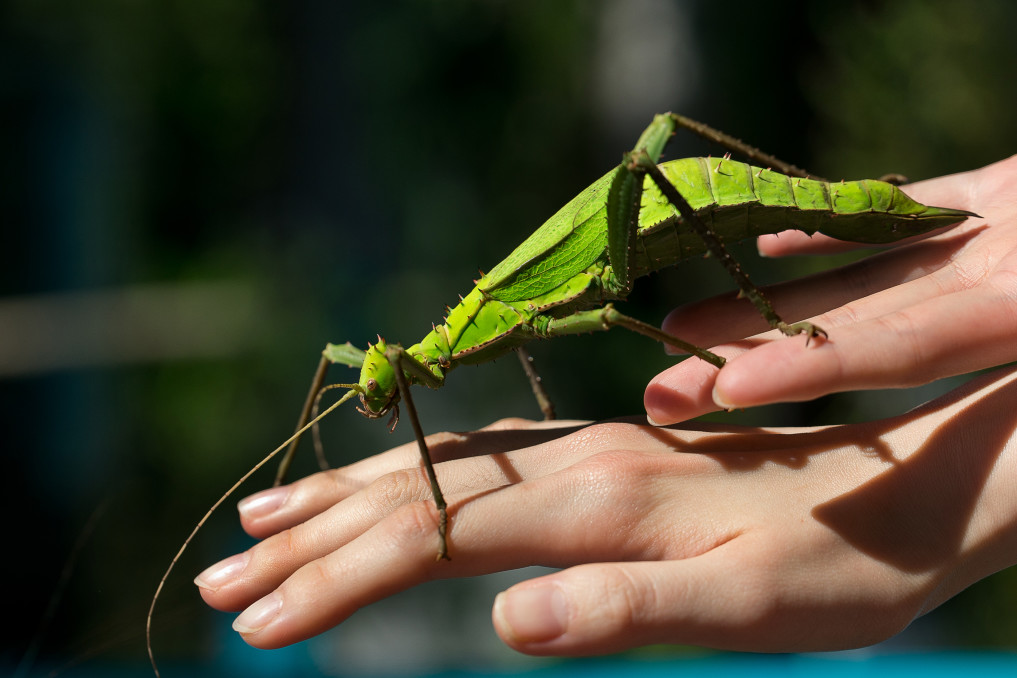 More and more people are interested in keeping insects as pets instead of the common pet species. Insects usually need less space than other animals, are less expensive, and can be kept by people who are allergic to animal hair. They can also make a great educational impact and are often held by schools.

As a whole, stick bugs make really good pets. They don’t smell, don’t make noise, don’t lose hair, are non-aggressive, and are easy to care for. They come with low costs and low maintenance and are very educational for both children and adults.

Stick bugs are really interesting insects that are masters of disguise. They are fascinating to watch and can easily be bred.

Phasmids are magnificent creatures that come in many different shapes, sizes, and colors.

Most of them were originally native in most tropical and subtropical regions all around the world, especially in south- and south-east Asia, including the surrounding islands.

Many different Phasmatodea species can also be found in Australia, North and South America, and Madagascar. And of course in many households of insect lovers, who keep these fascinating creatures as pets.

The name “Phasmatodea” or “Phasmids” comes from the old Greek word “phasma”, which can be translated with “ghost” or “phantom”. Phasmids are masters of disguise and appear just like ghosts, hence the name.

This categorization is only referring to the shapes of the Phasmids and has nothing to do with the real, scientific categorization.

There are more than 3,000 different stick bug species that mostly live in tropical and subtropical regions. Many of them can be kept as pets.

The largest of them all is the Chans Megastick (Phobaeticus chani). It can grow up to almost 13 inches including the legs which makes it not only the biggest walking stick but also the longest insect in the world.

Stick bugs are great pets to watch if you are the type of person who enjoys watching animals. You can handle stick insects, but they are not cuddly creatures that will go on a walk with you.

They are Low Maintenance and Easy to Care For

Compared to other pets, stick insects come with low maintenance. Depending on the species, they need fresh leaves every day, and regular misting of the enclosure with water.

The substrate was to be exchanged every now and then when you notice any mold.

Some species are rather big and need taller enclosures, while other species are tiny and can be kept in a jar with a mesh lid.

No matter how little space you have available for your pet, you will be able to find a stick bug that is small enough for you.

Most stick bugs don’t need extra heating or any fancy equipment in the enclosure. You can use a paper towel as a substrate on the floor, a glass or plastic jar as an enclosure, and some kind of mesh and rubber band as a lid.

For the decor, you can simply use a popsicle stick or some artificial plants that the stick bug can climb on. If you can find stick insects outdoors, you can collect them at no extra cost.

Before you do so, check out the local regulations on bug collecting and keeping.

Leaves can be collected outdoors as well, and in winter you can feed your pets lettuce.

No Hair, no Smell, no Noise

Yes, that’s right, stick bugs have no hair, they don’t smell, and they make no noise. They are perfect if you are looking for a calm, silent, easy-going pet, that requires only rare cleaning of the enclosure.

The majority of stick insects are completely non-aggressive. They are herbivorous and will gently walk around on your hand.

Some stick bugs mimic scorpions when they feel threatened and curl up their abdomen. While this gesture looks impressive, it is completely harmless.

Some stick bugs can spray a chemical when they feel threatened, and this chemical can cause a rash, but most stick bugs are just very calm and have no intentions to attack you.

Walking sticks live longer in captivity than they would in the wild. In captivity, you can offer your walking stick the perfect conditions for a long and healthy life without any predators.

Here are some examples of popular pet stick insects and their usual life expectancies.

The Medauroidea Extradentata (Annam Walking Stick) is a popular pet stick bug with a rather short life of up to 8 months.

Another popular pet walking stick is the Sipyloidea Sipylus (Pink Winged Stick Insect) is the perfect beginner stick bug and can live up to a year and in some cases even a bit longer.

The Heteropteryx Dilatata (Jungle Nymph) is one of the biggest stick insects. The females are huge compared to the males and they make great pets with impressive appearances. They can live up to 2 years.

The Aretaon Asperrimus (Thorny Stick Insect) is another popular pet stick bug. It usually lives about one year.

All these stick bugs can potentially live longer under the perfect conditions in a safe enclosure, but just like any other animal, the lifespan can differ from bug to bug.

The females usually live longer than the males. That makes sense because when males and females reach adulthood, they can reproduce.

After mating, the males are not needed any longer, while the females still have to lay the eggs.