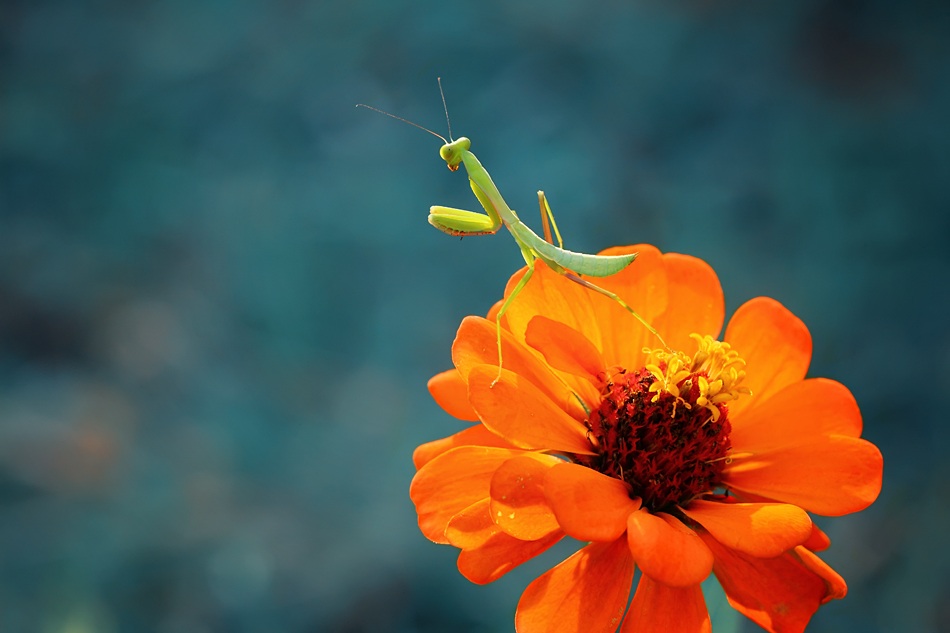 Praying mantis are amazing creatures, that are masters of camouflage. They can only be detected when you look close enough. Their appearance and movements make them disappear between plants and flowers.  They use their look and movements to camouflage between plants. For example, the ghost mantis uses a unique look and pretends to be a dead leaf, moving in a slight breeze.

As a whole, some praying mantis species live in the grass. The most popular species in the Western hemisphere are the Chinese mantis and the European mantis that can both be found in green and brownish color shades, which makes it easy for them to hide in grass, bushes, and trees.

Where can Praying Mantis be Found?

The majority of mantis species live in tropical areas. Currently, there are around 2300 discovered species, but new species can still be found.

As a whole, mantis can be found in the US, Southern Europe, Africa, Asia, and Australia. From the over 2300 different species known to men only two are widely spread in the US. These are the Chinese mantis and the European mantis.

Only very few species made their way into the rest of the world. Nowadays two species are widely spread in the US. These are the Chinese mantis and the European mantis.

Their appearance is an indication of where they usually live.

One of the prettiest species that were discovered so far is the orchid mantis, which looks like an orchid and this is exactly where it would hide in nature and where it can be found.

Other species are brown and look like sticks on trees. And that is where these species can be found.

If you are looking for a praying mantis, the best place to look is where a praying mantis feels safe and the chances are high that prey comes along. These spots can be high plants in which the praying mantis can easily camouflage in with a lot of insect traffic.

Praying mantis do not live in every country of the world. Some species are widely spread in the US, and some can be found in Southern Europe, Africa, Asia, and Australia. Even in Germany praying mantis was found in two different regions.

In some countries and states, some praying mantis species are protected by law, and catching or keeping them is being punished. You should check the local laws if you are planning to keep a praying mantis as a pet.

What Time of the Year do Praying Mantis Come Out?

The praying mantis does not come out before enough prey is also outside, otherwise, it would starve. The praying mantis season commonly starts around mid-February to march, depending on the region and the climate.

The female praying mantis lays eggs in autumn. In colder regions praying mantis die in winter and the season starts again with the eggs hatching in spring.

What does it Mean When You See a Praying Mantis in Your Yard?

The praying mantis might look terrifying to some but in a lot of cultures, it is considered a good omen to have one in the yard.

Seeing a praying mantis in the yard is considered a good omen for fortune and wealth in some cultures. This comes from the way they hold their claws in front of them which looks as if they are praying. But it can also be beneficial for the ecosystem of the yard to have a praying mantis because they catch and eat harmful insects.

In some cultures, the praying mantis is an omen for fortune and wealth.

Due to their appearance, they are believed to be a symbol of the Great Spirit. With their claws folded before the chest, they do look like they are praying.

Having praying mantis in the yard can be beneficial for the ecosystem. Mantis eat harmful insects and can thereby protect the harvest and plants.

Can you Keep a Praying Mantis as a Pet

It is possible to keep a praying mantis as a pet.

Species that are especially hardy and easy to keep are the Arizona Mantis, the Carolina Mantis, or the Chinese Mantis, as well as the Ghost Mantis.

Praying mantis have a life span of a few months up to a year. They make hardy, easy to care for, not dangerous, but definitively fascinating pets.

In some states, the praying mantis is protected by law and cannot be caught or held as a pet. In other regions, only the local mantis are allowed as pets. Check out the local regulations, before you get your praying mantis.

Can a Praying Mantis Hurt you?

Unless you are an insect praying mantis cannot hurt you. They are ruthless predators but since humans are too big to be a prey, there are very tame and not aggressive at all.

We have a full article about praying mantis and if they can hurt a human that you can read right here if you want to know more.

A praying mantis will not attack a human. Their claws and legs might feel sharp when they walk on your hand, but they will not bite or scratch you.

2 thoughts on “Do Praying Mantis Live in the Grass?”