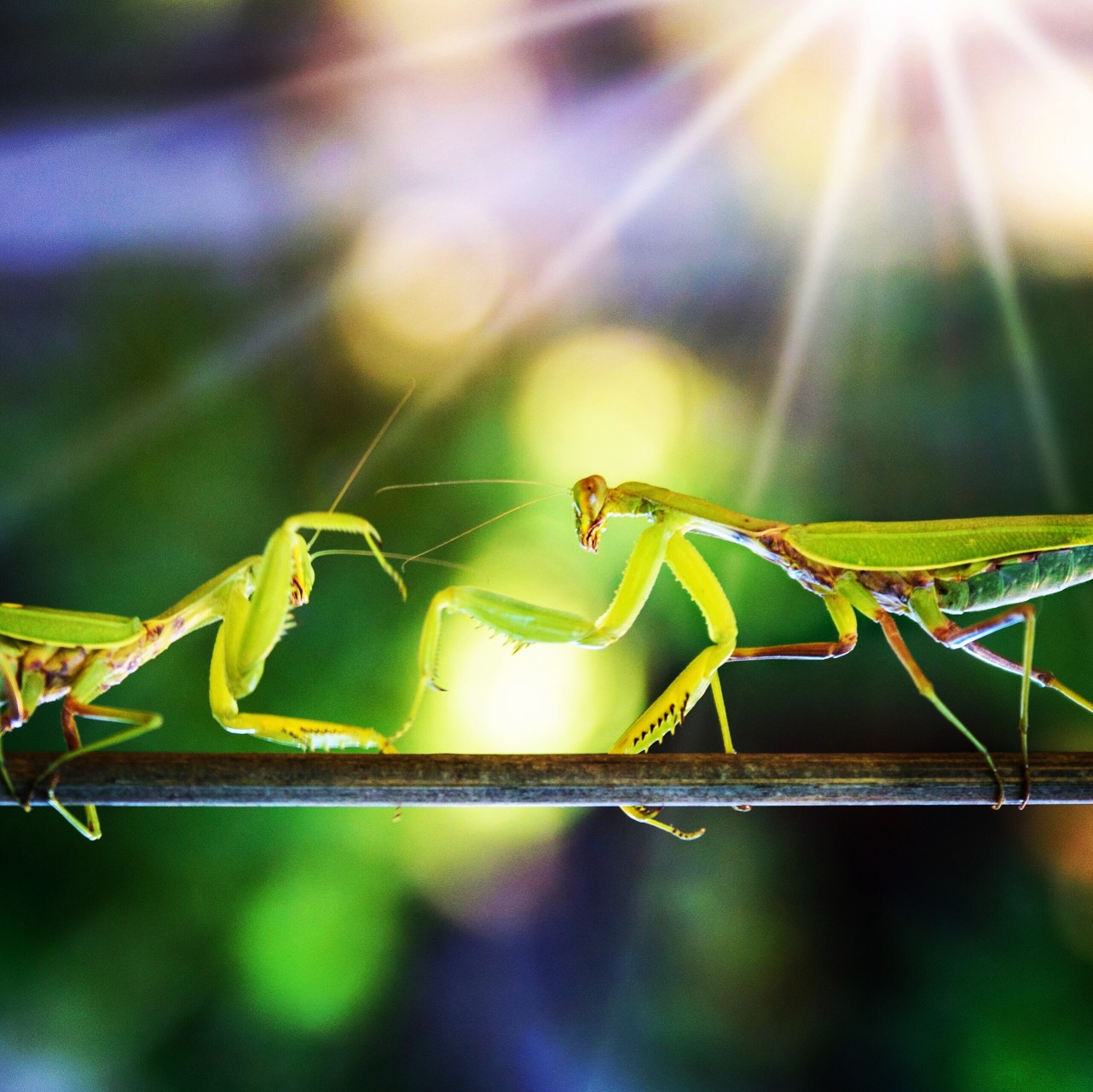 Autumn. It’s mating season for praying mantis in many parts of the world. In tropical regions, you can witness praying mantis mating all year long. During that time, male praying mantis flies around, searching for females. The ideal scenario for a male would be: When they come across a female praying mantis, they approach her, leap on her back and mate with her. And then escape being able to mate with other females. But it does not always go that way.

As a whole, praying mantis is known for being cannibalistic. They eat only meat and even feast on other praying mantis. Around 20% of the males are being killed and eaten by the females after mating. It depends not only on the species but also on the body conditions of the female.

Why do Praying Mantis Eat Their Mates?

Both male and female praying mantis have wings, but only males can use them to fly.

During mating season male praying mantis fly around and look for females, they can mate with. And before, during, or after the mating process, females sometimes feast on the males

But why do female praying mantis eat their mates?.

This scenario is possible but does not always occur.

In fact, studies have shown that in only around 20% of the cases, the female caught the male during or after mating and eat him.

In an evolutionary sense, sexual cannibalism benefits both the male and female mantis, even though it does not appear that way.

Scientists found out, that if the female eats the male, more of the male’s body is literally passed on to the female.

This does not only lead to around 25% more eggs than the average clutch, but the eggs of the female also contain more of the male-derived amino acids.

This means that more biological material from the male mantis was found in the eggs than in cases, in which the male was able to escape.

The amino acids are a valuable snack with lots of energy for the female. It is a logical decision of the female mantis to eat the male, in order to be able to produce as many eggs as possible.

In some cases, male praying mantis even offer themselves to the female as a source of protein when they are done mating.

An adult praying mantis, that is ready to mate has reached the last stage of its life and will die soon after either mating (male) or laying eggs (female) anyway.

Using the male as a source of energy after mating absolutely makes sense in an evolutionary way. If the male is eaten or not is 100% the choice of the female and highly depends on her body conditions and hunger.

Mating does not always end (or start) with the male being eaten. In only around 20% of the cases, the female decides to devour the male praying mantis.

That means, that around 80% of the male praying mantis get away after mating without being eaten. Whether the male is a snack for the female or not depends on her condition and hunger. The most important thing for the female is to lay as many eggs as possible, and if she needs more energy to be able to do so, the male is a good source of protein for her.

Not all praying mantis species are cannibalistic towards their mates. And even the ones that practice sexual cannibalism, meaning that the female would eat the male after mating, does not always end in the death of the male praying mantis.

In around 20% of the mating scenarios of praying mantis, the female eats the male, while in the other 80% of the cases, the male drops off from the back of the female and can go ahead and mate with another female.

Do Male Praying Mantis Know That They Will Die?

During the mating time, the male praying mantis approach the female praying mantis carefully and once they are done mating, they drop off the back of the female quickly and move away. This behavior is an indication that the male knows what could happen if he is not careful and quick. But it is unsure, if the male really knows, that he might be killed and eaten by the female after mating.

Yes, praying mantis are cannibalistic. They eat meat and besides insects, reptiles, amphibians, and small mammals, they also eat other praying mantis.

Not all species eat each other. The Ghost mantis seems to do ok with another ghost mantis in captivity and they do not kill each other, but all other species show cannibalistic behavior when they are put together.

Do Baby Mantis Eat Each Other?

Praying mantis eat meat and are cannibalistic. Many mantis species show very aggressive behavior towards each other. When mantis are held as pets, only ghost mantis can be kept in groups. All other species will kill and eat each other.

Baby mantises usually don’t start eating each other right away, when they hatch. But once they hatched for the first time and reach the life stage L2, they will show cannibalistic behavior, especially if there is nothing else good to eat.

If mantises are kept as pets, they must be separated in L2, otherwise, you will lose some of your mantises to cannibalism.

What Animals Eat Their Mates?

Cannibalism is not unusual among animals.

In the wild, it makes sense to use other creatures of the same species as a food source if food is scarce or if the other animal is too weak to survive.

Smaller mammals such as rabbits, mice, or hamsters eat their newborns if they are stressed out. In nature, stress could mean, that a predator is nearby.

It makes more sense for the mother-animal to eat her young or at least the weakest and gain energy or distract the predator instead of waiting for the predator to get them. Thereby she gives the rest of the young a better chance to survive.

In other cases, it is the other way round and the young eat their mother as the first source of energy before they start their lives. This gruesome practice results in a higher survival rate of the species and makes sense in the long run.

Some insects, such as the black widow or the praying mantis practice sexual cannibalism, which can result in a higher amount of eggs which will lead to a growth of the species in the long run.

Individual insects and animals won’t see the result during their lifetime, but their bodies are programmed by nature to behave that way in order to reproduce effectively.

Here is a selection of some animals, that are cannibals. Being cannibalistic does not mean, that they will necessarily kill and eat each other.

It means, that there is a possibility, that they show cannibalistic behavior if the situation requires it. The cause of cannibalism can be hunger, overpopulation, stress, predators, or cleaning the nest from weak or stillborn.