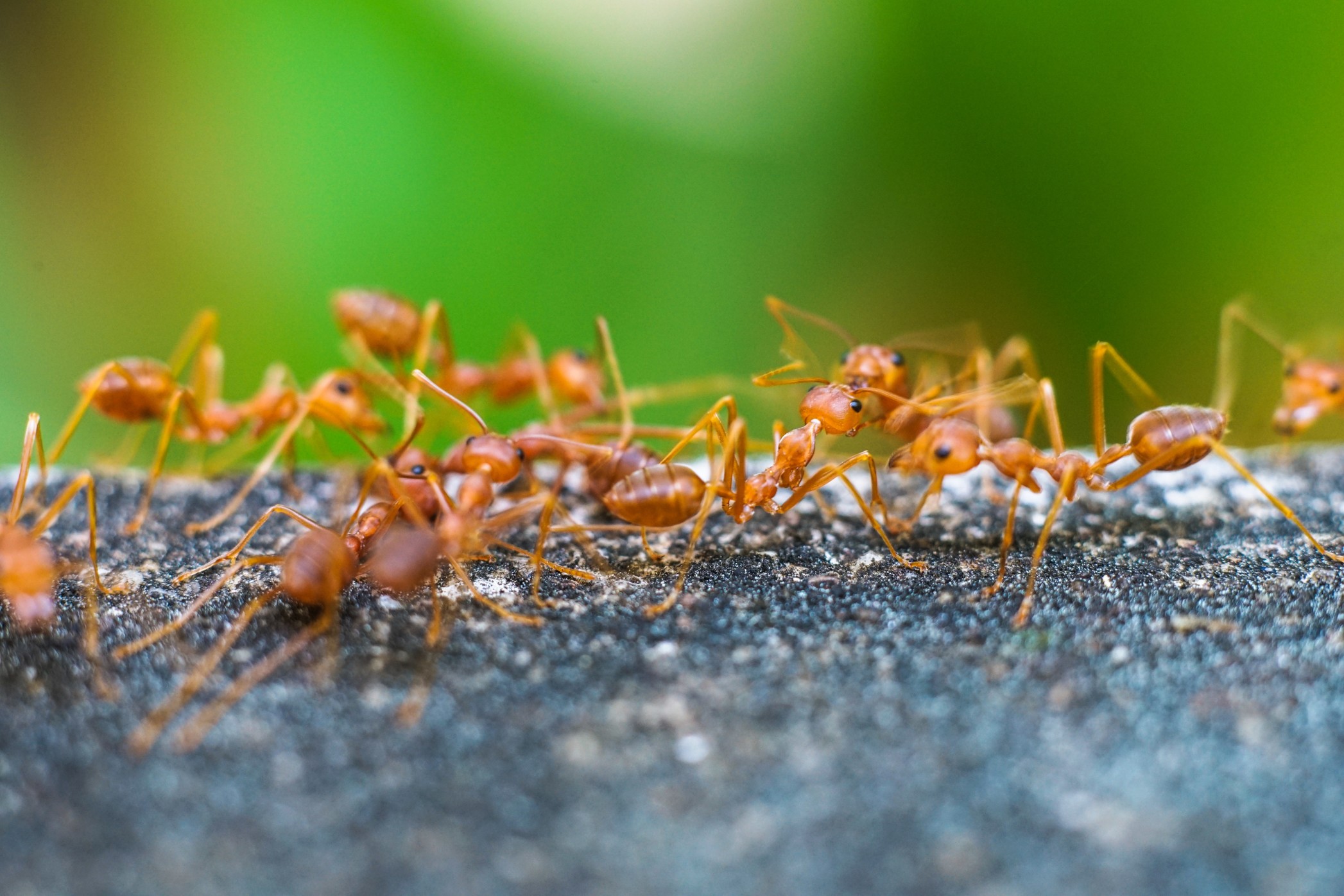 Fire ants have a reputation for being extremely aggressive and are known for their painful attacks. Even their name was derived from how it feels like if a fire ant stings you. The pain is similar to a burning match being pushed against the skin.

Every ant species can bite, but most ants are not strong enough to break the skin. Fire ants sting in addition to biting. Fire ants bite into the skin so that they cannot be shaken off by their victim and then they start stinging repeatedly while injecting venom into the skin which results in the burning paint.

Fire ants don’t like to be disturbed. If they feel like someone is too close to their nest, they will swarm out and attack the intruder.

How do Fire Ants Attack?

When fire ants attack, individual ants will release pheromones to give the other ants a sign to attack as well. This means that you rarely face one attacking fire ant but rather a whole bunch of them crawling towards you.

As a whole, fire ants will release pheromones that tell other fire ants to attack the victim. Then every fire ant in the vicinity will start attacking the victim by first biting the skin so that they can’t be shaken off easily. Then they will sting the victim repeatedly and inject painful venom.

They will first bite into the skin and use their jaws to stay in place for their next step in attacking: The stinging.

They will inject a venom called solenopsin into the skin, causing pain that feels like fire. Every fire ant will sting several times, making the attack even more brutal and painful.

By the way: The Latin name for the fire ant is Solenopsis.

The sting of the fire ant is not necessarily life-threatening but can cause some serious injuries that can lead to death in rare cases, sometimes due to allergic reactions.

Allergic reactions are more likely if the person was stung before. If symptoms such as difficulty in breathing, swallowing, nausea or dizziness appear, it is essential to quickly get emergency medical treatment.

If you are wondering if there are fire ants in your area then consider reading this guide where we tell you exactly where fire ants can be found in nature.

What Happens if You Get Bitten by a Fire Ant?

Fire ants attack by biting into the skin of their victim so that they cannot be shaken off, and start stinging continuously into the skin while injecting venom.

The sting feels like pushing a burning match against the skin, therefore the name “fire ant”.

The venom of the fire ant is called solenopsin and can have different effects on people.

Most people will experience itching and painful pimple-like bumps that will last up to 10 days. Others will react with swellings, some won’t react at all and some unfortunate people will have allergic reactions.

If reactions such as difficulty in breathing or swallowing, dizziness, uncontrollable shaking, or anything similar happen after a fire ant attack, medical assistance is necessary.

Do Fire Ants Bite for no Reason?

When a fire ant bites you, it has a reason, even if it is not apparent to you right away. Fire ants are highly aggressive little creatures. They won’t hesitate to attack if an intruder comes too close to their nest or near their food source.

The size of the victim is not important to them, since they can compensate for almost any size with their sheer mass.

The attack of fire ants feels like pushing a burning stick against the skin, hence the name “fire ant”. But the bite itself is not the painful part of the attack. Even though fire ants bite into the skin, the painful part comes when the fire ant curls up its abdomen and starts repeatedly stinging the skin while injecting its venom with every sting.

What Kind of Fire Ants are There?

Fire ants belong to the genus Solenopsis. This genus includes more than 200 species of which around 20 belong to the so-called fire ants.

In the US there are 6 species of fire ants. Four of them are endemic and two were imported from South America.

The endemic fire ants are:

The imported fire ants are:

They were imported from South America by accident in the early 1900s, leading to a huge population increase within just a few years especially in the south of the US but also in parts of Europe, Africa, some parts of Asia, Russia, and Australia.

In Australia, the red fire ant is fought and almost eradicated.

Eradication programs in the US were not successful as the imported fire ants are true survivors.

They multiply extremely fast and show very aggressive behavior towards any kind of intruders. Due to the lack of natural predators they can spread insanely quickly.

The red fire ant has become quite a problem for the ecosystem. They spread quickly, eat everything on their way and even eliminate other domestic fire ant colonies.

Within only a few years, some of the domestic fire ant species were completely replaced by the red fire ant in several regions.

How Many Fire Ant Species are There

The species group of Solenopsis ants includes more than 200 species. Most of them are not the so-called “fire ants” and are unable to sting.

The real fire ants include around 20 different species of the Solenopsis group.

These are the most common and well-known fire ants:

What do Fire Ants Eat?

Fire ants prefer sweet, soft, and moist food and need carbs and protein to survive. They are not very picky concerning their food and eat basically everything that comes in their way including other insects, ants, plants, and more.

We have a full article including a list of what fire ants eat and a recipe for fire ant food that you can read right here.

It is fascinating to see that fire ants do not hesitate to attack predators that are much bigger than they are, such as grasshoppers, worms, or even mammals.

Their diet plan includes plants, insects of all kinds such as scorpions and spiders, worms, reptiles, freshly hatched birds, dead animals of all sizes, and mammals.

Once they get their jaws on their victims, they will overrun them with hundreds or even thousands of fire ants, bite them and start stinging them.

The sting injects venom into their prey, paralyzing and killing it. This method enables fire ants to take on much bigger creatures than they are.

Besides the fact that fire ants can inject venom that can potentially kill a human, they also do some more crazy and impressive things to protect themselves.

Fire ants are real survivors. Normally ants cannot survive very cold temperatures but scientists found out that the fire ant would even survive temperatures below 10° F (-12° C) for two weeks before they finally died.

Flooding is also not an issue for a fire ant colony. They will hold on to each other, forming a floating nest, and will wait until they reach dry land again.