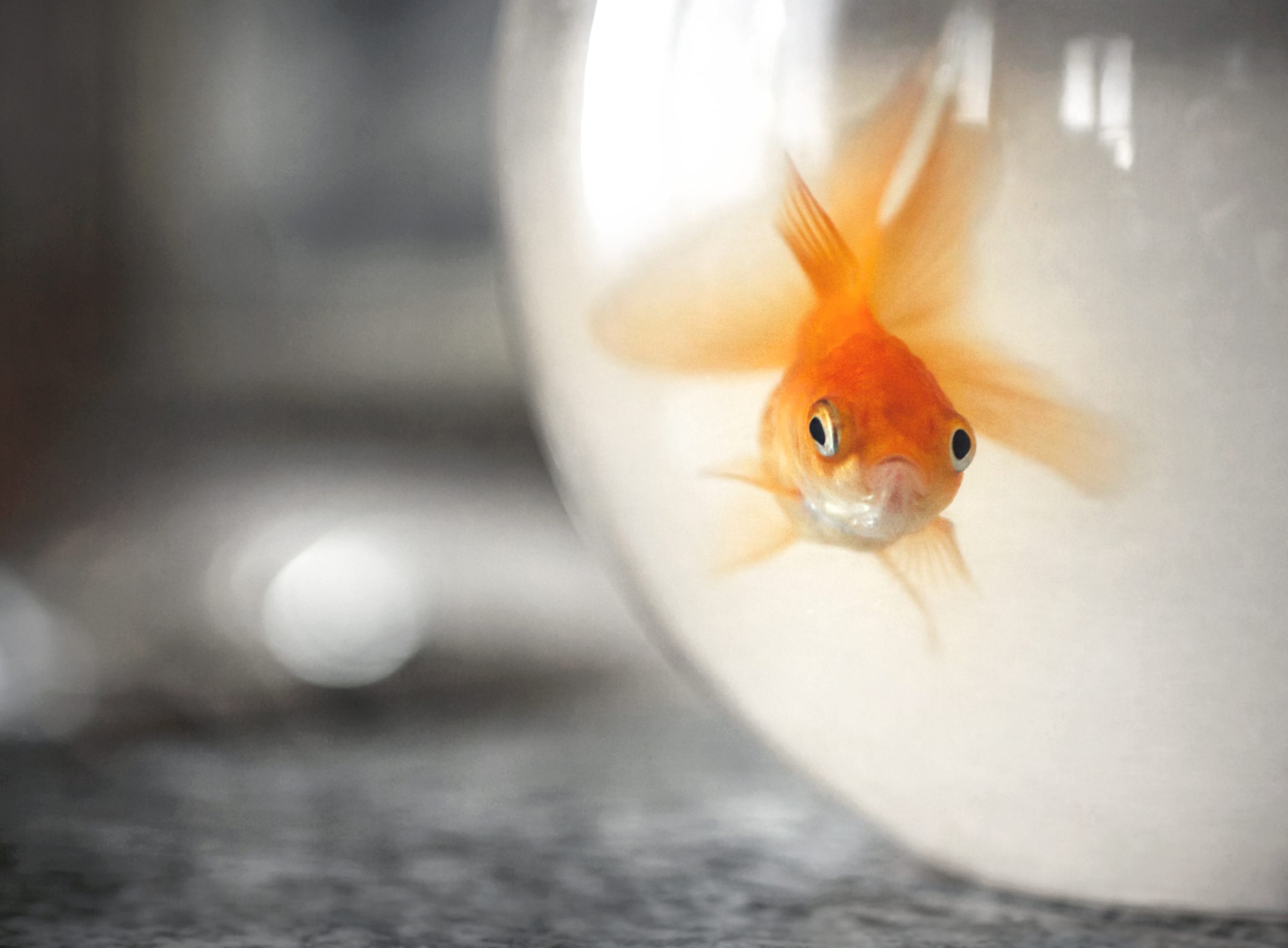 When you think of a pet fish, one of the first fish that pops into the mind is probably the goldfish. The goldfish is a very common and popular fish all around the world. With more than 200 different goldfish types, you can choose from many different shapes and colors.

As a whole, a goldfish could theoretically stay alive in a bowl, but it is highly recommended to give a goldfish a better home. One single goldfish needs a fish tank of 20-30 gallons of water to thrive. A regular bowl contains less than 6 gallons. The lack of space will kill a goldfish eventually.

It is super easy to get a goldfish. They don’t cost much and sometimes they are even given away as prizes.

But once you have a goldfish, you also need a fish tank. Or could a goldfish also just live in a bowl?

Why is a Bowl Not a Good Home for a Goldfish?

We see goldfish everywhere. They are cute, they are tiny, and in most movies, they live in a bowl. And they seem to be pretty happy in that bowl, right?

Unfortunately, the image of a happy goldfish in a bowl is simply not true. Goldfish need space and clean water to be happy and thrive.

But very often, goldfish are not treated well, which leads to an agonizing life and a short lifespan. When a goldfish is treated properly, it can become 25 years old and in some cases even older. The oldest goldfish in the world became 43 years old!

But why can a goldfish not be happy in a bowl?

Goldfish need more space. They look small and cute in the pet store, but you are looking at baby goldfish.

They will grow if you let them. Some types will grow up to 12 inches in length. Imagine a 12 inches long goldfish in a bowl!

And despite some rumors, goldfish are not stupid. In fact, they are pretty smart and can recognize faces and learn tricks. They will get bored in a bowl.

The tiny, cute little fish can produce a lot of fish poop. And that poop contains chemicals that can harm your pet.

The smaller the tank, the more dangerous it can get for the goldfish because they need a lot of water to process their waste.

And even in a big fish tank, you need to regularly check the water quality and clean the water at least once a week to make sure that the water is not poisonous for your pet. The bigger the tank, the easier the cleaning.

How Big Should the Fish Tank be for a Goldfish?

Don’t worry, your tiny little goldfish won’t get lost in that huge fish tank. In fact, depending on the species, goldfish can become up to 12 inches long. The goldfish you can buy in stores are just babies. With a bigger fish tank, you are on the safe side and your goldfish won’t outgrow his tank.

A fish tank for one single goldfish should contain a minimum of 20-30 gallons of water and an additional 10 gal per extra goldfish that you put in the tank.

Yes, that’s right, that’s a lot of space for your pet, and he will be so grateful that you treat him right.

Goldfish need a lot of oxygen. To increase the oxygen level in your fish tank, it is better to choose a longer / wider fish tank than a taller one.

Yes, that’s right, goldfish need to breathe. They don’t breathe like you and me, but they still need oxygen in their tank.

A bigger fish tank provides more oxygen for your pet. What’s important is the size of the surface. Therefore you would rather choose a long and wide fish tank instead of a high one.

You can add extra bubblers (airstones) or similar products to further increase the oxygen level of your goldfish.

When a goldfish eats something, it will (almost immediately) poop. That is normal, but just like us humans, goldfish do not want to swim in their own poop. In fact, the poop of a goldfish contains some dangerous toxins.

The most harmful one is ammonia. When goldfish live in nature, there are a lot of (good) bacteria in the water, that break down the ammonia into less harmful chemicals. But that particular bacteria do not exist in a bowl.

If you haven’t bought your goldfish yet, you can offer your goldfish a good home by preparing the perfect environment in advance. This can take several weeks, but it’s worth the effort. Your goldfish will thank you.

In order to break down ammonia, you need the right bacteria in your tank. You can start by removing chlorine from the water in your tank with a special conditioner. The chlorine is not good for the bacteria you need.

Now the bacteria have a safe space to grow. You can introduce commercially sold bacteria cultures and put some fish food in the tank. This will release some ammonia and the bacteria can break it down and grow.

You can regularly check your water with professional kits to see if the parameters are already good for your goldfish.

If you already have your goldfish in your fish tank, you will have to clean the water regularly. A 50-60% water exchange once a week is not unusual. Always check the water conditions to keep your goldfish safe and sound.

We all like a good spa day with some time in a whirlpool. But you goldfish prefer rather chilly water temperature. They need temperatures lower than 75° F (24° C). The ideal temperature is between 66 and 74 ° F. They can rather tolerate cooler water than warmer water.

Always check your water temperature to make sure your goldfish is as happy and relaxed as you are in a whirlpool.

What Does a Goldfish Tank Need?

The ideal goldfish tank for two happy goldfish contains 30-40 gallons of clean, well-filtered water. The water should be tested frequently to keep ammonia levels down and oxygen levels up. A good ammonia level would be between 0 and 0.25 ppm.

It is best to use live bio cultures for good bacteria growth in order to break down the fish poop.

The pH level shows how acidic or alkaline your water is. That level should be between 7.4 and 7.9 for your goldfish. 7.0 means neutral.

You goldfish need light, just like we do. You can have the lights for your aquarium on for 6-8 hours.

There are no sharp things such as stones with sharp edges or artificial plants with metal or sharp plastic strings to avoid accidents. Sharp things can cause serious damage, especially to the fancy goldfish.

They might hurt their long fins or even their eyes.

What is the Life Span of a Goldfish?

Depending on the type of goldfish, the life span can vary between 5 and 25 years. There are even some species that can live longer. The oldest goldfish was 43 years old.