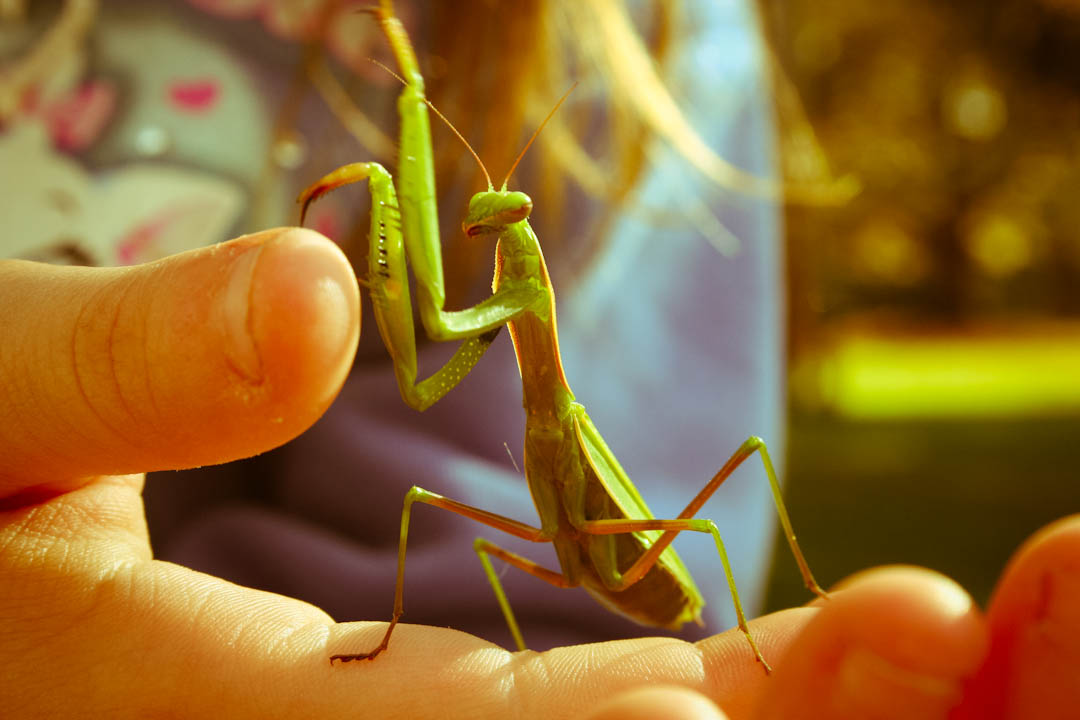 As a whole, praying mantis have the ability to recognize humans as potential predators due to their size. Humans are too big to be prey. A praying mantis that is kept as a pet is able to get used to humans and recognize them as harmless creatures and show no signs of fear or caution anymore.

But how is this possible? Are praying mantis extremely intelligent creatures that can stare right into your soul? Are they even able to recognize their owner, and learn tricks as other pets could? Is it possible to be friends with a pet praying mantis? You will find all the answers to these questions in this article.

How Intelligent are Praying Mantis?

The intelligence of an insect cannot be easily measured. But it is obvious, that the praying mantis is something special and does not seem dull at all.

As a whole, the praying mantis has the ability to see pretty well, recognize all sorts of things, and can learn new behaviors through conditioning. A praying mantis can learn tricks such as flying or walking towards its owner and quickly learn that humans are harmless when it is held as a pet.

Praying mantises are masters of camouflaging and of survival. They can use their 3D vision to capture prey, avoid predators and estimate distances.

They can recognize movements all around them thanks to their huge eyes. Once you own a praying mantis, you will see how quickly it adapts its behavior towards you.

It will learn that you are not an enemy and might even seek out company and stay on your hand for a while.

It is hard to compare the intelligence of different insects. Some people claim that ants and bees are smarter than praying mantises, but who could judge that on which criteria?

Praying mantis are definitively smart and fascinating insects, with some really cool features.

Can Praying Mantis Recognize Their Owner?

A praying mantis has the unique feature of seeing three-dimensional. In fact, the praying mantis is the only insect we know of, that has this ability. Other than flies, bees, or other insects that simply mind their own business, praying mantises seem to be observing their entire environment, including all humans nearby.

Their 3D vision gives mantises the ability to see pretty well. The pupil we seem to see is in fact not a real pupil.

It is simply a spot that absorbs all wavelengths of light and therefore looks black to us. The praying mantis is able to see with the entire eye.

A praying mantis which is held as a pet becomes more and more tame and friendly towards humans and especially towards its owner.

Why do Praying Mantis Look at You?

As a whole, the praying mantis is always watching the surroundings to see prey or predators. If a praying mantis is looking directly towards a human, it might be trying to find out if the human is dangerous or not. Mantises can see with their entire eye, not only with the black spot in the middle.

Praying mantises can see much better than most insects. They have a 3D vision and can track any movements and focus on objects from different distances.

When a praying mantis keeps staring at you, it could be figuring out, if you are a predator, or it might simply be looking around and you happen to be in the picture.

The black dot in the middle of the eye is not a real pupil. Mantises can see with the entire eye and the black spot appears to be a pupil for us humans but in fact, it is just a spot that reflects all wavelengths of light and therefore appears to be so dark.

How do You Befriend a Praying Mantis?

Praying mantises are smart insects that learn quickly. It is possible to teach a praying mantis, that humans are not predators and it does not have to be scared by a human hand.

It is possible to befriend a praying mantis by treating it nicely. If the mantis is kept as a pet, regular feeding, misting, and letting it walk on the hand will teach the mantis that humans do no harm.

Move slowly and never grab it. A praying mantis is a fragile insect that can be hurt easily. If you feed the mantis from your hand and let it walk on your hand and arm, it will quickly learn that you are a friend and not an enemy.

The praying mantis is the only insect, that actively interacts with humans. It walks on the palm voluntarily and stays there, even if it could walk or fly away.

As a whole, praying mantis are very friendly towards humans and voluntarily stop on the hand and walk around on humans. It is not possible to ask a mantis if it likes to be held, but it does not dislike it. As long as it is held carefully and gently, the mantis will stay with the human.

Praying mantises interact with humans, they slowly move around on your hand and will stay there and chill for a while. They appear relaxed and calm. As long as you don’t grab the mantis, it will be happy.

If you want to persuade a mantis to walk on your hand, you can carefully put your hand close to the mantis or directly under the mantis. It will slowly start walking on your hand.

How Fragile are Praying Mantis?

Praying mantises are fragile insects that should never be grabbed. A mantis can easily lose a limb or even die during molting.

Directly after the molt, a praying mantis has very soft skin and is extremely vulnerable. During that time, a prey can quickly become a predator.