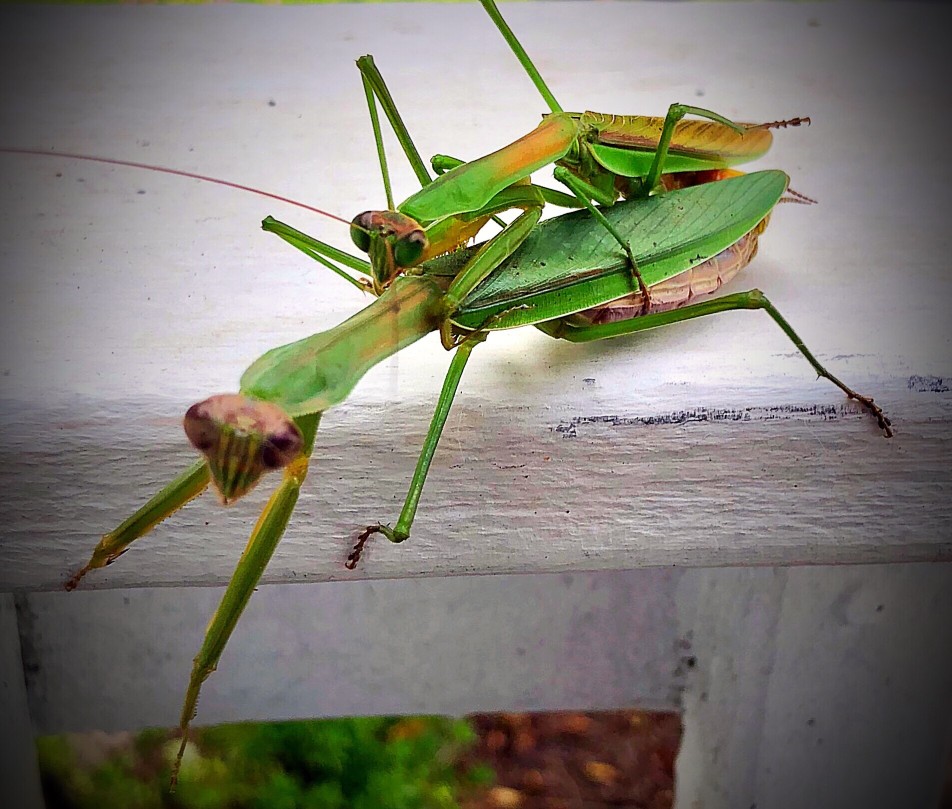 Female praying mantis lay their eggs in late summer and autumn. The eggs of the praying mantis are protected by foam that the praying mantis produces. This egg case is called ootheca and will be stuck to branches, twigs, and other objects that appear trustworthy for the female. The ootheca will stay there until spring, when temperatures rise and the nymphs hatch.

As a whole, female praying mantis can lay eggs with and without mating. In fact, the female produces eggs before she even attracts a male. For the majority of praying mantis species, only the eggs that are fertilized can develop into baby praying mantis while the unfertilized eggs will not develop.

How Does a Praying Mantis Reproduce?

The vast majority of praying mantis species have to mate to be able to reproduce. The reproduction process is similar to those of many other insects, but with one major exception: Praying mantis are widely known for sexual cannibalism.

But let’s not get too carried away from the actual topic. This is how praying mantis reproduce.

As a whole, praying mantis reproduce after reaching adulthood. The female attracts the male with pheromones and the male tries to approach to mate. The male climbs on the female’s back and attaches his abdomen to hers to transfer the sperm. After that, the female can lay fertilized eggs.

Once the female praying mantis has successfully accomplished her final molt, she has now officially reached adulthood and is ready to reproduce.

To be able to mate, the female obviously needs another male praying mantis, which has also molted into his final appearance.

If you want to know how to take care of mantis eggs then consider reading this article where we explain exactly that in great detail.

The Differences Between Male and Female Praying Mantis

In this last stage of their life cycle, both male and female mantis have wings on their backs. The older a praying mantis is, the easier it is to differentiate between males and females.

And after the last molt, it becomes quite obvious. The male is much slimmer and very often smaller than the female.

The reason behind the wing differences is, that the male actually gets to use his wings while the females of most praying mantis species cannot fly and rather jump or crawl.

The abdomen of the female is way bigger because she produces the eggs, and the wings are not strong enough to carry her weight.

The Mating Process of a Praying Mantis

When the female is mature and ready to mate, she starts producing eggs and foam in her abdomen. The foam will be used as a coat around the eggs to protect them. She will thereby form an egg case, which is called an ootheca.

To be able to lay fertilized eggs, the female needs help from a male mantis. She sends out pheromones into the air to attract males. When males are mature, they will fly around, sensing for females that are willing to mate.

Once a male praying mantis senses the pheromones of a female, he slowly approaches her. He has to be very careful and make sure that he is not being mistaken for prey. In some cases, the female rather catches and eats the male before he gets the chance to mate.

When the male successfully approached the female, he tries to climb on the female’s back and attaches his tip of the abdomen to her abdomen. The male will now pump his sperm into the female abdomen to fertilize the eggs.

This entire process can be done very quickly, but can also take several hours.

Once the male is done, he will try to escape, as the female might try to catch him as a snack. His duty is done and the female does not need him anymore.

We have another article where we explain when and why the mantis eats its mate.

How Does the Praying Mantis Lay Eggs?

A female praying mantis has already started to produce the eggs and the foam to protect the eggs in her abdomen before mating.

When a male successfully mated with the female, she lays the fertilized eggs with the protective foam, creating an egg case. The foam around the eggs is soft, when it’s fresh, but dries and hardens quickly, once it is outside.

If no male approaches the female, or if the mating is not successful, the female has to lay the eggs and coat them with foam anyways. She keeps producing eggs and foam and has to make room in her abdomen for the new eggs and foam.

If the female does not mate, the eggs will be infertile. From the outside it is impossible to tell, if an ootheca (= the egg case) contains fertile eggs or not.

While laying the eggs, the female uses the foam to attach the ootheca to a branch, twig, or any other object that seems safe enough for her eggs.

The goal of the praying mantis is to hide the ootheca from predators and make sure that weather conditions won’t affect the eggs. The ootheca can be attached to a branch in a tree or a twig in a bush. You can find oothecae on fences, walls, or any other object, that seemed safe for the female. They are usually well hidden or camouflaged which makes it hard to find them.

From a distance, you probably won´t be able to distinguish the eggs from the surrounding area and that is entirely on purpose.

If you are searching for mantis eggs the best approach is to carefully look around if you can see any round shape that looks like an oddly shaped leaf.

Can a Praying Mantis Make Babies Without Mating?

There are very few exceptions to this rule. A very small number of praying mantis are capable of parthenogenetic reproduction. That means that they can reproduce without mating.

One of these exceptions is the Brunneria Borealis, commonly known as Brunner’s stick mantis or Northern grass mantis.

This species only reproduces through parthenogenetic and no males are known in this species (since they are not needed for reproduction).