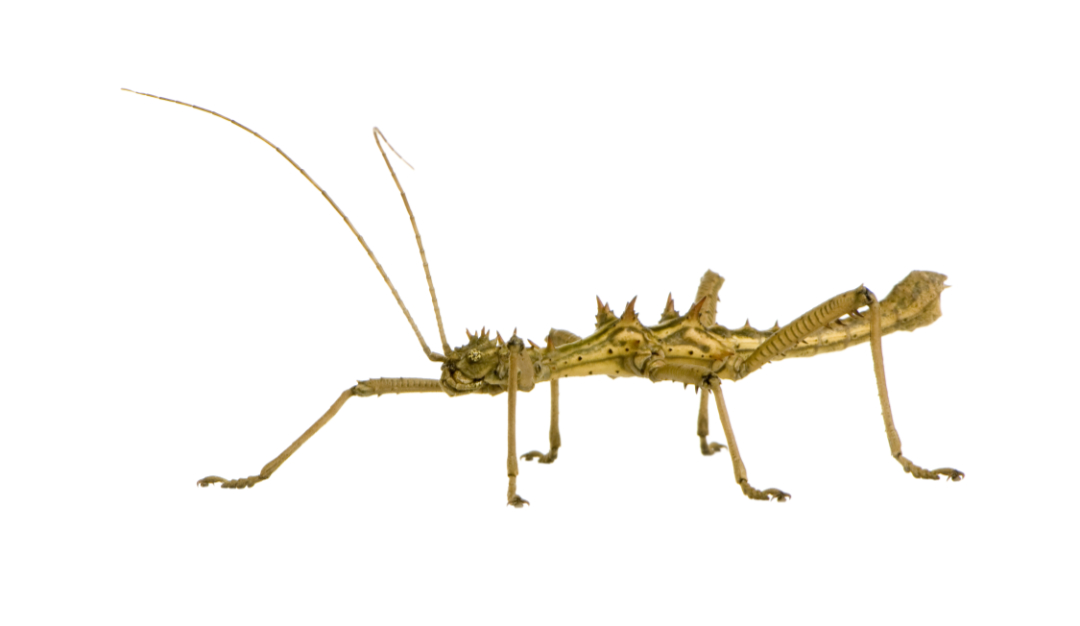 The Aretaon Asperrimus is native to Malaysia and is a nocturnal and wingless insect. This species has a special appearance and looks different than the “typical” walking stick. The males and females are dark brown colored with a yellowish pattern on the back, and many thorns all over the body.

The insects of this species camouflage themselves on or behind tree bark.

These herbivores are polyphagous and can be fed with leaves of bramble, oak, raspberry, ivy, pyracantha, and many more.

If you own Aretaon Asperrimus you can offer them a variety of different leaves. When you collect leaves outdoors, make sure that no pesticides were used in that area. Your pets will only eat what’s good for them and leave the rest untouched. Remove the unwanted leaves before they mold or dry out.

The height of the cage should be at least 9.5 inches (approx. 24 cm). Just like all stick insect species, the Aretaon Asperrimus will hang upside down to molt and needs enough space to crawl out of the old skin.

This species needs a lot of humidity, therefore the enclosure should have at least two walls or more made of plastic or glass to retain the humidity.

The enclosure should be located in a warm room with natural sunlight but the cage should not be in a place with direct sunlight. Sunlight can heat the enclosure up really quickly and you don’t want to roast your pets.

This species thrives at normal room temperature. At night, the temperatures can be a bit lower than during the day, but should not be lower than 65° F.

The Aretaon Asperrimus needs rather high humidity. It is important to mist the enclosure regularly. Real plants can also help to raise the humidity, as well as a good substrate that can retain and slowly release moisture.

The females of this species are usually around 3.2 inches big, while the males are slightly smaller with 2.2 inches. Both sexes are wingless and have striking thorns. These thorns are dark and reddish-brown and with black peaks. The thorns are over the entire body. Even the legs are spiky.

They have a rather eye-catching appearance but can camouflage themselves perfectly on bark or any twigs with stikes.

Their eyes are dark brown with yellow sprinkles.

Some Aretaon Asperrimus have a lighter, rather beige coloring. The colors can change during their lives and especially older females tend to become lighter.

The females of this species have a lifespan of approximately one year, while the males have a life expectancy of about 8 months on average.

The Aretaon Asperrimus reproduces only sexually. Both sexes exist and they have to mate in order to produce eggs that can hatch. The mating process can take several days. During and even after mating the male often stays on the back of the female and she will carry him around.

After the last molt, females are adults and are able to reproduce. After four to five weeks of maturity, the females will start to lay up to two eggs per day.

If you are planning to breed, you should use a good substrate on the floor of the cage, to give the female the chance to lay her eggs on the ground. The substrate should be around 2 inches thick.

You can put the eggs into an incubator, but you can also leave them in the enclosure and let them develop and hatch there. Both are possible.

The Aretaon Asperrimus is a rather easy species to care for and make good beginner pets. They might appear dangerous but they are harmless and completely non-aggressive towards humans.