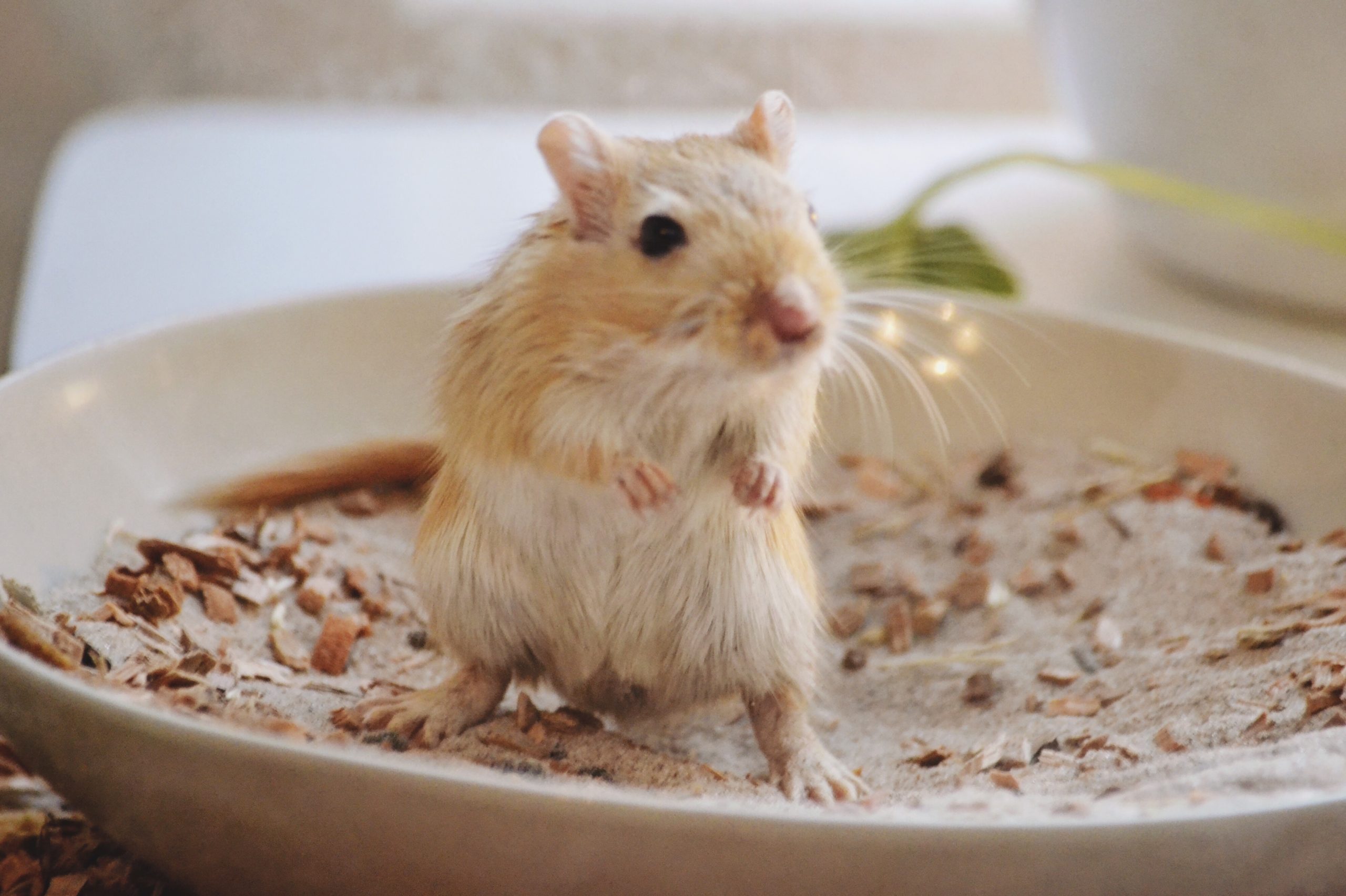 Every living creature needs to sleep. Many prey animals such as hedgehogs, mice, rats, as well as their predators such as owls, foxes, or lynxes are nocturnal animals and tend to sleep during the day. It is rather rare to see one of these animals during the day. Other animals, such as squirrels, most birds, butterflies, and many birds are diurnal and are most active during the day. And the crepuscular animals, such as dears, martens, cats, and many others are most active in the early morning and last evening.

As a whole, gerbils are not nocturnal. Gerbils are most active during the morning and evening hours, which makes them crepuscular animals. But in fact, gerbils are asleep and awake alternately in cycles of two to four hours respectively throughout the day and night.

Out of all the gerbils’ species, the Mongolian Gerbils are the most common pets. They are highly sociable creatures and never live alone.

Just like many other pets, gerbils tend to adapt to the sleeping habits of their owners. That means that even though they are crepuscular by nature, and asleep and awake in cycles of several hours throughout the day and night, they will tend to be awake more hours during the day if you are around a lot.

Especially if the gerbils’ cage is in a room where a lot of activity takes place, and there is always someone around during the day, they will start to become more and more active during the day.

Gerbils are very active and energetic animals. When they are asleep, you won’t hear a sound. But when they are awake, you will see them playing, jumping and running around, building tunnels, and searching for food.

They don’t make loud noises, but you will hear them rustling through the bedding throughout the day and also at night.

In the following, you will find information on the sleeping pattern of gerbils, their activities, and how and where they sleep.

Are Gerbils More Active at Night?

Even though gerbils in the wild are most active in the twilight and dawn, they are also active during the rest of the day and also at night.

Gerbils in the wild are active day and night, but pet gerbils tend to be awake more often and longer during the day to be able to interact more with their owners.

They get used to being fed during the day and learn that most activities such as playing with the owner, cleaning the sand bath, receiving new toys, and of course receiving treats only take place during the day.

This is enough motivation for gerbils to slowly adapt their sleeping patterns. But they will still sleep and be awake for several hours during the day, as well as during the night.

Are Gerbils Quiet at Night?

Gerbils do not make a difference between their day and nighttime routines. When they are awake, they will use their time to eat, chew on stuff, build tunnels, run around, exercise, play, and chase each other.

As a whole, gerbils are not quiet at night. They are not loud animals in general, but you will hear them rustling through the bedding, nibbling on food, squeaking, exercising, and chasing each other at night.

If your gerbils get a lot of exercise during the day, you might be lucky and your gerbils sleep all night long. Before you go to bed, you can let your gerbils run free in a closed room, give them paper towels and cardboard to shred, give them wooden toys to chew on and play with them in order to get them tired.

Unfortunately, every gerbil is different and even if your gerbils are exhausted after a fun workout, they might still wake up a few hours later.

If you tend to wake up easily, it might be better to reposition the cage into the living room or sleep with earplugs. You can also try to make everything in the cage less noisy.

You can acquire a silent exercise wheel, give them bedding that makes less noise while they walk on it, and if you are using a metal wired cage, move to a glass cage. You can also close the class cage with a well-fitted lid.

How Long Do Gerbils Sleep?

Sleep is essential for a healthy lifestyle. If a gerbil cannot sleep enough due to stress or any health issues, it will quickly get sick.

As a whole, gerbils usually sleep around 12 hours a day. They tend to be awake for 2 to 4 hours and sleep for the same amount of time. This sleep pattern continues throughout the day.

The need for sleep can differ between gerbils. It is dependent on various factors such as the age of the gerbil, the environment it lives in, any health issues, company, and interactions with the owner.

Very young and very old gerbils tend to sleep more, while adult gerbils are the most active and energetic ones.

Mongolian gerbils live in areas where the days are sunny, dry, and very hot, while the nights are dry and very cold. Gerbils will try to avoid extreme temperatures and sleep in their nests in their tunnels during these times. Gerbils in captivity quickly adapt to the moderate temperature and learn that it is ok to be awake in the middle of the day or night, as well.

Sick gerbils sleep more and will appear tired. If an adult gerbil appears to be less energetic than the other gerbils, you might want to take it to the vet.

Gerbils are social animals and need their gerbil family. They often cuddle with each other when they are asleep. The company comforts them and allows them to sleep calmly. A lonely gerbil will most likely wake up more often.

Interaction With the Owner

Pet gerbils tend to adapt their sleeping pattern to the owner. But that highly depends on how much the owner interacts with the pets.

If a pet owner spends most of the day at home, close to the gerbil cage, and interacts a lot with the gerbils, they will start to sleep more during the night to be able to spend more time with the owner.

Where Do Gerbils Sleep?

The Mongolian gerbil lives in the Mongolian steppe and builds tunnels and burrows where they spend their time resting and sleeping.

If you own gerbils, you might see them reposition during their nap times. If gerbils pile up in an open space in the cage, they sometimes wake up, crawl under the pile of other gerbils and directly go back to sleep.

Probably the top gerbil gets a little cold sometimes.